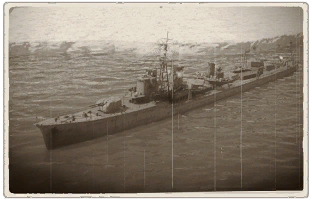 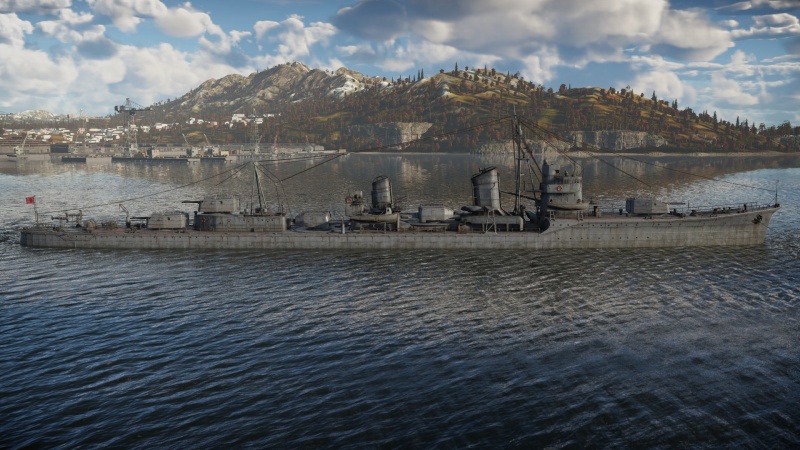 The Yugumo-class, IJN Hayanami, 1943 (早波, namesake: Early Waves) is a premium gift rank II Japanese destroyer with a battle rating of 4.3 (AB/RB/SB). It was introduced during Update "Winged Lions" as a reward for the 2021 Operation W.I.N.T.E.R. event.

Just like its sister-ship Yugumo, Hayanami upgrades over IJN Ayanami in survivability, primarily due to its lower profile, but also higher crew count. Notably, the Yugumo-class has a much lower freeboard, lower forecastle, and much smaller smoke funnels. This in effect gives it a better chance of avoiding enemy fire, especially at the long range, even though overall it is a longer ship. Additionally, its survivability is further aided by having ammunition stored deep underneath the water line, and having torpedo turrets protected against fragmentation damage, though they are still one of the easiest components to damage on the ship.

Hayanami comes spaded as a premium and has a max speed of 79 km/s. Overall its relatively comparable with equivalents in other nations, if not slightly slower, though the differences are within 5% range between most of the destroyers in the same BR. The maximum reverse speed is -31 km/h spaded.

Like all regular Japanese destroyers, the Hayanami has 3 turrets boasting dual Type 3 127 mm cannons, offering the same capabilities and the same shell choice as the IJN Yugumo. Though as Hayanami sees the same risks in BR, her captain will have to rely on very accurate gunnery and torpedo laying abilities to keep the ship afloat.

The Hayanami is equipped with three twin mountings of the 25 mm Type 96 autocannon, 1 more than her sister Yugumo. Its setup clearly plays a primary role as an anti-aircraft weaponry, having turrets located to provide optimal AA coverage, however they are classified as an auxiliary armament and will use those crew skills instead of anti-aircraft. The high-explosive type rounds this gun fires will have no trouble knocking out any airplane it hits. AP type rounds are also available and can be used against small torpedo boats that want to sneak. Each twin mounting is placed on side of the ship which mean they can't shoot at the same target unless its aircraft.

Like her sisters, Hayanami uses the very potent Type 93 Model 1, Mod 2 torpedoes. Those are the second most powerful torpedoes in-game just after the Type 93 Model 3 variant, which enables it to sink nearly any destroyer with a single hit. To compare with equivalents of other nations, Hayanami's torpedoes have an equivalent of 627.2 kg TNT, while German G7a has 358.4 kg, British Mk.IX has 340 kg, and US Mk.15 has 224 kg, all also having much lower range and slower speed. It's one of the best torpedoes available, bested only by Type 93 Model 3 or more modern anti-ship torpedoes, such as Mk.16.

Hayanami also has the ability to equip 8 Type 95 depth charges. All are stored above deck and ejected pneumatically to either port or starboard, up to four on each side.

Depth charges currently have an extremely limited use, having no submarines in the game and being limited to a combination of a static position where they were dropped at, and a specific time at which enemy has to arrive in order to risk any damage from the charge.

Like all torpedo-centric destroyers Hayanami excels in Arcade Battles with the ability to restock torpedoes mid-battle, but has a much tougher time in Realistic Battles. With her mediocre survivability and lack of AP shells, it's always best to sit back and make use of the 20 km range the torpedoes offer. While playing Arcade, it's best to keep distance and use the cannons as a secondary, whereas in RB torpedoes should be prioritized for heavier and deadlier targets such as cruisers and not instantly thrown in the water, closing the gap towards a capture point to capture and rearm while defending off against other ships with the main cannons.

Main article: History of the Yūgumo-class

The Japanese Yugumo-class destroyer Hayanami was completed in December 1942 at the Maizuru shipyard, and entered service in the summer of 1943. In the autumn of the same year, she escorted transports and landing ships on routes from the Japanese metropolis to the Micronesian islands and to the Solomon Islands. On June 7, 1944, the destroyer was torpedoed by the American submarine USS Harder near the Tawi-Tawi Islands, an explosion occurred on the ship and the destroyer sank. The 45 survivors were saved by the destroyer Urakaze.