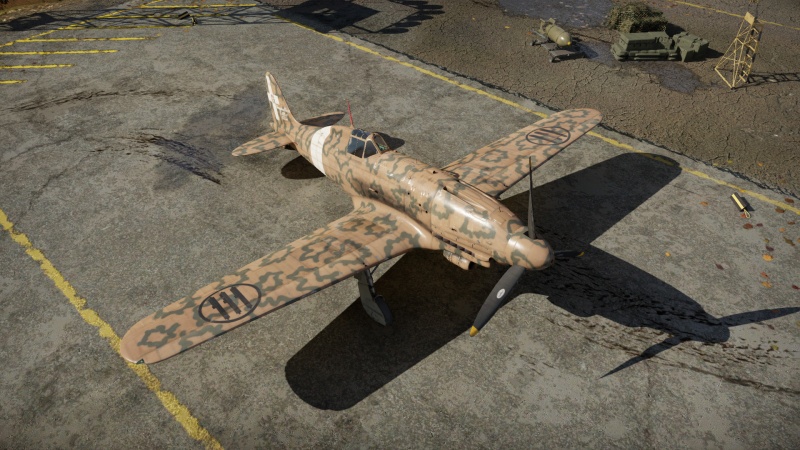 The C.205 is an excellent climbing aircraft, with a fairly good top speed and roll rate. It does not rip easily or compress, and remains fairly responsive at all speeds.

The C.205 Serie 1 is perhaps the most underrated rank III Italian fighter, most likely due to the underpowered armament which consists of 2 x 12.7 mm and 2 x 7.7 mm Breda-SAFAT machine guns. This can be a serious problem since this fighter is Boom & Zoom fighter, meaning even a successful pass will badly cripple the target instead destroying it. Therefore, stick with teammates in order to support them. The C.205 Serie 1 works well when escorting bombers.

This fighter can climb fast for its rank and battle rating, thanks to DB 605-A which was installed in Bf 109 G-2, even in stock. The C. 205 serie 1 could climb up to 5,000 m in to seek enemy planes, but higher than 6,000-7,000 m is recommended for safest altitude. Use this advantage when retaining energy, to outrun enemies or gain altitude if the first pass failed and make up the second pass. Although the engine provides considerable manoeuvrability, one should not do excess dogfighting toward the target, as it will burn up energy faster. Never attempt to make contact with manoeuvrable fighters, like Spitfires and Yaks, especially at low altitude. Call teammates, then gain some altitude until the enemy cannot pursue. Use this chance to make a counter-attack and destroy the enemy. One thing to note, this plane's propeller pitch can be tweaked to the maximum value without blowing the engine, unlike all Bf 109s with the same engine when using manual engine control.

When in stock, the armament leaves much to be desired: low velocity and ball ammunition limit the effectiveness of the weapon. Never attempt to head-on by any means; chances are the opponent's bullets will reach the C.205 before its own. One thing should be noted: while the C.205 has a powerful engine at its battle rating, never intercept bombers without teammates, especially when down-tiered. However, these machine guns prove quite effective against dive-bombers or low-flying bombers. Try to aim for the wings or the engine(s) for a desirable hit. Adjust the machine gun convergence to 250-300 m for the most effectiveness. It is recommended to load Air Targets or Universal belts for the 12.7 mm machine guns, along with Stealth belts for the 7.7 mm machine guns.

Overall, C. 205 serie 1 is a support Boom & Zoom fighter with good climb rate, reasonably fast for its battle rating. While being overshadowed by underperformed armament among all the fighters, in the hands of a skilled player this fighter became a bane among all the enemy fighters and even to bombers.

The last Italian fighters of the war (the Serie 5, or "third-generation") all used the new German Daimler Benz 605 engine, putting them on a par with the best mid-war aircraft. The M.C. 205 was the only one of the Serie 5's to see much service with the Italian air force. The prototype, based on the M.C. 202, first flew in April 1942. The added power allowed it to become the first Italian aircraft with cannon armament in the wings. It was considered extremely manoeuvrable at middle and low altitudes. About 200 were built and delivered starting in October 1942, seeing combat service in the Mediterranean and Sicily the next year. Another 112 were built after the armistice and delivered to Fascist Italian forces, who used the plane until summer, 1944. Others continued on in Allied use and after the war remained in service as combat fighters until 1947.