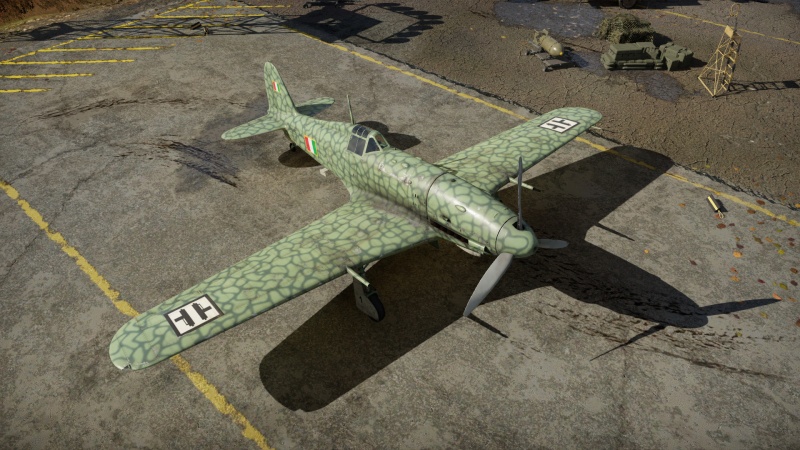 The G.55S is a premium rank IV Italian fighter with a battle rating of 5.3 (AB), 5.0 (RB), and 4.7 (SB). It was introduced in Update 1.69 "Regia Aeronautica" as a pre-order premium pack prior to the update that also allowed access into the Italian Closed Beta Test. The G.55S was discontinued from the store after the 2019 Summer Sale, but was later reintroduced for War Thunder's 7th Anniversary as a premium purchasable in-game for Golden Eagles

The historical purpose of the G.55S was to fulfil the role of a torpedo fighter. In game, the G.55S can easily play this role on maps such as Norway. This is simply a matter of flying to the enemy ships, dropping its payload, and then proceeding to jump in on any nearby fight to engage enemy aircraft.

When the G.55S is not being used as a torpedo fighter, it is best used as a low to medium altitude (2-5 km) fighter. With three MG 151/20 autocannons, it will make short work of all fighters and with careful aiming, can be used to effectively destroy heavy fighters and even the heaviest of bombers.

When attacking heavily defended targets (ex. B-17 bombers), approaching from the rear, where the enemy has most defensive turret coverage, is not recommended. Fiat G.55 series aircraft (in general) do not have much armour. The armour is only comprised of a 50 mm bullet proof windshield and an 8 mm armoured steel seat. There are no armoured headrests or floor plates to offer increased pilot protection from bullets coming from underneath or behind the plane.

Arcade Battles: Once in the game, climb to a suitable altitude. The G.55S's high climb rate ensures that the plane can quickly gain an altitude advantage over its adversaries. Once altitude superiority has been achieved, practice Boom & Zoom tactics against enemy planes and take them out in high-speed fly-bys. Due to the low armour on the G.55S, it is not recommended to loiter about. Rather, minimize the time being targeted by enemy vehicles.

With three 20 mm autocannons, a good burst on a target can cripple an enemy aircraft. Due to the Minengeschoß rounds, one attack run on a bomber or attacker can easily shred off a wing, and fighters often explode into a fireball once hit.

As Arcade Battles provide in-air resupply of suspended armaments and reduce their negative effect on the aircraft's performance, it is entirely possible to enter the battlefield wielding bombs and torpedoes for a fighter-bomber role. Fly towards the enemy ground/naval targets and bomb away, then while the payload reloads, climb up to a sufficient altitude and focus on fighting enemy planes while the reload time ticks down slowly. With the excellent climb rate, it is rather easy to transition between the two tactics while retaining energy for sufficient speed and mobility against the enemy.

With most planes, diving into furballs is not recommended. However, the G.55S performs very well in such dense and fast-paced engagements. A furball battle provides little time-on-target, but the incredible armament of the G.55S can down an enemy in a split-second. The plane's solid turn rate allows it to find firing solutions easily while staying out of enemy planes' firing lines. When turning with elevator, rudder, and flaps, the G.55S can even turn with Spitfires.

Realistic Battles: When used as a fighter, this plane is highly capable, but it has some weaknesses that need to be avoided. This plane does not climb as well as some aircraft (such as theC.202 Folgore), but it still has an exceptional climb rate: expect to be above most enemy fighters in nearly every battle. Climbing to an altitude of 4-5 km is a breeze, and only some Spitfires will be able to outdo the G.55S in this regard consistently. It should be noted that while the G.55S is rated for a maximum speed at 6,500 m, its rate of climb falls significantly at approximately 5,000-5,250 m, from ~21 m/s to ~10 m/s.

It should be noted that while the use of WEP will increase the rate of climb, the aircraft's engine does tend to overheat under these circumstances. On cold maps such as Battle of the Bulge, WEP may be used almost continuously, but it should be used with much caution on hotter maps like Tunisia. If the engine does overheat, reducing the throttle to around 90% will quickly cool it down.

Despite the aircraft's excellent climb rate, it is not necessary to climb to high altitudes in this plane. As a turn-fighter, it can compete with the enemy even when it has an altitude disadvantage. If the G.55S is used to climb towards the enemy at low-mid altitude, it can surprise and destroy multiple enemies before it needs to turn back towards its friendly team.

The Fiat G.55S performs optimally between the altitudes of ~1 km to ~4 km. At these altitudes, the high climb rate allows the plane to pull away from pursuing enemies easily, or to have a chance to dive away from an unfavourable engagement. It performs well above ~280 km/h, and it can use combat flaps to make quick turns below ~425 km/h. While it won't hold a turn as well as a Spitfire, it is quite manoeuvrable and turns better than many American aircraft.

When attacking heavily-turreted targets (such as B-17's), approach from the sides, front, or from above and below. An approach from the sides presents the enemy with a difficult shot to lead, as makes any approach from above. (However, beware of planes like the P-61C-1, which has powerful upwards-facing turrets.) When approaching from below, beware of airspeed: although the G.55S sports a powerful engine and high rate of climb, its low-speed manoeuvrability is not exceptional and zoom-climbing to meet an enemy bomber may, therefore, be fatal. By far, the best way to attack an enemy bomber is from the front. It is comfortable from this angle to knock out the enemy with a pilot-snipe or to destroy critical modules such as the engines. Additionally, the vast majority of enemy bombers do not have any forward armament or front-facing turrets with which to defend themselves.

The G.55S is slower than many planes at its Battle Rating, especially with American planes such as the P-47. If such a plane is pursuing the G.55S from behind, it is best to turn towards allied aircraft for assistance or to turn and engage before the enemy draws near. It is usually impossible to outrun a tail.

Simulator Battles: For players with little experience with "Full Control" and mouse joystick, it is simple to take off with slow throttle input and reasonably docile. The high ammunition count and strong armament make shooting easier for pilots who are beginning to learn to aim in Sim Battles.

Visibility in the cockpit leaves much to be desired—the headrest behind the pilot is not given any armour value for pilot protection. Still, it does a beautiful job of blocking rear visibility. There are no mirrors to use, and the canopy has some fairly thick metal sections that prevent portions of view to the left and right.

Giuseppe Gabrielli, an aeronautic engineer working with Fiat and was responsible for the G.50 Freccia, started on an aircraft design around the DB 605, which would eventually be known as the G.55. The first prototype of the G.55, known as the Sottoserie 0, flew on 30 April 1942, piloted by Valentino Cus and showed it had very favourable flight characteristics. The armament arrangement was considered troublesome to reload, so the layout was modified and this later design became known as the serie 1. The prototype flew against the Macchi C.205 and the Reggiane Re.2005 that were also built around the DB 605 and proved the second best performing of the three. It was eventually adopted for mass production alongside the C.205 for the Regia Aeronautica and named the Centauro ("Centaur"). 1,800 G.55 were commissioned to be built, which was later raised to 2,400 planes. Despite these optimistic production plans, only 274 were produced during the war, with 75 more made after the war. The planes served in both the Regia Aeronautica and then the pro-Axis Aeronautica Nazionale Repubblicana after Italy after their 1943 Armistice.

Initially, the Regia Aeronautica used the Sparviero medium bomber as its plane of choice for combating ships with torpedoes. As World War II progressed, Sparviero bombers were met with more advanced allied fighters, and the decision was made to acquire an aircraft capable of carrying a torpedo faster, that could also have some possibility of fighting allied fighters on equal footing. Initially, Fiat considered adapting the G.55 to carry a torpedo, but Fiat decided that a new design - the G.57, would be more suited to the task, and would utilize a radial engine. After the project for the G.57 fell through, Fiat returned to the idea of adapting the G.55 as a torpedo fighter.

Fiat took a production G.55, and the modifications commenced to transform it into a torpedo fighter. Modifications included changing the single radiator for two radiators moved to each side of where the torpedo would be mounted, lengthening the tail wheel as well as giving it a stiffer shock to handle the added weight of a torpedo, as well as a small cowling added to reduce the drag of the rear tail wheel. After modification, the G.55 was capable of mounting a 920 kg torpedo, fulfilling its design role as a torpedo fighter that could engage allied fighters when needed.