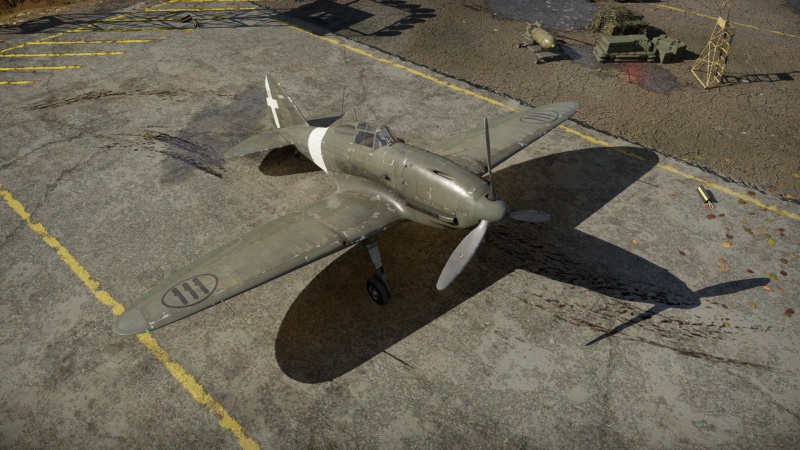 The Re.2001 is a fairly balanced fighter with more emphasis on turning performance than speed. The listed top speed of 545 km/h in realistic battles is good for its battle rating. At sea level, it can only reach about 460 km/h. As the Spitfire-esque elliptical wings might suggest, it is adept at turning and will only be exceeded by Spitfires and Japanese aircraft. The other characteristics such as climb rate, roll rate, and energy retention are good to average.

The Re.2001 has enough armour to not get pilot-sniped by rifle calibre weapons from behind, but its overall survivability is poor. It has no bulletproof glass to protect the pilot from the front and the fuel tanks are scattered around the aircraft. If ignited, the results are usually fatal.

The Re.2001's greatest strength is its turning capability and its greatest weakness is its poor armament. This means that it should be primarily used against other fighters as opposed to hunting bombers or heavy twin-engined fighters. It is best to drag opponents into extended engagements since it is unlikely that the Re.2001 will be able to destroy a target in one pass.

At the start of a match, try to climb and gain some altitude. If using MEC, open the radiators fully, set the propeller pitch to 66% and keep an eye on the engine temperatures. If things get too hot, dial back the throttle and let the engine cool off. Scan around for enemies. The best targets are those that are fragile, less manoeuvrable than the Re.2001, and at a lower energy state. If you have a significant altitude advantage over your target, dive in, make a pass, then loop around. Repeat until your target has lost significant energy, then try to jump on their tail and hose them down with the machine guns. If you can force them to constantly manoeuvre and corral them into a turnfight, the results will usually be in your favour. A faster opponent that chooses to run instead can be difficult to dispatch. In that case, let them go and start climbing to reset the engagement.

Avoid committing to head-ons since the Re.2001's complete lack of frontal armour protection, poor machine gun ballistics, and fragile liquid-cooled engine do it no favors. Fire off a burst, break off early, and observe what your target does after the merge. If they commit to a turnfight, again try to latch onto their tail. If they continue their course and are fast enough to escape, let them go and try to conserve your own energy.

Be wary of engaging targets that are as or more manoeuvrable than the Re.2001 in turning engagements. Try to obtain an altitude advantage before engaging and stick to boom-and-zoom or energy fighting tactics instead of flat turning. A Spitfire can put up a very tough fight if it has the same energy level as the Re.2001, but as with any plane, it becomes less threatening with less altitude and speed. Other targets that should be attacked with caution include planes with decent defensive armament like the IL-2 M-82. There is a very real chance that the IL-2's rear gunner can ignite or pilot-snipe the Re.2001 more quickly than it can whittle down the "flying tank" in turn. Large bombers with multiple engines and gunners are similarly hazardous. If you must engage these, try to set their engines on fire and break off.

As with other Italian fighters, a large number of Re.2001 variants were explored. The Re.2001 CB was a fighter-bomber variant equipped with bomb racks and the Re.2001 CN was a nightfighter variant with a pair of MG151/20 cannons mounted in the wings. The navalized Re.2001 OR was made in anticipation of the Italian fleet's planned aircraft carriers, though none were completed by the end of the war and the aircraft were modified back for ground-based use. The Re.2001 GV variant was capable of mounting a 630 kg bomb for attacking aircraft carriers. In its one and only operational use, a pilot managed to lob a bomb onto the deck of the carrier HMS Victorious, but it failed to fuse and bounced harmlessly into the ocean. The GV was thus abandoned. Several other photo reconnaissance and testbed variants were created.

In operational service, the Re.2001 first saw combat in 1942 over the skies of Sicily and Malta in bomber escort roles. They fared well against opposing RAF Spitfires and Hurricanes at medium to low altitudes but lagged behind above 7000 meters. In their first engagement, two Spitfires were shot down by Re.2001s for no fighter losses. They were used in intense fighting, and one notable battle in June 1942 saw 9 Re.2001s and 12 C.202s escorting an Italian naval convoy. The fighters successfully protected the fleet from RAF fighters and torpedo bombers, and the ships managed to nearly wipe out a British cargo convoy bound for Malta.

Over time, attrition dwindled the numbers of Re.2001s in Italian service. It was never produced in large numbers due to the difficulty of its construction and the limited availability of engines, which were prioritized for the C.202 instead. Only 71 Re.2001s were operational by the summer of 1943 and the Allied invasion of Sicily cut their numbers further. The Italian armistice in September 1943 saw a portion of the 33 surviving Re.2001s transferred to the new Co-Belligerent Air Force, where they fought alongside the Allies against the Italian Social Republic and Nazi Germany until the end of the war. Combat aside, they were also used on a few occasions to carry money in underslung containers.