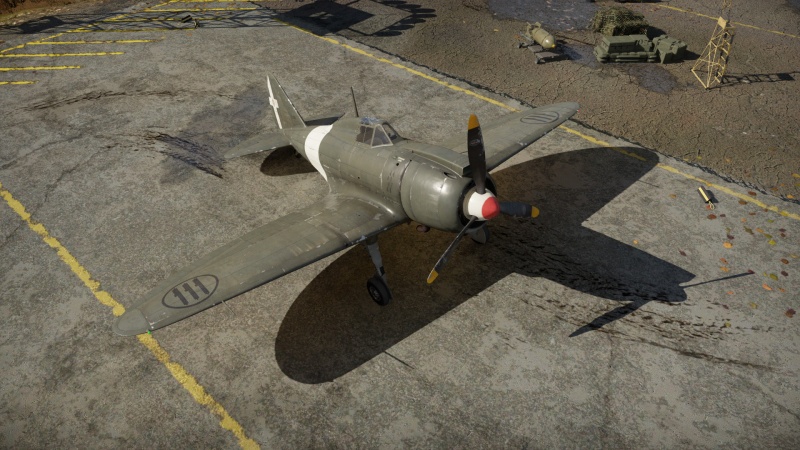 While the Re.2002 looks like a modernized variant of the Re.2000 (and is, in fact, a design derived from the Re.2000), one must never forget the Re.2002 was designed to be a fighter bomber, not a pure-bred fighter. It does have a more powerful engine, but its overall weight is noticeably higher. Combined with rather bad climb rate and mediocre manoeuvrability, the Re.2002 is really an attacker disguised as a fighter. It is thus recommended to treat it like a single-seat attacker and use the corresponding playstyle.

Given its low manoeuvrability, bad climb rate and low speed, the Re.2002 should be used as a single-seat attacker. For this purpose, it can carry quite a formidable payload for its size and rank - a single 250 kg bomb and up to 2 x 100 kg bombs, which adds up to 450 kg. In the air RB, this payload will come in handy for destroying a pillbox or two or knocking out some tanks, and you can use your MGs against softer targets.

However, if you do end up in an engagement, note that you can even deploy your take-off flaps up to 428 km/h, which when combined with brief bursts of WEP can sometimes provide a nasty surprise for an enemy fighter that thought it had the low-altitude manoeuvre advantage against all those slow, vulnerable ground-attack planes. And low-altitude fights are the ones you are likely to have in this machine.

However, it is in ground RB where the machine is truly useful. Given its low battle rating, its top payload is fully able to destroy any tank on the given BR spread and its 250 kg bomb has enough punch to knock out multiple targets if you're lucky (or skilled) enough to hit a cluster of thin-skinned vehicles. You can also use the Re.2002 as an impromptu dive bomber with the advantage of being able to defend itself against enemy fighters. But don't mistake the Re.2002 for a proper CAS plane, as it lacks the payload and the armour protection for repeated attacks, especially against prepared AA defense. The Re.2002 is thus great for hit and run attacks, after which you can either return to your airfield and rearm, or you can climb a little and try to pick off any sneaking enemy CAS aircraft.

With a subpar agility, climb rate and speed, but possessing a good payload for its rank, the Re.2002 is an attacker disguised as a fighter and should never be brought into a direct dogfight. Also, beware of head-on engagements: the only thing protecting your pilot from the front is a small piece of armoured glass and a large Piaggio radial engine that loves to catch fire.

Reggiane had been unable to find sufficient DB 601 engines (being produced on license in Italy) to keep up with demand for the Re. 2001, so they switched back to a Piaggio-designed radial. This meant the wing system of the Re. 2001 could be kept in the new model. It first flew in October, 1940, and the Italian Air Force placed its first order in September, 1941. It first became operational in July of 1943, during the invasion of Sicily.