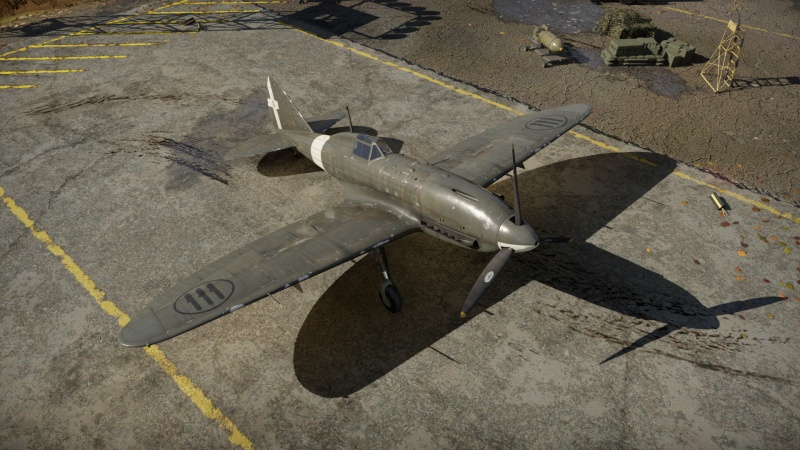 With spectacular turning capabilities, excellent energy retention, adequate roll rate and solid climb rate, the Re.2005 Sagittario is the definition of agile. It can turn on a dime and keep its speed through those turns, allowing it to be a fantastic dogfighter capable of out-turning almost everything - spare the occasional Japanese fighter - with the correct usage of the rudders and combat flaps. The main weakness of the 2005 is its comparatively mediocre speed for a prop aircraft at its battle rating, being worse than most of its German, American, British and certain Russian contemporaries. Despite this speed gap, it holds quite a high diving speed along with excellent acceleration, allowing you to catch up to faster targets quickly after an overshoot. 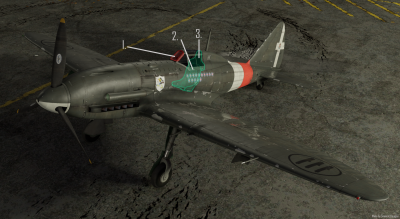 Armour diagram of the Re.2005 serie 0, corresponds to the list on the left
Crew1 person
Speed of destruction
Structural800 km/h
Gear320 km/h

Two of the cannons are mounted in the wings with the remaining cannon being a nose-mounted Motorkanone that fires through the propeller spinner. Each cannon is armed with the same amount of ammunition, which means that all wing-mounted guns will fire together until empty. Never use the Bredas as the main weapon, as they do mediocre damage beyond 300 m and are only useful for lining up shots or forcing enemies to turn.

The Re.2005 serie 0 can be outfitted with the following ordnance:

The Re.2005 is a classic dogfighter, with surprisingly amazing manoeuvrability that can catch most enemies off guard and shred them with its excellent armament setup. While the aircraft can tailor to most forms of air combat, it should ideally be used as a mid-to-high altitude energy fighter or turn fighter where it can use its amicable energy retention and spectacular manoeuvrability to its advantage.

Example of the Vertical spiral, which the Re.2005 can easily abuse

You should make use of energy-wasting manoeuvres such as vertical spirals and hammerheads to bleed the enemy of their speed advantage and force them to fight on your terms.

Of course, the large underslung payload available means the Re.2005 can be a decent ground-pounder as well, being able to drop its bombs quickly and engage the furball. While the Italian bombs are nothing spectacular, they can get the job done fairly well. However, it is worth noting that carrying the largest payload available has a noticeable impact on performance and forces the aircraft into the area it suffers the most in, that being low altitude where its once decent speed becomes extremely poor, compounded by the fact its carrying bombs.

It has been called "the most beautiful fighter aircraft of the war" and "aerodynamically perfect". The Re. 2005 was the final version of the basic Reggiane fighter design that began with the Re. 2000 in 1939. The third of the Serie 5 third-generation Italian fighters designed to take the DB 605 engine, it had numerous improvements over the company's previous models. Test flights on the prototype began in April 1942, three weeks behind the third-generation M.C. 205 and nine days behind Fiat's G.55. But only 29 of the planned 750 were ever built. Operational service began in May 1943 with the 362nd Squadron in Sicily, and then Capua, until the armistice. A few are known to have flown in battle for the German Luftwaffe over Berlin in the final days of the War in Europe.

Being the last of the three Italian Serie 5 fighters to be introduced to the game, the Re.2005 is simply a must-have for avid fighter pilots, not only due to its excellent flight characteristics but also due to, let's be honest here, its absolutely stunning visual appearance too!

Having touched on the subject of the Re.2005's flight characteristics, these are best described as a middle ground between the Spitfire and Bf 109 fighters. The Sagittario manages to successfully combine superb top speeds and climb rates with tight turn times and sharp roll rates, making it an overall highly versatile fighter with no distinct disadvantages.

In other words, or numbers to be more specific, the Re.2005 can reach a maximum top speed of 650 km/h at an altitude of 7,000 m while retaining an average climb rate of about 21,2 m/s, thanks to its 1,475 horsepower V-12 inline engine. This makes it an ideal energy fighter in the early stages of an air battle, while it's very good agility will also allow it to pull its own weight in intense manoeuvring engagements as the battle progresses.

While you'd be forgiven for thinking that such promising flight characteristics must come at a price of offensive capabilities, the Re.2005 will spare no time in proving you wrong. In fact, the Sagittario is quite formidably armed with a pair of 12.7mm Breda-SAFAT machine guns, mounted underneath the engine cowling, in addition to three 20mm MG 151 cannons, with two being mounted in the wings and one installed through the propeller hub.