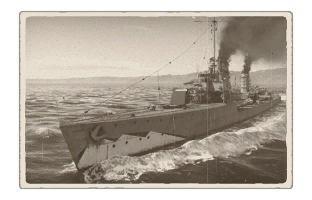 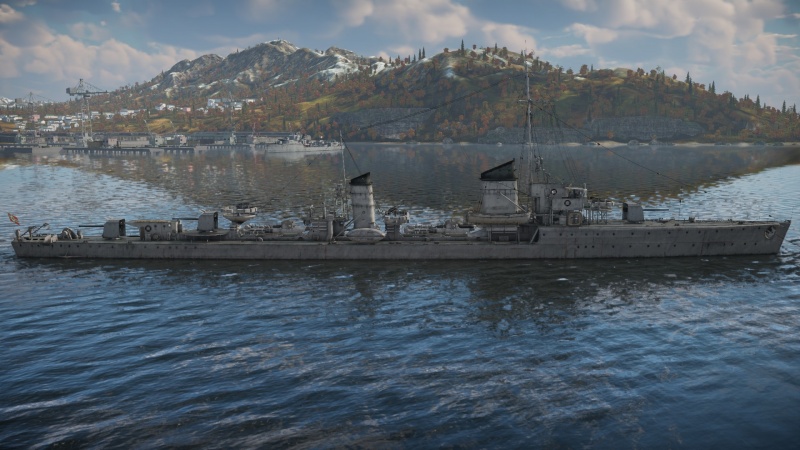 The Raubtier-class, Jaguar, 1941 is a premium gift rank II German destroyer with a battle rating of 3.7 (AB/RB/SB). It was introduced during Update 1.95 "Northern Wind" as a reward during the 2019 "Operation F.R.O.S.T" event.

With a construction made of steel and a crew of 120 sailors, the survivability of the vessel is normal, but not great. The ship may resist one or two shots from a Destroyer, but will quickly be sunk if you do not do anything to evade fire.

Instead of using 12.7 cm cannons like its sister ships, the Jaguar uses the 10.5 cm cannons. While being smaller than the guns of its contemporaries, they can still perform effectively with a lower reload speed. They offer a little more forgiveness to the player, while often offering less to the target. The damage dealt by the HE round with the base fuse, along with its reload, allows the player to whittle away at the target, and with a little aiming, can render the target completely defenceless.

The ship is equipped with two 20 mm guns as secondary armament. This guns can provide a little protection against low-flying aircraft or the smaller torpedo boats. It's difficult to take down an aircraft, but the rate of fire and the standard belt can make planes opt to target less defended vessels. Against torpedo boats they are not a great help, but they can deter smaller boats from getting close enough to deploy their torpedoes accurately.

Two triple G7a torpedo launch tubes are mounted on the ship. The G7a is very effective against any opponents the Leopard might have to face at its BR. 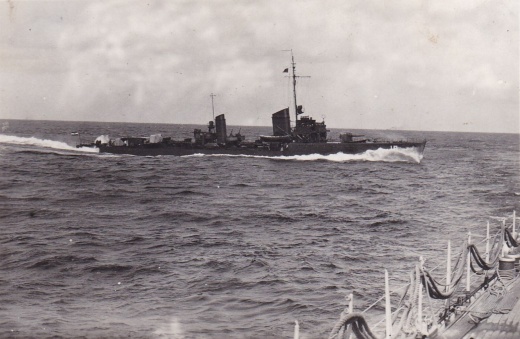 The Type 1924 "Jaguar" was a heavy torpedo boat of the six-ship "Type 24" class. Built for the newly-established German Navy in the 1920s, the ships were extremely heavily-armed for a ship of their size. She sailed on several non-intervention patrols for the German Navy during the Spanish Civil War, and laid many minefields during the Second World War. By the start of 1942, Jaguar was one of two remaining ships of the class still afloat; she served until the D-Day landings, where she was sunk by allied bombers while in port at Le Havre.

The "Type 24" class of 1924 were a class of six heavy torpedo boats built for the German navy. Despite them being extremely heavily armed and close to destroyer-size, they were classified as torpedo boats by the German navy. In War Thunder, these vessels are classified as destroyers. The ships displaced 1,300 tons full load and could make a top speed of 34 knots (63 km/h). They had a crew of 129 crew members, which was relatively small for a destroyer but large for a torpedo boat. Jaguar carried three 10.5 cm (4 inch) naval guns, as well as six 533 mm torpedo tubes. Later on, she received four 2 cm Flakvierling anti-aircraft guns for air defence. Jaguar was the last ship of her class to be laid down, in May 1927 at Wilhelmshaven. Following her completion, she was commissioned in August 1929.

After her commissioning, Jaguar was commissioned into the 3rd Torpedo Boat flotilla along with her sister ships. During the late 1930s, she made several non-intervention patrols in the seas off of Spain due to the Spanish Civil War. At the start of the Second World War, Jaguar made numerous anti-contraband patrols with her sister ships, then sailed towards Norway to provide support for the German Norwegian campaign. During this time, she escorted the heavily-damaged pocket battleship Lutzow after she was torpedoed, as well as the Scharnhorst. She also participated in extensive mine-laying duties, laying mines in the North Sea and off of Dover (in the United Kingdom).

In February 1941, Jaguar escorted the battlecruisers Scharnhorst and Gneisenau to the French port of Brest after their North Atlantic raid, and soon after escorted them back out on the Channel Dash. She later the battlecruisers, along with the battleship Tirpitz, on their voyages between various Norwegian fjords and inlets. In June 1943, Jaguar recommenced her usual role, and laid more mines in the North Sea. In early 1944, Jaguar laid more mines in the English Channel; at this point, she was based at the port of Le Havre. However, it was there that she met her final fate. In June 1944, shortly after the D-Day landings, RAF bombers bombed Le Havre with the goal of destroying all German ships there. Jaguar, along with her sole remaining sister ship, Falke, were both sunk by bombs.