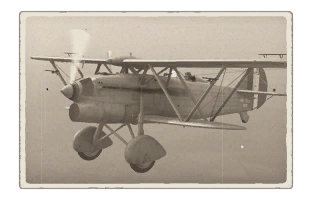 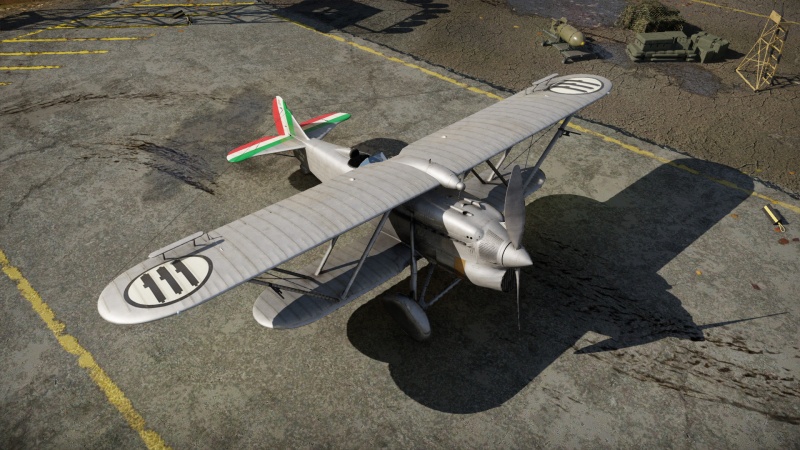 The CR.32 is a rank I reserve Italian biplane with a battle rating of 1.0 (AB/RB/SB). It was introduced in Update 1.69 "Regia Aeronautica".

The two machine guns are clustered in the nose of the aircraft, just in front of the pilot. Each is armed with the same amount of ammunition.

The best way to use the CR.32 is by playing as a support. As a biplane, you can easily outturn most opponents. However, the most deadly thing about the CR.32 is its twin 12.7 mm Breda-SAFAT machine guns. Equipped with air targets belt, it can easily set other planes on fire. The only downsides of the plane are the lack of protection and speed. The recommended tactic is to always have an altitude advantage over your enemies. Do not turn too much and fire your machine gun in bursts as you have limited ammo, this means you have to be more careful when engaging targets. With a top level speed of only 380 km/h, the CR.32 will be usually outrun by most opponents it faces. Instead, climb to much higher altitude, then use its surprisingly fast dive speed to execute boom-and-zoom attack to kill an unsuspecting opponents. While it can dogfight against monoplanes to some extent, the CR.32's poor energy retention will eventually catch up and slow down the plane significantly, be decisive and strike at enemy weak points (engines, pilot, etc.) to finish them off as fast as possible.

The FIAT CR.32 fighter biplane was developed by the Celestino Rosatelli, an Italian aeronautic engineer, who designed various planes, such as the CR.32, CR.32 quater, CR.32 bis, CR.42, CR.42 CN, B.R.20DR, B.R.20M M1, and many more. After the development of the CR.30, Rosatelli modified it, changing the structure around the engine, the fuselage was the same as the CR.30 but without the supplementary tank, the armament constituted of 2 SAFAT 12.7 mm, and a transmitter, bomb thrower, or camera could be added. This plane was designated with serial number MM 201.Tested at Montecelio, the CR.30 (MM 201), later named CR.32, demonstrated as a perfect fighter and was the perfect conception of Italian fighter biplanes with a balance of manoeuvrability, performance, and military efficiency. In the mid thirties, the CR.32 was ordered by Regia Aeronautica, quickly replacing the CR.30, after which it was ordered by other nations. When the Second World War broke out, the CR.32 was already obsolete (and eventually replaced by the CR.42) but, in spite of that, it still equipped several fighter units. By 10 June 1940 the CR.32 was equipped for the following Gruppi Caccia (Fighters Groups): 24°Gruppo (52°Stormo) at Sarzana, 2°Gruppo at Grottaglie, 157°Gruppo (1°Stormo) at Trapani, 9°Gruppo at Monserrato, 160° at Tirana, 13°Gruppo (Partly) at Castelbenito (Libya), 8°Gruppo at Tobruk, 10°Gruppo at Benina and 163° Squadron at Rhodes. The first CR.32 to have been involved in military operations were those stationed in Libya, forty-odd machines being used mostly in ground attack missions together with the 50°Stormo's Breda 65s. The other front where the machine was used to the last example was Eastern Africa, fighting highly superior machines, such as Blenheims and Hurricanes. The old biplane closely followed the alternate phases of the campaign, from Italian advance into Egypt to the loss of Cyrenaica, they were widely used fairly successfully with various bomb types until January 1941. After the conquest of Crete in May 1941, CR.32s were relegated to fighting training duties. The CR.32 was used by Italy, China, Spain, Austria, Germany, Hungary, Venezuela and Paraguay. After the CR.32, other variants were created: CR.32 Bis, CR.32 ter, CR.32 Quater, CR.32 Quater CN, CR.32 Quater AS, CR.32 Serie 2. The CR.32 also had amazing characteristics which allowed the aircraft to be used by Aerobatic Teams from 1936 to 1939 in various aeronautic events.The 4°Stormo was first in exhibiting in 1936 in Rome with a ten-machine patrol. 1936 also marked the rebirth of 6°Stormo Caccia, equipped with CR.32s, which soon established an aerobatic patrol of its own at its bases at Campoformido and Gorizia.From 1937 to 1939 the Aerobatic Teams did aeronautic events in Budapest, Zurich, Perù, Chile, Argentine, Brazil, and finally Berlin.

The CR.32 had its baptism of fire in the Spanish skies, the first twelve machines arrived by steamer at Melilla, Morocco, on 14 August 1936 and, together with the nine SIAI SM.81 arrived on 28 July, were incorporated into l'Aviacion de el Tercio. At the end of August, after further batches of CR.32s had arrived, the "Cucaracha" squadron was established at Cacéres, late to became the XVI Gruppo Caccia. In April 1937, the XVI Gruppo were joined by XXIII Gruppo "Asso di Bastoni" and VI Gruppo "Gamba di Ferro", after CR.32 was used by X Gruppo Caccia "Baleari" and the Squadron "Frecce". Thanks to the CR.32, the Legion's fighters quickly established supremacy over the red air forces, but in November a new fighter, the Polikarpov I-15, appeared and the battles with CR.32 were harder to win. After came the I-16, much faster than the CR.32, and the pilots of CR.32 were unable to fully exploit all the capabilities of their mounts and to follow the dog-fighting manoeuvres imposed by the nimbler FIAT biplane.