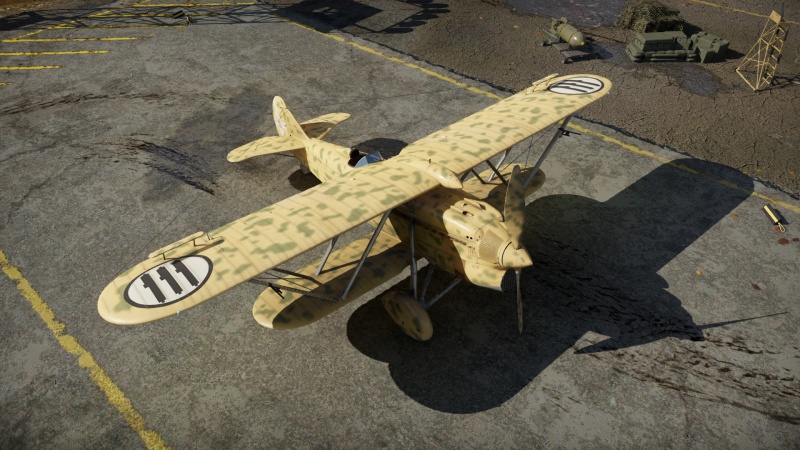 The C.R.32 quater fights are usually at low to medium altitude, the recommended fight altitude is around 1,000 to 3,000 m. Flying above ground level gives you the advantage of diving on your enemies, and you can also dive to avoid incoming fighters.

It has plenty of ammo, 350 rpg, which is enough to kill at least 2 planes. Its armament is also enough to kill a pilot in a single hit, which is similar to the P-26 Peashooter. It does, however, trade some manoeuvrability for superb diving capability. It can not turn fight Ki-10s, I-15s and is comparable to a Fury Mk II. It can fight pretty much anything it faces, but sometimes needs the help of a teammate.

The CR.32 Quater does not have a real playstyle that differs much from other biplanes. Compared to the Soviet and German biplanes, it is slightly less manoeuvrable because it has a little more structural resistance, this also means that it is able to absorb many more shots during fights. Its increased resistance allows it to absorb many hits from 12.7 mm MGs without causing too much damage to the aircraft. In these cases, each player is free to use the aircraft as he likes, being a biplane it is difficult to differentiate it from the others, but use it in pairs or in groups when possible because its slowness is a disadvantage in solo fights.

After the production of the CR.32 Ter, engineers added a few improvements: modified the windscreen, shifted backwards and increased the size of the OMI telescope sight, but most importantly the new variant had a slight increase in performance at low altitudes, and became the CR.32 quater.

When the Second World War broke out, the CR.32 was already obsolete (and eventually replaced by the CR.42) but, in spite of that, it still equipped several fighter units.

The CR.32 quater having been involved in military operations were those stationed in Libya, forty-odd machines being used mostly in ground attack missions together with the 50°Stormo's Breda 65s.

The other front where the machine was used to the last example was Eastern Africa, fighting highly superior machines, such as Blenheims and Hurricanes. The CR.32 quater closely followed the alternate phases of the campaign, from Italian advance into Egypt to the loss of Cyrenaica, they were widely used fairly successfully with various bomb types until January 1941. After the conquest of Crete in May 1941, CR.32s were relegated to fighting training duties.