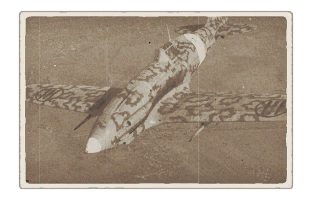 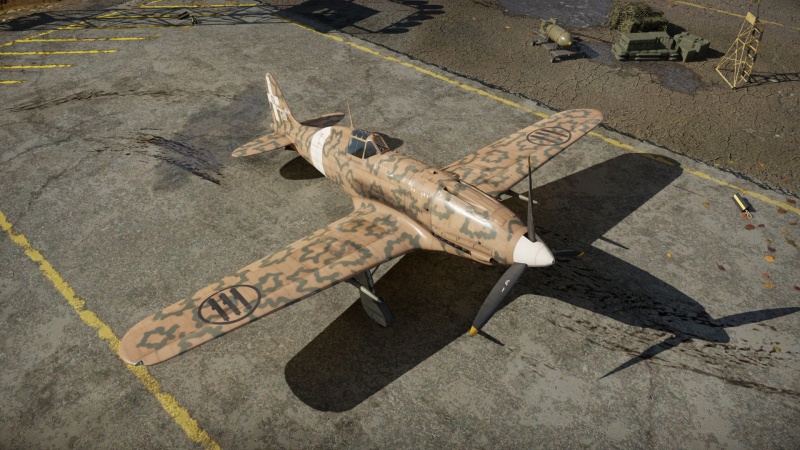 The C. 202EC is a rank II Italian fighter with a battle rating of 4.0 (AB/RB) and 3.0 (SB). It was introduced in Update 1.69 "Regia Aeronautica" alongside the initial Italian aviation tree. The "EC" in the name stands for "Esperimento Cannoni" or Experimental Cannons.

The Folgore ("Lightning") is a solid plane for its battle rating, especially in AB where its performance is exaggerated. With a decent climb rate when spaded, high top speed, good roll rate, solid energy retention, and two powerful MG 151's that have access to the dreaded German Minengeschoß round, this plane is devastating in the right hands.

However, one major issue the Folgore has is that it is hard to use for inexperienced players. The Folgore is a plane that does not allow for any mistakes. If you let its good performance get to your head, the only thing you'll get out of it is a burning Italian fighter. This is a plane that requires a high skill ceiling and a smart pilot to unlock its full potential.

The second major issue the Folgore has is that the twin Breda SAFAT's have low damage output. It needs quite an extended burst of fire to deal decent amount of damage. Furthermore, the Breda SAFAT's damage potential drops off when fired at ranges further than 300 m. This poor secondary armament also makes it less then optimal at engaging bombers and heavy fighters. The consensus by the community is that the best belts are Anti-Air, Tracer or Stealth for the 12.7 mm's, and Stealth or Air Targets for the 20 mm MG 151/20s. These tend to do the most damage.

While neither of these are crippling, they are something to keep in mind, especially due to the punishing nature of the plane.

In AB, the Folgore truly shines. A boosted flight model and increased performance make it a monster of a plane that any player should watch out for.

In essence very similar to the Bf 109 F with gunpods: Great climb rate and acceleration and with good top speed and turn rate. Yet the 20 mm gunpods dampen all positive aspects, performance was definitively traded in for firepower. Dive performance is great, yet the control surfaces lock up hard above 600 km/h IAS. So leave plenty of space to pull out of a dive, it reaches said speeds rather quickly! Even so the locked controls prevent G-force failure of wings - a blessing in disguise for many new inexperienced RB/SB pilots. Energy retention in Zooms is good, too. This however, is mostly due to the climb rate which is engine enabled. A damaged engine guts and severely hinders most flight characteristics.

Like its German brother in heart the Folgore also features several downsides: The engine torque is significant and will roll the aircraft to the side when performing any kind of manoeuvre. Note the slightly longer left wing to at least neuter this effect in level flight, unlike the Bf 109 pilots who will have to permanently trim their ailerons on the runway. Further aiming and aligning yourself to the target can thusly be rather difficult, as the craft will twitch and shift significantly. As usual lead in deflection shots are the easiest approach. The control lock up was already mentioned and must always be considered. The C. 202EC has a mediocre turn and climb rate and suffers from engine overheating.

The Folgore's focus on energy fighting should be reflected in the desired grind strategy. Compressor & Engine are the top priority, boosting the acceleration and climb to the maximum needed for most situations. The next upgrades are up to personal preference. New belts are always nice, but the default ones are decent.

The first most important thing the Folgore needs is Speed, and Altitude. It's generally a good idea to climb to at least 5,000 - 6,000 m before levelling out and gaining speed. From there on, it's Boom and Zoom, working your way from top to bottom. Priority should be given to P-39 Airacobras, F6F Hellcats and the early Spitfires, as these are hard to beat if they are allowed to engage on their terms. The Hellcat is a considerable problem for the Folgore, due to the fact its considerably faster and climbs only slightly worse. The best way of dealing with them is to fight them at speeds above 400 km/h, where the Hellcat begins to stiffen up, but you retain your very good roll rate, which you can use to spoil his gun solution by constantly changing direction.

While diving on your chosen target, be mindful of your speed: the Folgore's rate of roll becomes considerably worse when you hit 600 km/h, so its a good idea to cut throttle at the final part of your dive slowing your acceleration down by a bit. Also when trying to lead an enemy plane that is making a hard break turn, try to prevent making high G turns or turns that burn a lot of speed, this mostly happens when you dive in at a shallow angle, as it kills all the speed you have, forcing you to engage in a dogfight, where the turn rate offers an advantage to the enemy. While it's doable, it's generally better to run, by going into a shallow dive and retreating. Alternatively, engage in a shallow climb, the rate of climb is one of the best at its tier, meaning that if you have a small speed advantage you can get some separation and climb away.

The guns make it unsuited to effectively engage bombers, especially the well defended bombers such as the B-25 and the A-20. It's better to team up with your teammates than try to attack them on your own. It is best to aim for the engines and wings, basically engaging them the same way as you would engage fighters. Furthermore, the Folgore can't carry any bombs, so its useless in ground attack role.

For belts use "Tracers", "Air Targets" or "Stealth" as they deal the most damage, with a good mix of incendiary and shrapnel. With the Breda-SAFATs, focus on taking out the engines.

In late 1941 the newer and deadlier Macchi M.C. 202 Folgore (Thunderbolt) began to equip units of 7° Gruppo, and in early 1942 Visconti began flying the sleek, new fighter on photo reconnaissance sorties over Malta. Throughout these early years of the war, a near constant trickle of supplies was required to keep the strategically vital island of Malta alive and in allied hands: mid-June 1942 saw two of these convoys simultaneously attempt to resupply the island from different directions. Operation Harpoon – a convoy from Gibraltar – was coordinated with Operation Vigorous from Alexandria. Both convoys were opposed by axis forces and on June 15th, in the air battle above Operation Harpoon which would become known as the Battle of Pantelleria, Visconti shot down a Bristol Blenheim. On August 13th, whilst on a two aircraft reconnaissance sortie, Visconti and his wingman were jumped by four RAF Spitfires. Visconti engaged and shot down two Spitfires, allowing the second M.C. 202 to complete the sortie. He was awarded another Medaglie d'Argento for his skill and courage.

Visconti served in Greece before being promoted to Capitano and taking command of 76a Squadriglia as 54° Stormo was deployed in Tunisia in March 1943. In the brief weeks of fighting which led up to the axis surrender in May, Visconti was credited with two Spitfires and a P-40, as well as several other probable victories. Sharing a cramped cockpit with a fellow pilot, Visconti escaped the allied advance by flying to Sicily. Given his wealth of experience carrying out high speed, daylight reconnaissance flights over Malta, Visconti was given command of 310a Squadriglia Caccia Aerofotografica, a newly formed reconnaissance squadron equipped with modified Macchi C. 205 Veltros (Greyhounds) which were based east of Rome.[1]