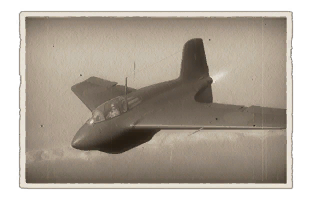 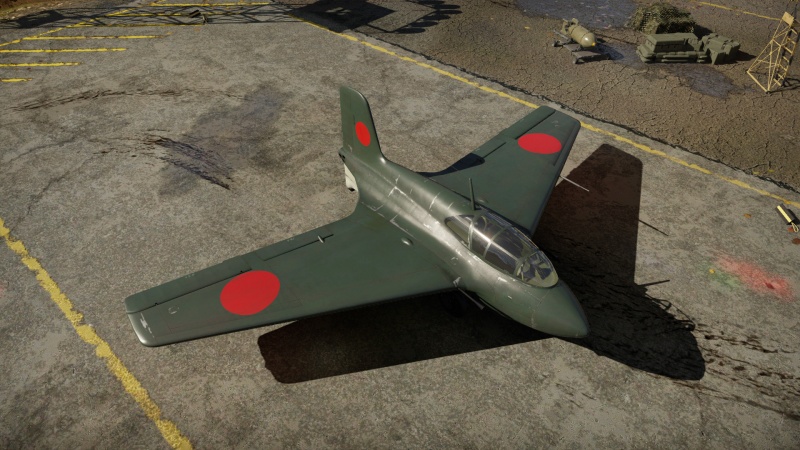 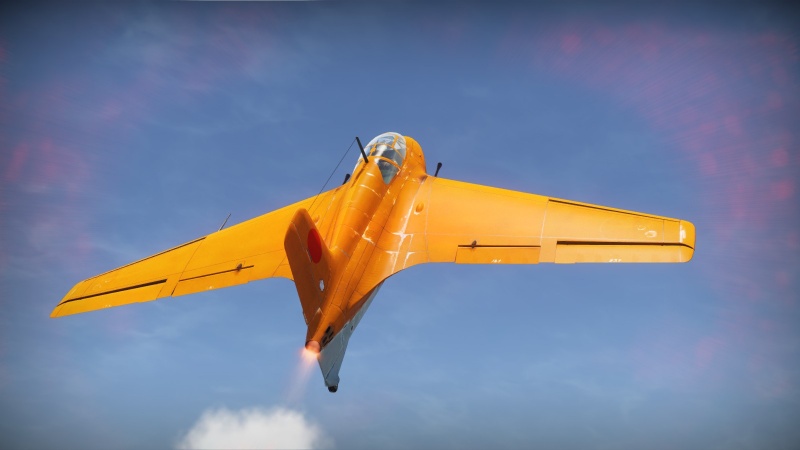 As the Ki-200 Shusui is a small and nimble rocket-propelled aircraft with powerful armament, it mainly sees tier V and on occasion tier VI jets. It isn't uncommon to start seeing AAMs here but as a rocket, it has an almost unprecedented advantage over all of these aircraft. The Ki-200 has an astounding climb rate rivalling that of the MiG-15. Due to this, the pilot can choose when and where to engage enemy aircraft. Having this is the most important advantage one can have flying the Ki-200. Once this ability is lost, chances of survival are minimal. This occurs mainly when the plane is almost out of its limited fuel and/or ammunition which forces the pilot to land.

Another huge advantage the Ki-200 has over jet aircraft is the ability to turn. The Shusui can virtually turn on a dime, allowing the rocket to even outturn propeller aircraft. However, at the highest speeds and pulling more than 8 G, the wings will snap, resulting in a crash. The ideal time to turn is around 600 km/h. At this speed, enemy pilots will have a horrible time attempting to dogfight the Ki-200 as it will easily outturn them and fireball them to the ground if precautions aren't taken.

The Ki-200's armament consists of 2 x Type-5 30 mm cannons though only loaded with 120 rounds of ammunition, so accuracy is key. For this, it is not recommended to attempt making deflection shots. It is easy enough to get up close with an enemy and destroy it with less than 20 rounds. That being said it is strongly ill-advised to attempt to shoot at long-range with the cannons wasting shells on a very slight chance of hitting. Only when a target isn't catchable but flying in a very straight & predictable path, it wouldn't hurt attempting a shot or 2. Usually, it is not difficult to hit those shots, but it can become aggravating due to the cannons jerking left and right from recoil when firing shots close after each other.

Taking off and Managing fuel 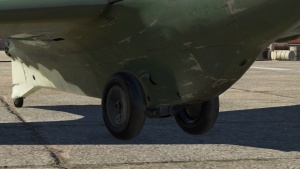 The Ki-200 is fitted with disposable gear just like the Me-163 when taking off from an airfield, it will automatically drop to the ground once the wheels no longer touch the runway. When taking off in RB/SB, the speed at which the plane starts to leave the ground is at 230 km/h (140 mph) with fully extended flaps and 300 km/h (185 mph) with the flaps fully retracted.

Managing fuel consumption is very important since the fuel burns out after 5 minutes at full throttle. The lifetime of the fuel tank increases by more than 15 times below 30% throttle while still maintaining airworthy speed. It is strongly advised to keep throttle low when loitering at high altitude or returning to base with few seconds of fuel left. It is possible to still get back to base with just 10 seconds of fuel and descend speed at 20% throttle, which will last around 3 minutes longer. Generally, it is advised to zoom climb up to altitude and build up whatever speed possible before the fuel indicator hits 3:30. At that point, throttle back to 50% and hunt for an enemy. In a dogfight, use full throttle, but if it's not possible to catch someone or the fight will be over their airfield, pull off, climb, and idle until another opportunity presents itself.

Setting the throttle to 0% is very likely to cause fuel starvation and shut down the engine, making the aircraft decelerate faster, increasing the throttle by at least 1%, and it will turn right back on.

To completely master the Ki-200, it is vital to learn how to manoeuvre and land effectively. It is strongly discouraged for vertical manoeuvres in the Ki-200. Even at speeds under 720 km/h (450 mph), it becomes very easy to rip the wings in vertical dives. That being said, do not try to nose up after any vertical manoeuvre quickly. On the other hand, turning horizontal with the Ki-200 is very beneficial as to be expected from a Mitsubishi plane. The Ki-200 is a blend between the turn power of a Zero, the firepower of a MiG-15, and the speed of a Sabre

To land with the Ki-200, approaching the runway at lower speeds is a necessity. The Ki-200 has gear and landing flaps but it's only recommended to use the gear for losing airspeed coming into the landing. If the plane hits the runway too hard with the gear down, the plane goes into an up and down motion skipping over the runway. It's because of this that it is essential to bleed as much speed as possible when nearing the airfield, either by making hard manoeuvres at low speed before landing, levelling out the plane once nearing the ground and using flaps, gear and ailerons to fight and keep the plane level on a ski. Once reaching a stop, let loose of the ailerons and let a wing gently touch the ground.

When American Boeing B-29 Superfortresses began to raid the islands of the Empire on a mass scale, the need to create a high-speed, fast-climbing, powerfully armed interceptor became ever more pressing for the Japanese aircraft industry. The Japanese, however, completely lacked experience in creating aircraft of such a class, and some initial work in this field had no effect on the bombing's intensity since the interceptors available to the Army and the Navy were inadequate.

As usual, help came from Germany. In the autumn of 1943, at Oldenburg Air Base proving ground, Japanese military attachés were presented with a new miracle weapon, the Messerschmitt Me.163 Komet rocket-powered fighter. Its capabilities greatly impressed the Japanese. After brief negotiations, a license to produce the aircraft was purchased for 20 million Reichsmarks. As early as April 1944, a package of documents was dispatched on two Japanese submarines bound for Singapore. Some things were shipped together with the documents, such as a functional Walter HWK 109-509 rocket engine, an airframe, several production assemblies, and equipment components. Things did not turn out too well: one of the submarines was lost on the way after being spotted by the Allies. However, the main body of the documents was able to reach the 1st Naval Air Technical Arsenal in Yokosuka.

Unfortunately, the Japanese industry was not ready to manufacture a product of such advanced technology. Changes still had to be made, although it had been decided to stick to the documents received from the Germans as closely as possible. The main reason for the difficulties was the poor strength standards the Japanese had for the materials used. The Japanese metallurgical industry could not provide the high-strength alloy steels to manufacture the engine injectors, and the chemical industry could not provide the required amount of hydrogen peroxide as an oxidizer and hydrazine hydrate a fuel. The development of the interceptor, which Mitsubishi specialists delved into as early as late June of 1944, was significantly drawn out. It was necessary, first of all, to modify the design to match the overall technological level of development of the Japanese aircraft industry.

In addition to technological problems, the designers were faced with purely technical difficulties. They needed to install some powerful armament, such as two 30mm Type 5 cannons that were larger in size than their German counterparts, the Rheinmetall-Borsig MK 108 cannons. In addition, the Walter HWK 109-509 engine produced by Mitsubishi under the designation Toko Ro.2 or KR10 was extremely accident-prone and thus dangerous. The engines regularly exploded during trial starts, killing one engineer after another. It should be noted that military specialists from both the Navy and the Army took an interest in the interceptor simultaneously, but, despite the competition, the development was a joint venture. The Navy designated the project as the J8M1, whereas the Army's specialists designated it as the Ki-200, and the aircraft had a common name: the Shusui (Swinging Sword). Nevertheless, it was the engine-related problems that made the developers divide again into Army and Navy. As a result, the Army's specialists managed to assure the engine's stable operation for 4 minutes, while the Navy's engineers achieved nothing more than 3 minutes.

On July 7, 1945, the test pilot Toyohiko Inuzuka flew the J8M1 interceptor for the first time. After the aircraft reached a height of 380 m, the engine stopped abruptly; the pilot managed to level the plane out and head back on a return course, but the situation could not be saved: the machine nosed over and was completely destroyed; the pilot died the next day from injuries sustained in the fall. Several more engine-related accidents resulted in the designers having only one KR10 left, but they failed to install it on any of the four finished J8M1 airframes because the war ended and the project with it. By this time, the factory in Okha had 6 more airframes in different stages of preparation, 6 finished engines, and 20 more on the production line. Thus, the Japanese never managed to improve the aircraft to any flyable condition.