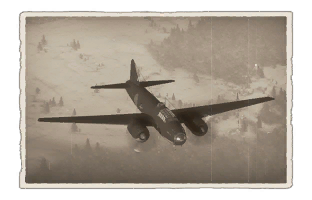 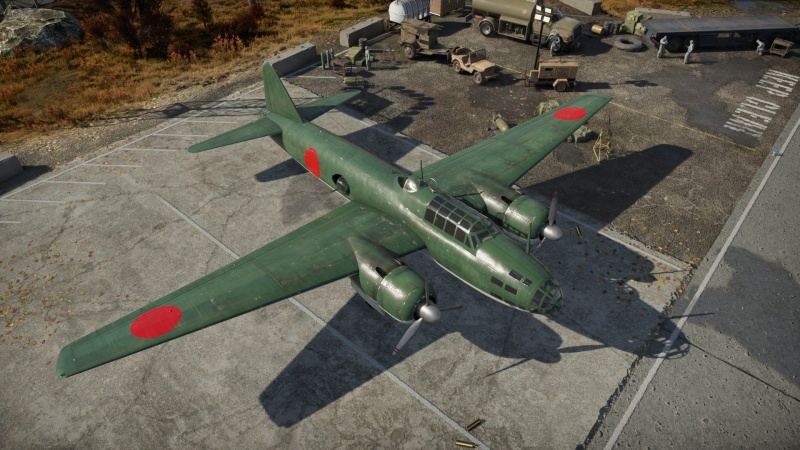 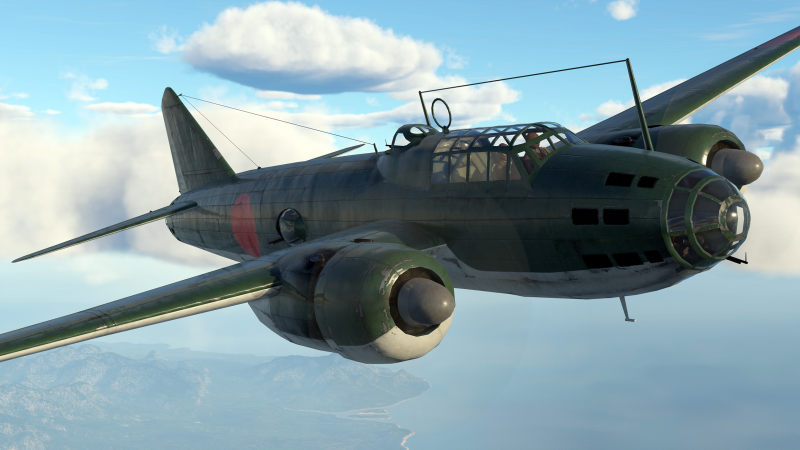 The G4M1 is a rank II Japanese bomber with a battle rating of 3.0 (AB/SB) and 2.7 (RB). It has been in the game since the start of the Open Beta Test prior to Update 1.27. The Americans nicknamed it "Betty", whilst the Japanese called it "Hamaki" ("cigar" or "leaf roll").

This vehicle is more dangerous the longer it stays in the battle- this is because, whilst its armament of 4 x 250 kg bombs is a small one for its BR and rank, it can destroy most targets that it will encounter with these bombs, so more bombing runs make it more devastating to the enemy ticket counter. This plane can be used as a base bomber, but this normally results in death, as the enemy climbs to meet you and it only takes a few shots to destroy you. The G4M1's most effective play is destroying ground targets like Light Pillboxes, tanks and gun emplacements; the 250 kg bombs work on ships well too. It is not suggested to climb in the G4M1, as you need the protection of air superiority to be secure higher up, but the Allied aircraft you face will engage your fighters before they reach you.

Accuracy is everything with the G4M1. You need to be on target with your rear gunner, otherwise an enemy sitting behind you will make quick work of you. The 20 mm cannon is devastating if you hit- this can be hard for novice bomber pilots, but expert bomber pilots will know where to aim. The other guns on the G4M1 have little effect, but try to use them if the enemy is closing in in that direction.

The bomber has no dedicated armour protection, however, it still features relatively good survivability for a Japanese bomber. All of its fuel tanks are self-sealing, making it likely to survive burning wings, and significantly increasing survival chances under low to medium-calibre gunfire. Furthermore, the 20 mm rear cannon provides an opportunity to quickly dispatch tailing fighters. This, in a combination with a narrow silhouette, makes rear aspect engagement the preferable way of dealing with incoming enemy fighters.

What should be avoided are enemies incoming from top and bottom, especially those equipped with 20 mm cannons, as the large and fragile wing area makes for an easy target.

This plane needs to be fast to avoid trouble and good at defending itself- stock, it can do both things, but not very well. It is suggested that you research Engine and flight performance modifications as quickly as possible so you can skirt around the edge of the map, away from fighters. Alternatively, if you believe you can handle fighters, research the defensive armament lines first. Bomb load-outs are the next most important thing- fortunately, since research at this rank costs very little time, you can research defensive armament and bomb load-outs alternately; this will make the G4M1 an effective weapon. Protection is non-existent for the G4M1, so you should research survivability upgrades last, as it will not help you survive fighter attacks.

The G4M1 can be outfitted with the following ordnance:

The G4M1 is defended by:

Comparing to its contemporaries, the G4M1 has a somewhat above average climb rate and top speed. Where it has an advantage is in the defensive armament, which, however, cannot be completely relied upon, due to the unreliability of the AI gunners and the relative fragility of the medium bombers.

As a result, the best use of the G4M1 is in dropping general-purpose bombs on enemy bases and emplacements from a high altitude, in particular for the arcade battles. Here an extra care should be taken when selecting bomb load, in order to choose payloads with maximum TNT equivalent for its destructive potential, as opposite to armour-piercing bombs. Also, worth noting, that the 800 kg Number 80 Model 1 bomb does more damage to the enemy base than the four 250 kg Number 25 Model 2 bombs, despite them having a higher total TNT equivalent. 250 kg bombs, however, are perfect for engaging enemy pillboxes and vehicles, owning it to their 116 m destruction radius of a soft targets, and 5 m of the armoured targets.

For the anti-naval duty, the B6N family or D4Y family typically do a better job, in particular as a torpedo carrier, due to its smaller size and vastly superior maneuverability.

Low-altitude attacks against vehicles would be best left to the D4Y3 Ko, within the same BR it carried triple 250 kg bombs (1 less), but it's far more manoeuvrable and to a limited degree can double as a fighter with its twin 7.7 mm machine guns.

Designed as a lightweight medium bomber, the G4M1 sacrificed protection in order to achieve high-speed and an operational range of 2,850 km. Unfortunately, this made the plane extremely vulnerable to Allied fighters and anti-aircraft fire who found the engines and fuel tanks particularly flammable. The plane's finest hour was the sinking of the HMS Repulse and HMS Prince Of Wales, the first two capital ships sunk in open waters by aircraft during wartime.

The plane also played a role in the final hours of Admiral Isoroku Yamamoto. Two G4M1 bombers of the Kōkūtai 705, escorted by 6 A6M2 fighters Kōkūtai 204, were to carry him from Rabaul to Balalae Airfield near Bougainville Island. Admiral Yamamoto's purpose in traveling to Balalae Airfield was to inspect Japanese aircraft participating in Operation I-Go, and to boost morale following the intense battles at Guadalcanal. However, U.S. naval intelligence decrypted orders sent to Japanese commanders regarding the itinerary, escorting forces, and which units were be toured. In Operation Vengeance, 18 P-38G Lightnings were sent to intercept Yamamoto, which ended in both G4M1 bombers shot down. The bomber with Yamamoto crashed in the jungle, killing him, and the other, holding his staff, crashed at the sea.