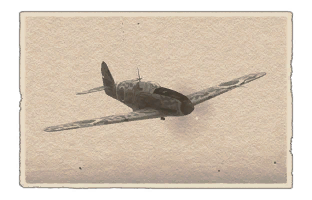 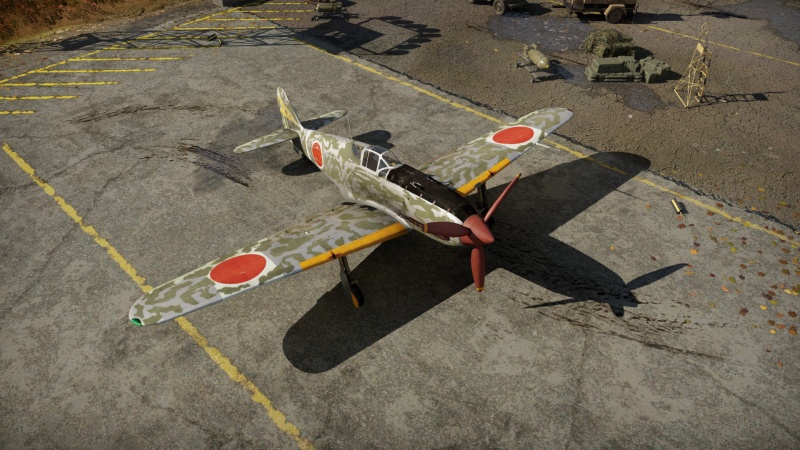 While Japan is famous for turn-fighters like the Zero, the Ki-61 Hien will make "boom and zoom" pilots feel at home. Possessing good high altitude performance, good climb rate and good diving capabilities, this "energy fighter" flies much like the Bf-109 which inspired its design... though the Japanese traded quite a bit of firepower in favour of manoeuvrability. This allows the Hien pilot to choose what role he or she wants to play in the battle. One could play the reserved, high flying energy fighter, or if the situation dictates, the aggressive low flying dogfighter (against certain opponents). Compared to the "Zero" it is faster, has a higher climb rate, and handles better at higher speeds... but is no match in overall manoeuvrability.

The Ki-61-I ko has a rather weak armament and lacks flexibility, as it is unable to equip bombs or ground targets belts. The Ki-61-I ko utilises two 12.7 mm Ho-103 machine guns and two 7.7 mm Type 89 machine guns. Generally, both are unreliable and it often takes hundreds of rounds to destroy an enemy plane. This is due to the lack of primer in the rounds themselves. 12.7 mm rounds fired by the M2 Browning may seem to do more damage because they have more primer which dictates how fast the round will exit the barrel. Due to this, it is necessary to get up close to enemies. Aim for the engine, pilot, or fuel tanks if the location is known. Remember to lead with these machine guns, as the rounds are not high velocity. The 7.7 mm rounds will hardly damage any plane with armour, so the Hien relies on its 12.7 mm guns which are fairly lacklustre.

The low muzzle velocity of both weapons means that pilots may have to close to short range in order to hit and deal significant damage to targets. Even so, it will require some time to critically damage tougher aircraft such as bombers or attackers. However, with accuracy and shot placement, the large ammunition pool can work to your advantage.

The Hien also comes equipped with an armoured plate at the pilot seat as well as rudimentary self-sealing fuel tanks.

Unlocking the performance modules should be a Hien pilot's first concern. The stock machine gun belts aren't very good in a general sense, but neither are the others. The "New 12.7 mm MGs" can be helpful as it allows for longer periods of firing. Unlocking the 7.7 mm belts can also be beneficial because you can equip belts with more armour piercing rounds.

The Ki-61 Hien is best utilised as a multi-purpose fighter. Although proficient at energy fighting, the Ki-61 is also generally good at standard manoeuvres. It may lose turn fights with some enemy aircraft like the Spitfire Mk IIB, but nonetheless it can still be used in multiple roles. The Ki-61 is your standard "jack of all trades". It's not incredibly good at anything it does but it is even across the board. This allows the Hien pilot to choose what role they want to play in the battle. One could play the reserved, high flying energy fighter, or the aggressive low flying dog-fighter. The Ki-61 allows these choices.

One of the major advantages the Ki-61-I ko has is its climb rate. The stat card may be misleading, but this plane can reach altitudes beyond that of most of its opponents. This allows the Hien to choose when and where it wants to fight. Once at a high altitude, the Hien pilot may choose to dive lower to attack an enemy. If the enemy is not destroyed on the first pass, it is recommended to climb sharply and gain altitude. By doing this, the Hien sets itself up for another attack while not being in the range of the enemy's guns.

The Ki-61 was first put into service in with a special training unit, the 23rd Chutai, and entered combat for first time in early 1943, during the New Guinea campaign. The Hiens were sent into a difficult theatre where jungles and adverse weather conditions coupled with a lack of spare parts quickly made short work of the Japanese fighters. Nonetheless, the Hien proved to be a worthy adversary and it even outclassed the P-40. Towards the end of the war, Ki-61s were relied upon heavily to defend the Japanese mainland from B-29 attacks. Some pilots used ramming attacks to down the Superfortresses. Soon, entire "special attack squadrons" were formed for the sole purpose of downing B-29s via the ramming method.

To strengthen armament in the Ki-61-I, instead wing-mounted machine guns of the previous models Ki-61-1-Ko and -Otsu was established by German's 20-mm cannons MG 151/20, which in the amount of 800 units in August 1943 were taken to Japan by submarines.