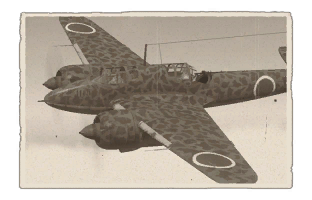 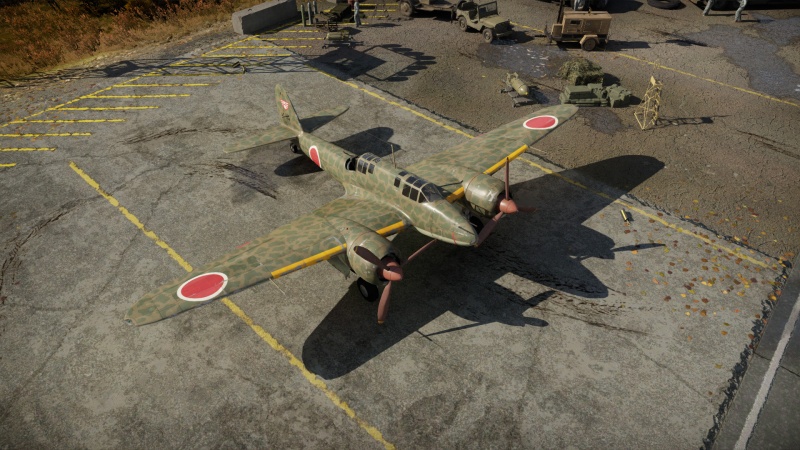 Instead of focusing on armament like other heavy fighters, the Ki-45 is more balanced between armament and flight performance. While the default ammunition belts for both weapons on the Ki-45 ko are workable, it can help to upgrade. Unlocking the flight performance modules will help drastically in dogfights and turn fights.

The Ki-45 otsu is defended by:

This variant of the Ki-45, the Ki-45 otsu, features the first "hard-hitting" armament of the series. Wielding two Ho-103 12.7 mm guns and one 37 mm Type 94 cannon, the Ki-45 otsu is the pinnacle of a multi-purpose aircraft. Its 37 mm cannon allows it to take down bombers with ease, and its nose-mounted 12.7 mm guns allows for some flexibility in the dog-fighting department. Although deadly, the 37 mm cannon only holds 16 rounds, so shot placement is crucial. The round itself also travels fairly slowly in the air, making it hard to hit fast moving enemy fighters. The 12.7 mm guns is best used in an anti-fighter role. Fortunately, the Ki-45 otsu can also be used in an anti-tank role, thanks to the AP rounds for the 37 mm cannon (42 mm penetration), which can take out light and medium tanks, light pillboxes, and even a few player controlled tanks. The Ki-45 is unable to equip bombs.

The Ki-45 otsu also retains its impressive turn rate from the Ki-45 ko. Although the aircraft itself is large and presents an "easy target" in many players' minds, the Ki-45 is rather nimble. Use this to your advantage when engaging enemy aircraft. Unfortunately, the Ki-45 is a heavy fighter, meaning its turn time is still not on par with other aircraft such as the F2A-3. In certain cases, the Ki-45 pilot may have to rely on his or her tail gunner to get the job done. The "otsu" version of the Ki-45 features a 7.92 mm Type 98 machine gun with 1,050 rounds. Although lacklustre, with shot placement it is possible to destroy enemies on the aircraft's tail. Aim for the pilot or the engine, as those are generally the weakest points on most aircraft. If the tailing enemy is a bi-plane, aim for the wings since they are very fragile.

The Toryu is also rather fragile for a heavy fighter. Although it does feature two engines, the Ki-45 does not have very much armour protection. Only the back of the pilot's seat has armour, leaving both the gunner and engines unprotected. This can prove costly in a fight. If one does find him or herself tailed, call upon teammates for assistance.

Initially designed to be a bomber escort, the Ki-45 was first deployed in what is now China and Vietnam. It was found to be easily outclassed by P-40s piloted by the Flying Tigers. As a result, the Ki-45's role was changed to anti-shipping and ground attack, where it performed satisfactorily. Nonetheless, the Ki-45's greatest strength proved to be its bomber intercepting capabilities. Heavily armed with 37 mm cannon, the Toryu (Dragon Slayer) could destroy heavy bombers with ease. As the war progressed, the need for an interceptor to defend the Japanese mainland was ever present. Soon, the Ki-45 was deployed to counter B-29 Superfortress raids. Although its armament was clearly deadly enough, the Ki-45 suffered at high altitudes. Pilots soon resorted to ramming attacks against the Superfortresses. Special attack groups specifically designed for this purpose formed, but by late 1945 Imperial Japan's fate had been sealed. The Allies allocated the name "Nick" to the Ki-45.

Combat experience showed that the Toryu was particularly good as a ground-attack aircraft for striking ground and surface targets. In order to improve the effective use of the Ki-45 for anti-ship and ground attack tasks, the special Ki-45 KAI Otsu version was launched into full-scale production.

Aircraft of this version were equipped with new Mitsubishi Ha-102 fourteen-cylinder, radial air-cooled engines producing a takeoff power of 1,080 hp. These engines were housed in nacelles which had a smaller diameter when compared to previous versions. The aircraft's flight characteristics remained unchanged, since the increased engine power was accompanied by a larger takeoff weight; however, the improved reliability of the Ha-102 engines was appreciated by flying and maintenance personnel.

The aircraft's armament was drastically reinforced. The nose-mounted 12.7 mm machine guns were replaced by one 20 mm Ho-3 cannon with 50 rounds. The ventral nacelle housed a 37 mm Type 94 manually loaded cannon with 16 rounds. The 7.92 mm Type 98 machine gun with 1,050 rounds remained in the rear defensive turret.

The installation of the new front armament meant changing the shape of the nose fairing, and additional access doors were cut in the skin. The landing headlight was moved from the nose section to the left wing leading edge.