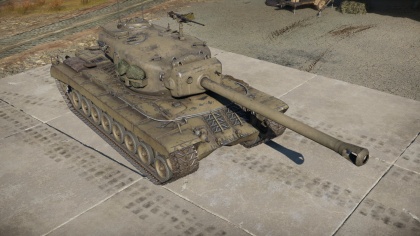 The Heavy Tank T30 is a premium gift rank IV American heavy tank with a battle rating of 6.7 (AB/RB/SB). It was introduced in Update 1.85 "Supersonic" in the 2018 "Festive Quest" that took place between 21 December 2018 to 14 January 2019. It was obtainable via completing 10 Christmas Toys for tankers. It could also be purchased on the Gaijin market after the event was over.

The T30's mobility is good for the role it fulfills. Its acceleration and maximum speed are good for a heavy tank. While the reverse speed is average, it isn't a handicap. And the T30 can brake quickly in spite of its weight. Neutral steering allows you to turn your hull towards flanking enemies relatively quickly on the spot. The offroad mobility is good: the T30 can reach 15 km/h when climbing uphill from idling and 21 km/h when fording. Due to its weight, the tank's mobility is unhindered by obstacles. 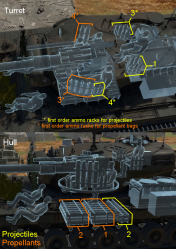 Ammo racks of the T30

Despite its labeling as a heavy tank, the T30 is better used as a tank destroyer and being more of a supportive role than a breakthrough role that most heavy tanks were designed to do. With its long reload for the 155mm makes it's gameplay a bit similar to tank like KV-2 than tank like T29 or T34. The T30 can handle itself on its own if in a one on one encounter but will be at a disadvantage if it is facing more than one due to the long reload time. So to fully utilize that heavy gun it might be best to be a supportive role tank for the medium tanks or the MBTs that got a faster reload but not the same destructive power as the T30's 155mm have.

The T30 share similarities with the armour as the T29 and T34, having a thick heavily armored turret got it's advantages. Since it's most heavily armoured part is the front turret it can be a key factor on how to make plans where to best utilize the tank, keep in mind even if having the turret only exposed it's not a 100% guaranteed safety from shells like APDS that will with ease be able to penetrate turret. But shells like HEAT-FS will mostly not do same amount of damage but can take out the gunner or in worst case scenario the gun's breech.

Enemy tanks to be aware of is mostly MBTs like Leopard 1, M60, Vickers MBT, T-54 (1951), STB-1, OF-40, Strv 101. But that is not the only threat there is also ATGM Vehicles and large caliber tanks that can have enough Power to disable the T30's turret when hull down and out flank the slow T30's position.

The armament of the T30, a 155 mm T7 L/40 gun, was one of the largest guns ever fitted to an armored fighting vehicle made in the United States. The gun was carried in a tall, long turret with rounded edges. The height of the turret was quite necessary, as the size of the gun and its ammunition required a standing loader. The hull of the T30 was the same as the T29. It was a lengthened version of the T26E3 chassis. The armor of the T30 was quite thick, and the hull was also well angled, as one of the requirements for the design was protection from the German long 88 mm anti-tank gun. The T30 carried a crew of six men. These were the driver, commander, bow machine gunner, gunner, and two loaders. One loader moved the crane that placed the shell, and the other used the rammer that put the shell into the breech. The gun could only be loaded at certain angles. The T30 saw an upgrade, called the T30E1, which added an automatic loading system, which moved the gun to the correct position, loaded the shell, and moved the gun back to the firing position. A hatch was added to the rear of the turret to allow the ejection of shell casings after firing.