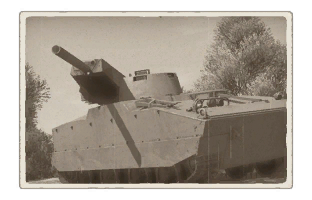 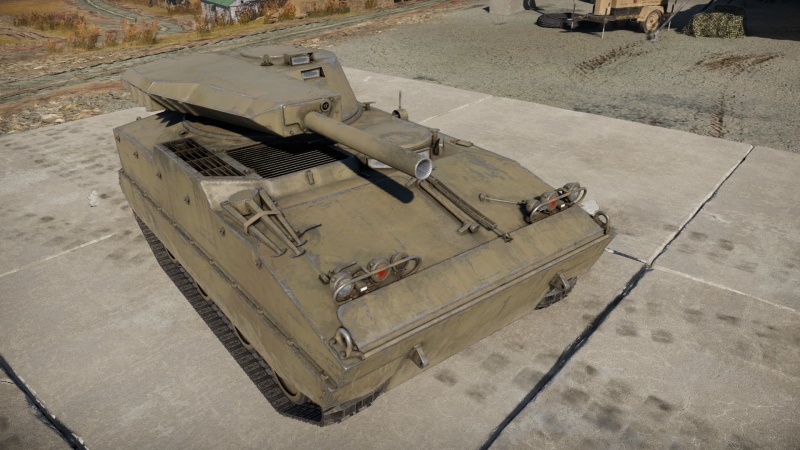 The gun packs a great punch with up to twenty six rounds with 433 mm of penetration from its High Explosive, Anti-Tank, grenades ("HEAT") round, allowing the T114 to take on a wide variety of formidable foes. Considering that the velocity of the projectile is not very fast, it will have to use it almost like a mortar at ranges over 800 metres (2,624 feet). Use the terrain and vegetation on the map to get close then engage the enemy in an ambush. The T114 will be able to one-shot most tanks if clever with shot placement since it is only equipped with "HEAT". The T114 has a three round magazine for the 106 mm gun, so if the first shot fail to hit, another two can be shot off within few seconds. However, the reload of the magazine will depend heavily on the crew skills . 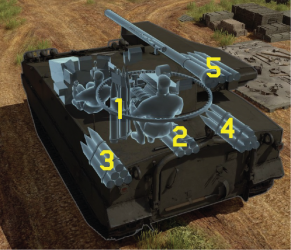 Once the eight clips have been used, pivot turn and run as fast as this tank can go and head to the cap zone to reload. However, use cover in the cap zone. The armour is only up to 44 mm thick in the thicket place (front). Make sure the tank is not exposed to any unnecessary risks or confrontations with the enemy forces. Watch out for enemy units which may be trying to flank from the rear and/or sides to take cap zone.

In the early 1950s, the US Army started work on developing a new generation of lightly armoured vehicles, such as APCs. General Motor's Cadillac division proposed two versions of their T114 armoured vehicle to support infantry and anti-tank battalions, respectively. One version would to be armed with a single high calibre machine gun in a full rotatable turret, which would support the infantry battalions, whilst the other would be equipped with a 106mm recoilless gun, serving among the ranks of anti-tank battalions. In 1960, six prototypes of the T114 were built; four armed with machine guns and two armed with the recoilless gun, the latter being named BAT (Battalion Anti-tank) for a short period of time.