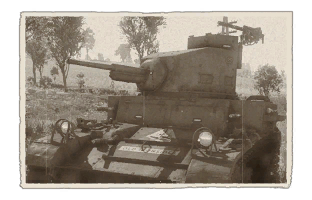 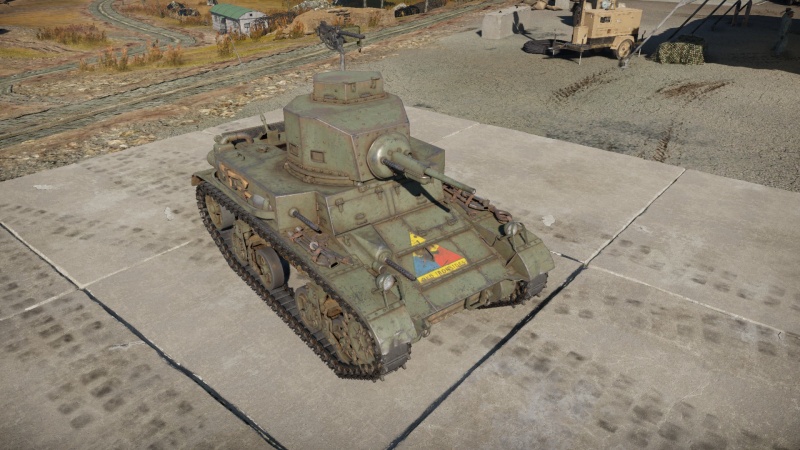 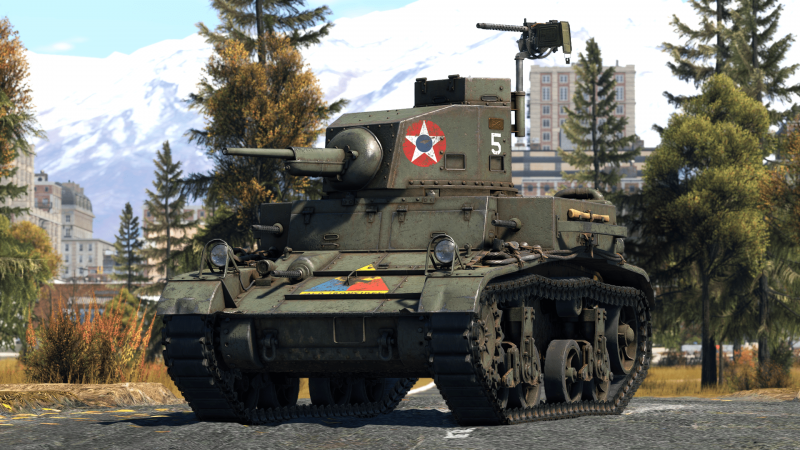 The Light Tank M2A4 (1st Arm.Div.) is a premium rank I American light tank with a battle rating of 1.0 (AB/RB/SB). It was introduced in Update 1.45 "Steel Generals" and was awarded to players during the 2014 "Winter Holiday Specials" mini-event.

The overall mobility is decent. The top speed is great, easily getting to around 50 km/h on solid roads which is faster than most of the reserve tanks like the Pz.II or the T-26. However, wheeled vehicles like the Sd.Kfz. 140/1 can easily outrun the M2A4 on road. On softer roads like grassland and sand, it remains around 30 km/h which is still quite fast.

The reverse speed is only adequate to dodge shots from a distance. Do not expect to quickly reverse back to cover like a Sd.Kfz.234.

The overall firepower is decent at its BR. The main cannon has an adequate penetration of about 60 mm which is more than enough to go through most tanks below BR 2.0, for example, T-26, Pz.III and Pz.35(t). Although the available ammunition is all solid shells, they still make quite a bit shrapnel when penetrated which is enough to knock out compact tanks like T-26 and Pz.35(t) with a single shot. For larger tanks like the LVT(A), accurate shots pinpointing the crew are required which might be a little hard for new players. The cannon has enough accuracy to precisely knock out the enemy's crew within 500 m. If one shot misses, the reload time of around 3.5 seconds allows quick following shots.

There is a nice stabiliser for the cannon which is a big advantage when exchanging fire, as it allows you to move out of cover and fire (usually before the enemy) without having to wait for your tank to stop wobbling. The stabiliser should be utilised to maximise your chance of surviving and taking out enemy tanks. Note that it only works below 10 km/h, so remember to slow down or it will not stabilise the gun.

Targets like the 15cm sIG 33 B Sfl or M3 GMC (in mixed ground battles) can be quite hard to destroy, as their armour is thin enough to create little shrapnel, but are also thick enough to stop MG bullets. Against them, you can only rely on you fire rate, accuracy and of course your knowledge of their crew position to knock out their crew one by one. Always go for the gunners or drivers first, if you failed then they can always fight back and knock your tank out with a single shot.

The main cannon is only effective in close quarter combat (usually within 200 m) or against weakly-armoured targets, since the penetration drops drastically as the range increases, plus the small calibre makes the shells easy to ricochet. When encountering fairly well armoured tanks like the M13/40 or H.35, try and break their gun barrels first or track them. If they are too far away, pin them on the map and call teammates to help. 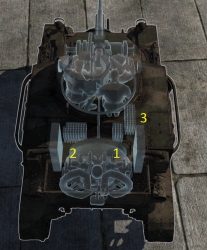 The machine gun is only enough to destroy poorly protected vehicles such as the AS 42, Flakpanzer I, GAZ-AAA (4M), and GAZ-AAA (DShK). The penetration of around 10 mm is not enough to go through the frontal armour of those not-so-weakly-armoured tanks like the SU-5-1, Panzerjäger I or 15cm sIG 33 B Sfl. If you are skilled, the two MG can effectively damage low-flying biplanes.

The fixed MG in the hull are useless most of the times, as they have absolutely no traverse. It is very hard to point the hull directly at a target given the poor hull traverse of the M2A4.

Its gun has better accuracy than the majority of tanks on its rank, and its APC ammo retains its penetration at most ranges. This ability to hit rapidly from range and still penetrate in part makes up for the somewhat anaemic damage of the 37 mm gun.

Like all tanks of this rank, it is lightly-armoured and can be damaged or knocked out by any other vehicle from almost anywhere on the map. A useful tactic is to make use of its speed by engaging at range and then relocating when enemy presence gets too heavy around you.

Specific enemy vehicles that bear mentioning are firstly any Germans with the 20 mm KwK/FlaK38 cannon, this gun might be small but can have up to 64 mm of penetration, which is enough to go through the M2A4 almost anywhere. These guns can also fire 10 rounds at 280 rounds/min before having to reload the clip, meaning that they will very easily take out your crew before you have a chance to respond. To counter, the best chance you have is to angle your frontal armour which can make it difficult for the PzGr 40 rounds to penetrate. The Soviet T-50 and T-126 are vehicles you will also see commonly, these have fairly thick and angled frontal armour that will prevent you from easily getting through. These tanks can also carry an APHEBC round that will destroy you in one shot with little difficulty, so to counter you should use your speed to attempt to get a side shot into either the turret or engine. If the T-50 cannot move you can outrun its turret and finish it without much difficulty.