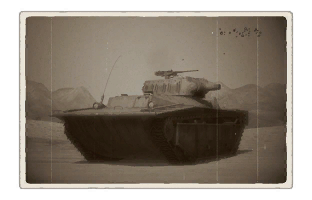 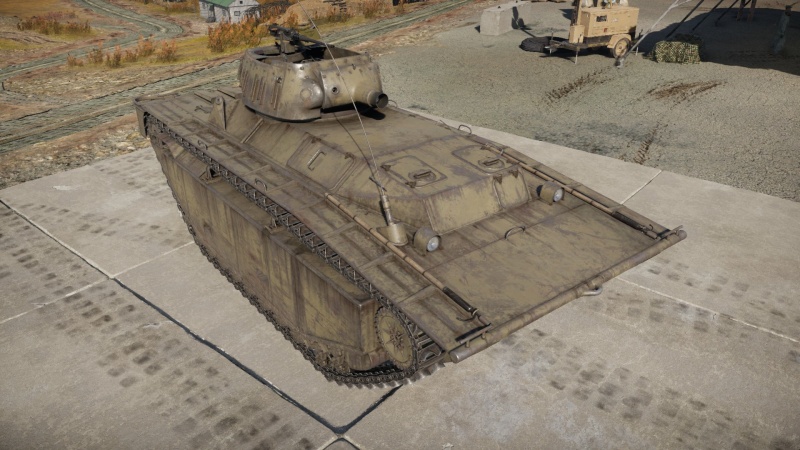 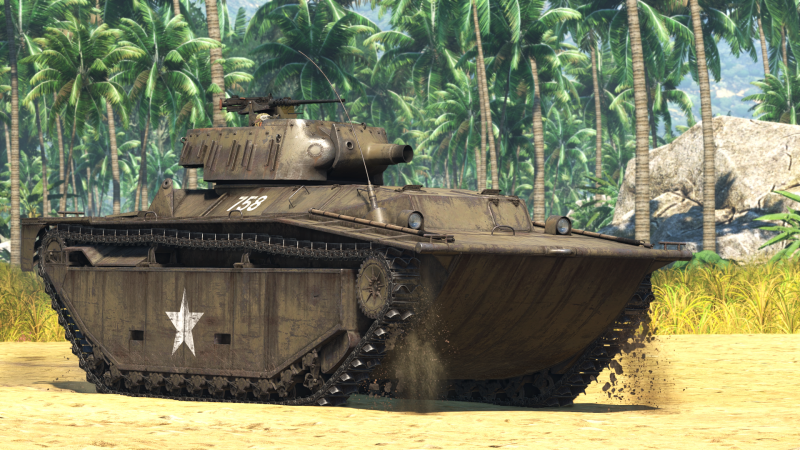 The LVT(A)(4) (ZiS-2) is a premium gift rank I American light tank with a battle rating of 1.3 (AB/RB/SB). It was introduced during Update 1.97 "Viking Fury" as a reward for the Victory Day event.

Like its reserve rank brother, the LVT(A)(4) is a big tank with lots of space between modules and crew. This allows some surprising survivability when facing tanks that have low-calibre single shot guns, and even some automatic cannons such as the ones equipped on the Panzer II's. The LVT(A)(4)'s biggest adversary is HE or HEAT ammunition, such as the kind fired from the Chi Ha's 57 mm and Panzer IV's 75 mm. The LVT(A)(4)'s hull armour is very thin, and is only effective against rifle-calibre machine guns. The turret armour is a different story. With decent angles and relatively good thickness the turret can cause a fair amount of shots to ricochet or bounce. The turret is open-topped however, and is vulnerable to artillery and air attacks. 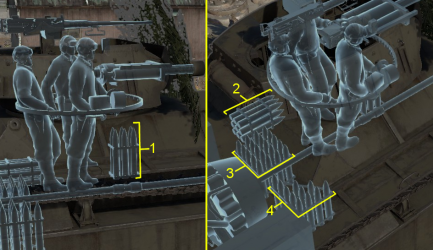 The LVT(A)(4) is a fantastic fighting vehicle, it has a powerful 75 mm cannon attached to an LVT chassis is a great platform to fire on and giving its high profile, it is well built to fire over walls and other impediments. It is easy to hide the hull on some maps, like Abandoned Factory or Poland. One of the biggest issues, however, is that the vehicle is very easy to destroy with overpressure, so be very wary of vehicles firing powerful HE or HEAT shells such as the Spj fm/43-44 or the Sturmpanzer II, because if they get a shot off on your tank it will be destroyed. However, with the .50 cal machine gun, if enemies miss or do not destroy your vehicle, you can fire off a few bursts and destroy their vehicles.

The first version of the LVT, the LVT-1, could carry 18 men or 4,500 pounds of equipment. The Marines first used the LVT-1 in Guadalcanal with 128 available to 1st Marine Division. Usage in the field revealed that the LVT was too thinly armoured for a rapid deployment back and forth the ships and landing site, but the Marines saw the vehicle's potential as an assault vehicle. So in June 1941, the Marines push forward with a Roebling design of the LVT armed with a gun turret. In order for this to be possible, the LVT underwent a redesign into the LVT-2 "Buffalo", which had a new powertrain and suspension to allow better performances on land and able to carry up to 6,950 pounds in equipment.

Early on it became clear that the LVTs that were in production - which were usually armed with only machine guns - did not have the firepower necessary to support the infantry, especially when facing enemy pillboxes, bunkers, and other entrenched positions used by the Japanese Army. In order to solve this problem, a fire support vehicle based on the LVT-2 was designed. It had a turret that was very similar to the turret of the M3 Stuart light tank. Before the introduction of the better armed LVT(A)-4 in 1944, 510 LVT(A)-1 were built by the Food Machinery Corporation.

The LVT(A)-1 was based on the LVT-2, but with a number of changes to make it a support vehicle. The LVT(A)-1 was fitted with a turret very similar to that of the M3 Stuart, and it was armed with the same 37 mm M6 cannon with 10 degrees of gun depression and 25 degrees of elevation. The main gun was fitted in the M4 mount, and there was a coaxial .30 cal (7.62 mm) machine gun. At the rear of the vehicle, two .30 cal Browning M1919A4 machine guns were fitted, and the gunners were protected by standard Navy gun shields. The deck was armoured, and the vehicle was fully enclosed. The front of the turret had 51 mm (2-in) of armour, and the ammunition was stored a number of racks throughout the vehicle. The vehicle had a crew of six; a commander and gunner in the turret, the driver and machine gunner in the front of the crew compartment, and two machine gunners at the rear of the vehicle. The LVT(A)-1 was a pure fire support vehicle, as there was no room inside to transport personnel or cargo. All the other features of the LVT(A)-1 were the same as on the LVT-2.

The LVT(A)-4 was essentially just an LVT(A)-1 but equipped with a different turret. It was still based on the LVT-2, but it has the turret of the 75 mm Gun Motor Carriage M8 "Scott" instead of the turret of the M3 Stuart light tank. Additionally, the two rear machine gun positions were removed; this reduced the crew to five, with the commander, gunner, and loader in the turret and the driver and co-driver in the front crew compartment. In total, 1,890 LVT(A)-4 vehicles were built, and they largely replaced the LVT(A)-1 in service. The 75 mm gun was more effective against fortified positions, but the 37 mm gun of the LVT(A)-1 was as effective or more effective against enemy armour. But, the main goal of the LVT(A)-1 and -4 was to support the infantry, not to destroy enemy armour - which is why the LVT(A)-4 was more effective.

The LVT(A)-4 was itself the basis of an improved fire support version of the LVT, the LVT(A)-5. This was an improved model of the LVT(A)-4. It featured a gyro-stabilizer for the main gun, and a powered turret. In the late 1940s many LVT(A)-5 received additional armour plating. A total of 269 LVT(A)-5 were produced.

The first usage of the LVT family is as a cargo carrier in Guadalcanal, it was unarmoured at the time and only had machine guns as their main armaments. Their next usage was in Tarawa, which saw the first usage of the newly designed LVT-2. The vehicles in both cases carried ammunition, troops, and wounded back and forth the ships and the beach. After Tarawa, the LVT inventory increased by the battalion, as well as the appearance of the gun-armed LVT(A)-1 and LVT(A)-4. The LVT family continued to see service in Bougainville, the Marshall Islands, Saipan, Peleliu, Leyte (its largest usage in the war), Iwo Jima, and Okinawa. The LVTs also saw use in South East Asia in use by the British, but they never saw combat action.

Outside the Pacific, the LVT also saw use in the European Theater of Operations. Their first usage was in North Africa in November 1942 during Operation Torch to land troops, where its best usage was to get stranded landing boats back into action. The LVTs were also given to the British as part of Lend-Lease. The LVTs were used in the Normandy landings and other operations in Europe such as crossing the Rhine River in Germany and Po River in Italy.

After World War II, the LVTs continued to see action in the multiple conflicts in the world. A number were given to the Chinese Nationalists in the Chinese Civil War by America. Many of these were captured by the Chinese PLA, with some converted to use a 75 mm howitzer or a ZIS-2 anti-tank gun. The Americans used a number of LVT vehicles in the Korean War, notably the landing at Inchon and the attack on Seoul. The French also used American-supplied LVTs during the Indochina War and the Suez Crisis.