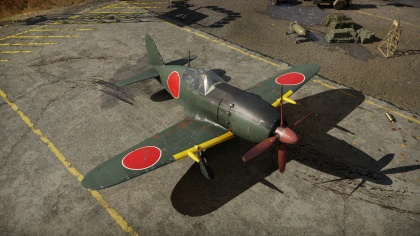 The premium variant of the J2M5 wields two 30 mm Type 5 cannons in the wings. The stock belts are particularly lacklustre but since this aircraft comes furnished with all modules upon purchase, any other belt can be selected. The best anti-air belts for these weapons are the "Tracers" belt as it is comprised entirely of HE-T rounds.

For ground attack, the J2M5 can equip two 60 kg bombs under the wings. While not the biggest, these bombs can help a team win a match, especially in Arcade Battles. The J2M5 can also wield armour-piercing ground targets ammunition (solid practice rounds) for its 30 mm cannons which can easily destroy light and medium tanks.

The J2M Raiden was the result of the Japanese Navy request for an interceptor, the need of which became ever apparent after the experiences with the American raid on the Japanese homeland shortly after the attack on Pearl Harbor (Doolittle's Raids).

The Chief Designer was Jiro Horikoshi, who also designed the famous A6M fighter. However, unlike the A6M, the J2M was geared for a completely different role, focusing more on the rate of climb and speed than range and manoeuvrability. The Raiden had only a limited range and was solely used as an interceptor.