Difference between revisions of "A7M2" 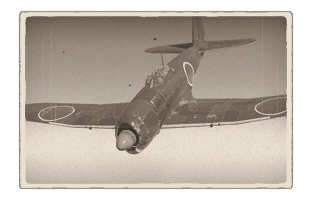 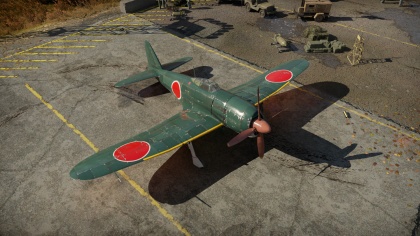 The A7M Reppu was designed to be an improved version of the famed A6M Zero fighter, and as such, retains some of its legendary older brother's characteristics. The Reppu is an overall smooth operator at most altitudes thanks to its decent acceleration, vastly improved speed and decent manoeuvrability. Less manoeverable than the Zero, it can at certain times really struggle in dogfights, the rudder has a want to fight you at every turn requiring forceful control and slight damage to the airframe negates most of its ability to dogfight anything but the slowest turners effectively. The most noteworthy change is the replacement of the underpowered Nakajima Sakae Radial engine with a significantly more powerful Mitsubishi Ha-43 Radial. This new engine propels the Reppu to higher speeds previously unobtainable by the Zero and turns this aircraft from a nuisance to a universally feared opponent.

The A7M is played almost exactly like the Zero, but with a few changes due to the good performance. Due to its high top speed (for an IJN plane at least) and good dive speed, it can tailor to any form of dogfighting. It can turn fight in the right situation, energy fight, Boom-&-Zoom and others.

It is mandatory to keep your energy up at all times, as you can suitably engage opponents in multiple ways by doing so. Keep your speed at a medium and maintain altitude. A low flying Reppu is an easy prey for diving Americans and Russians that dive on you. However, you can attempt to pull rolling manoeuvres to avoid their strafe or turn as soon as they get within range.

The A7M2 Reppu "Strong Gale" was designed to replace the A6M series aircraft. Nicknamed the "Sam" by allied pilots.

In 1940 the Japanese Navy requested a successor to be made for the A6M, the specifications were for an aircraft that was faster and could climb quicker to counteract against allied attacks with more ease. While still retaining the legendary manoeuvrability of the A6M. This provided an extreme contradiction of requirements as to make the plane faster would require an engine that was not built yet, it would be heavier and bigger than the A6M's "Nakajima NK1C Sakae-12" engine. Requiring the airframe of the A7M to be bigger and stronger to handle the increased weight.

Calculations by Horikoshi's development team suggested that in order to have a climb rate and top speed needed by the Navy they would have to use a minimum of 2,000hp engine. This proved to be an exceptional challenge as the two engines which theoretically could develop this power were still under development. In 1944, 4 years after the start of the project the first A7M1 prototype was developed with the 2,000 hp  "Nakajima Homare 22"  engine. Unfortunately, due to the increased weight and drag of the airframe (to handle the heavy engine), the A7M1 could only achieve roughly 350mph (570kmh) and did not meet the climbing requirements. It did, however, meet all the manoeuvrability requirements. With an abundance of A6M series aircraft being manufactured, they did not see any need to start development of the A7M as it currently was. The Japanese Navy requested further development of the A7M, as the A6M was starting to show it's age.

3 more variants of the A7M would be designed, with the last variant A7M3-J sporting a  2,200 hp turbo-supercharged Mitsubishi Ha-43 engine. Unfortunately, this variant was never built into a prototype, it would have sported 6 x 30 mm Type 5 cannons.

The last of the fully operational variants would be the A7M2 of only 8 were built. Equipped with a 2,200 hp Mitsubishi Ha-43, allowing for the plane to meet all criteria and exceed some criteria set by the Navy, the A7M2 was flight tested by Saburo Sakai one of Japans ACE pilots of the war. After the flight test, Sakai was extremely impressed with the A7M2. The Japanese Navy decided to develop the A7M2 as their main carrier-based fighter in late 1944.

In late 1944 an earthquake strained the manufacturing of the A7M2 causing only 8 to be built. In early 1945, Allied bombings of Japans mainland lead to the destruction of the A7M plans. This ceased the development of the A7M2 and the plane would never see combat. Only a single A7M2 would be built in 1945 due to allied bombings.

10 A7M variants were built (including prototypes), with none surviving the war.