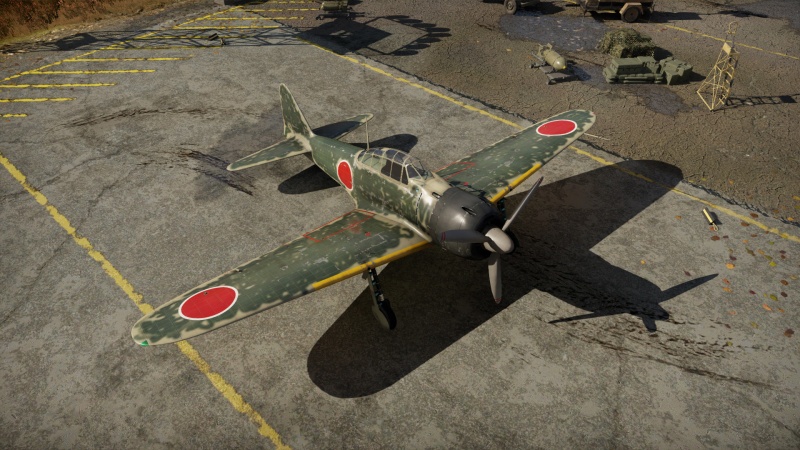 If you have come this far into the Japanese tech tree playing the Zeroes, you should already know that this plane is all about turn fighting. The A6M3 Reisen mod 22 comes after the A6M3 in the tech tree and plays very closely to its previous version. The only main difference is its speed and camouflage.

The A6M3 line of planes is a very unique set of planes getting better and better as they go on. This modification (or Mod 22) features a better engine, turn rate, energy retention and a green camouflage instead of the off coloured yellow, cream colour camouflage on the other Zeroes before.

In April of 1942, a new A6M model fighter was launched. The main difference between the A6M3 model 32 and the A6M2 Model 21 was the new Sakae 21 engine (1130 hp), which had a two-stage supercharger making it more stable at higher altitudes and a propeller diameter of 3.05 m (150 mm greater than that of its predecessor). The engine was much heavier and longer than those used in previous models, so to prevent displacement of the centre of gravity the engine was moved closer to the cockpit and the main fuel tank's capacity was reduced from 518 to 470 litres.

Also, the folding wingtips were removed, which increased the plane's dive speed limit but reduced its manoeuvrability and range. The latter side effect was particularly important as it made it impossible to use the A6M3 effectively during the 1942 campaign in the Solomon Islands. The 20-mm guns were replaced by Type 99-I model 3s, and their ammunition was increased to 100 rounds. Also, the aircraft could carry two 60-kg bombs.