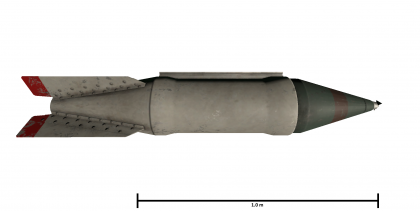 The Type 3 No.6 rocket bomb is a moderately slow projectile with a maximum speed of 270 m/s with 2.5 kg of equivalent TNT explosiveness with approximately 30 mm RHA equivalent penetration and an anti-air splash radius of approximately 30 metres, comparable to the American HVAR rocket. All aircraft that feature this projectile also feature the superior Type 5 No.6 Mod.9 rocket, with exception of the A6M5 Hei.

This rocket is a rather mediocre ordnance capable of destroying only aerial and lightly armoured targets. Where available, research and utilise the Type 5 No.6 Mod.9 rocket instead, however this rocket is sufficiently light as an intermediary addition to your fighter aircraft.

In the late war period, Japan started redirecting aircraft priorities towards the destruction of enemy bombers and fleet. To assist with the defence, several rocket designs were approved for use, one of which was the Type 3 No.6 pyrophoric rocket bomb.

It has been said by the history team behind the production of the anime series The Magnificent Kotobuki (荒野のコトブキ飛行隊) that they may have been loaded with up to 6 or 8 pairs on the Ki-43 "Hayabusa" and Ki-84 however such documents proving the historical usage by said aircraft are either absent or have not been found by the international community, or could have been misinterpretated such as in the case of the jet-powered J7W2 theoretical adaption of the J7W1.