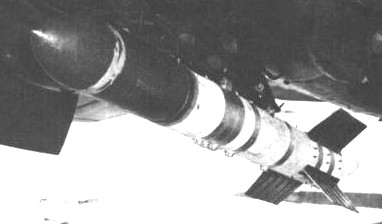 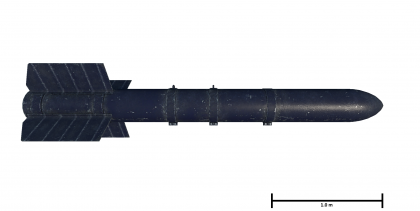 Side view of a Tiny Tim unguided rocket.

During World War II, many attackers and dive-bomber aircraft were lost to anti-aircraft fire when attempting to bomb enemy ships. A hail of bullets and explosive shells attempted to knock these aircraft out of the sky before they could deliver their payload. In response to these challenges, the United States Navy sought to develop a weapon in which to be able to sink a ship while minimizing the threat of anti-aircraft fire to inbound aircraft. The outcome of this development resulted in the Tiny Tim anti-shipping rocket, the largest rocket produced at the time, even dwarfing the German Nebelwerfer-based BR 21.

To help speed up the development process of the Tiny Tim rocket, engineers scrapped together existing parts and equipment where they could to help save time. The rocket body was manufactured from 11.75 in (298 mm) used oil field pipe and available in abundance and specifically because it was the perfect size to adapt existing 500 lb (226.7 kg) semi armour-piercing bombs in the military's arsenal. Fitted with a 24-nozzle engine firing on solid rocket propellant, the 10.25 ft (312 cm) Tiny Tim could travel at 548 mph (245 m/s). Utilising its TNT warhead, it was used to take out coastal defence guns, bridges, pillboxes, tanks and was credited with sinking one Japanese ship and damaging another. 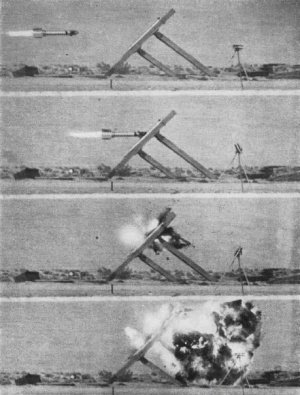 Testing the Tiny Tim rocket against a 3-inch armoured target.

The Tiny Tim was a massive rocket weighing around 1,285.3 lbs (583 kg) and could only effectively be carried by more stout fighters, dive-bombers and attackers/medium bombers. The 3,000 lbf (13 kN) blast from the ignition of the solid rocket propellant could damage the delivery aircraft so the rocket was modified to be dropped like a bomb, attached to the rocket was a lanyard which would snap off after the rocket dropped several feet which would initiate the rocket motor safely away from the aircraft.

Due to the size and weight of the missile, the main function as a semi-armour piercing rocket was to not explode on the surface of an object, but rather to partially burrow into the object before exploding. This would allow the warhead to penetrate the hull of a ship, the concrete of a bunker or even weaken tank armour through blunt force before exploding sending shock waves from the inside-out rather than just from the outside-inward. 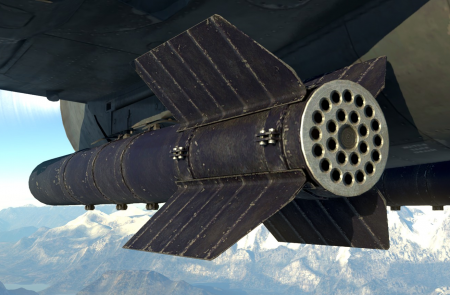 A Tiny Tim unguided rocket mounted to a F6F-5N. Notice the detail of the rocket motor.

Towards the end of World War II saw the invention of equipment and weapons intending to help spare the lives of military personnel and their equipment while still inflicting damage on the enemy. One such invention was the United States Navy's Tiny Tim rocket which could hit a ship while the attacking aircraft remained safely outside of the range of the anti-aircraft fire. The massive 1,285.3 lbs (583 kg), 10.25 ft (312 cm) TNT tipped rocket fit the bill. To expedite the manufacturing of this rocket, available resources were used. 500-lb semi armour-piercing bombs already in the inventory were fitted to used oil-well casing pipe which could be found in abundance at abandoned oil wells.

Tiny Tim saw limited service in World War II and was used in the battle of Okinawa and later during the Korean War. Targets selected included bridges, concrete reinforced pillboxes, tanks, ships and other hardened targets as the rocket specialized in embedding itself into an object before exploding causing both explosive and shock damage from within the target.