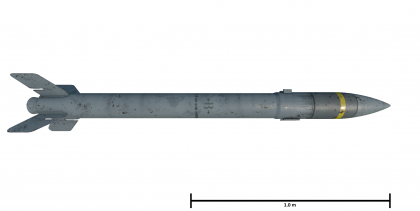 The m/56D rocket (scale is approximate)

The m/56D rocket has a mass of 41 kg and an explosive mass of 3.7 kg. The rocket flies at 650 m/s, which is fast enough to keep it good. The rockets use fins to stabilize in flight.

The m/56D rocket has a HEAT warhead (high-explosive anti-tank), which has an extremely good penetration against armour. However, it is much less effective against composite or reactive armour. The post penetration damage is pretty good and will usually take out an opponent with one solid hit.

The m/56D rocket's mass and explosive mass are very similar to the British RP-3 rockets. However, the m/56Ds pack much more of a punch when it comes to penetration. Since the rocket is more modern it also flies at a much faster speed than the RP-3 rockets but is slightly slower than the American Zuni Mk32. Its penetration is similar to the Zuni Mk32 rocket.

These rockets will be most effective against ground targets: tanks, light vehicles, and pillboxes. These rockets have a learning curve. You will have very little success if you try to destroy bases with this rocket, as opposed to bombs.