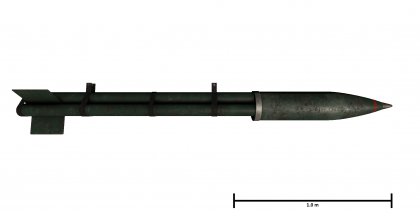 The Triplex R.P. is an unguided, high-explosive rocket developed by the British in the mid to late 1940s. It is a development of the ubiquitous RP-3 rocket. It was first added in the Update 1.99 "Starfighters" and is only available for use on a single vehicle, the Hawker Sea Fury.

The Triplex R.P. is an assembly of three RP-3 engines clamped together behind an explosive warhead, with three larger fins replacing the four typically found on each RP-3. The whole rocket weighs 139 kg. Its engines propel the rocket and its 12.7 kg TNT payload at a maximum speed of 245 m/s. The Sea Fury can carry four of these rockets at a time. They are fired individually, with the order being outer left, outer right, inner left, inner right. This is important to remember for rockets, since the position on the wing will affect the trajectory. The Triplex rockets are powerful tank-busters and can easily destroy ground targets in Air Battle as well.

The Triplex carries a Semi-Armour Piercing (SAP) warhead (similar to the RP-3) with 12.7 kg of explosive filler. The high explosive power on its own can penetrate an astounding 63 mm of armor at any range and angle. This makes it an extremely potent anti-tank weapon, and the sheer size of the warhead will help ensure tank knock-outs that an ordinary RP-3 might not be able to achieve.

The Triplex is a devastating rocket capable of destroying hard targets up to pillboxes in Air Battle. In Ground Battles, a well-aimed Triplex rocket will shred through the roof of any tank the Sea Fury can encounter at its BR. The explosive power of the Triplex can penetrate 63 mm of armor at any angle, allowing for more lenience in the angle of attack than other rockets like the RP-3. And, with almost 2.5x the explosive mass of the RP-3, you can safely expect the Triplex to inflict significant damage. While the explosive yield is strong, a direct hit on the weak points of an enemy tank is still required to ensure destruction.

The Triplex R.P.'s developmental history is largely obscure. What is known is that the rocket was developed, produced, and mounted on the Hawker Sea Fury sometime before the start of the Korean War. The Hawker promotional brochure for the Sea Fury mentions the rockets by name as the "Triplex R.P., 180 lb. (82 kg) head"[1]. During the Korean War, due to complications with carrier operation, the Sea Fury typically employed rockets in its ground strike missions[2]. However, in late 1950 - early 1951, the British Admiralty issued an order that the Sea Fury's maximum rocket load while carrying drop tanks, which was most of the time during the conflict, would be reduced to only four rockets due to the harsh conditions of the Yellow Sea[2]. Presumably, the Triplex would be too heavy to be carried under these restrictions. If the Triplex saw use, it would have been limited at best.