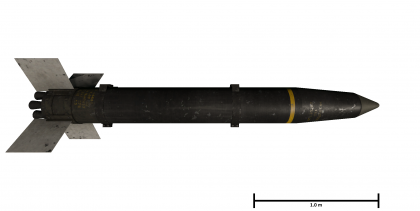 The Uncle Tom is a British airborne rocket.

A direct hit will destroy any tank or light pillbox, as each rocket carries more than 50 kg of TNT.

Uncle Tom rockets are fired one at a time, and not in pairs like smaller rockets. They are, in practice, not very different from Air-to-ground guided missiles found in high tier vehicles when fired without guidance, and can be used as such against lightly armoured targets with ease. However, they are a bit difficult to aim, and may be challenging to use effectively against heavy and even many medium tanks. When scoring a direct hit, though, these rockets are very rewarding. They are veritable bombs that can be aimed. A hit in the general proximity of an SPAA will destroy the ground vehicle due to overpressure and splash damage.