The Flz.-Rakete Oerlikon is an Israeli airborne rocket.

The Flz.-Rakete Oerlikon is a very reliable unguided rocket with a very high penetration (150 to 300 mm armour) and a maximum velocity of 651 m/s. Its high penetration makes it perfect for attacking armoured vehicles from all possible angles. Each rocket carries 1,6 kg TNTeq. In most cases, the explosive mass is sufficient for destroying tanks with one hit. Due to its high velocity, it can also used against other aircraft, especially slower and bigger targets like bombers and ground attackers. 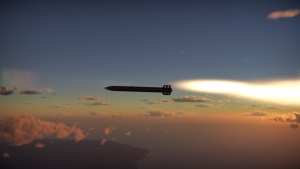 The 8cm Flz.-Rakete Oerlikon is an armour-piercing rocket with a good penetration power. The post-penetration damage of the Flz.-Rakete has low spall. The rockets work really well against vehicles and pillboxes but because of the shaped charge, they perform less well against soft targets like AA emplacements and howitzers.

Perfect for destroying tanks in Ground RB, and pillboxes and other vehicles in air battles. As the explosion is very small compared to HE rockets, it is not effective against soft targets unlike other rockets. On the other hand, the good armour-piercing capability makes the rocket very suitable for tank busting. Tanks are best engaged from the side at distances between 300 and 600 m.

In RB, it is also a reliable secondary weapon for air combat. In dogfight and head-on, situations fire salvos of at least 4 rockets. When tailing bombers, aim thoughtfully and fire single rockets to be able to re-adjust. Once you figured out the correct lead, you can fire salvos. Hits from 1.5 to 2.5 km are even possible.