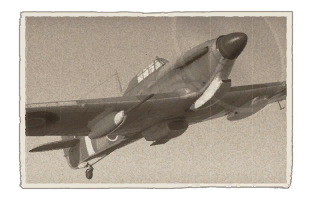 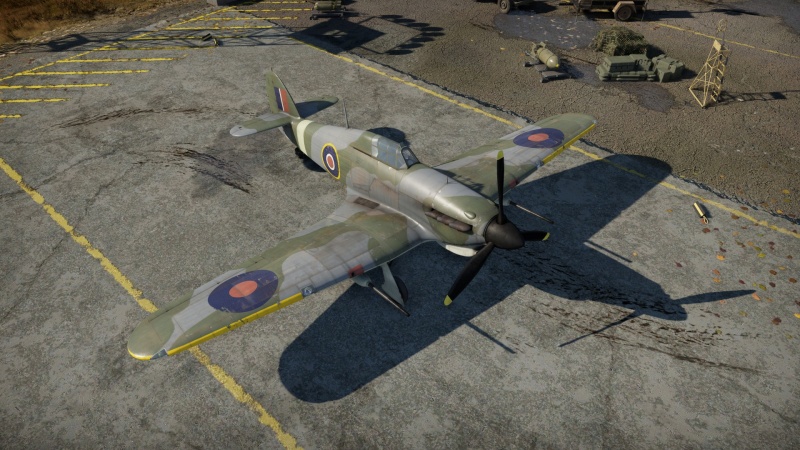 The Hurricane Mk IV is a rank II British strike aircraft with a battle rating of 2.3 (AB/SB) and 2.0 (RB). It was introduced in Update 1.51 "Cold Steel". A ground-attack variant of the Hurricane, the Mk IV can carry an arsenal of high-calibre cannons, rockets, or bombs.

Some players feel that this plane is overpowered in Arcade Mode with its twin 40 mm cannons. Since the planes are relatively slow in this rank it is easier to shoot them down. However, the weight of the cannons makes the plane difficult to handle, making it an awkward turn fighter, and like any other Hurricane it is not as well suited to Boom & Zoom due to its slow climb rate, made worse by the weight of the cannons. Additionally, players at this rank rarely have the skill and accuracy necessary for this plane to reach its potential. It is recommended to go for ground targets like light and medium tanks, AAA and armoured cars. This is how you would help your team succeed in battle. However, equipping Air Target rounds and turning enemy planes into aerosol can be infinitely more fun.

The Hurricane Mk IV is armed with:

The Hurricane Mk IV can be outfitted with the following ordnance:

The Hurricane Mk IV fits into an interesting niche in the British tech tree. It takes the usual Hurricane airframe, removes the usual large number of machine guns (except two), adds armour plates around the engine and cockpit. Then there is the armament. Two 40 mm guns on the wings, which can equip high explosive or armour piercing rounds. You also have the choice to swap these guns for rockets or bombs depending on your targets/play style. This makes the Hurricane most suitable for two roles. These are:

Ground Attack: Being a little more agile than the usual attacker, but still very well armed, the Hurricane Mk IV makes a good ground attack aircraft. The 40 mm cannons can penetrate most vehicles from a steep angle or from the side with armour piercing ammunition. However, they cause very little post penetration damage and are inaccurate. Against light vehicles they can be very effective, but heavily armoured vehicles like KV-1s and even T-34s can usually shrug off the 40 mm rounds. Beware that the cannons are very hard to score hits when aiming for smaller targets, unless you zero the guns to a short distance. The guns also have a very large recoil which makes them furthermore inaccurate. The RP-3 rockets are another good option. A direct hit with one of these rockets to the side/rear/top of an enemy tank will cause serious damage. They cause good explosive damage and can penetrate around 60 mm of armour, but are quite inaccurate and hard to aim for inexperienced players. You also have access to 250 lb and 500 lb bombs, which are ideal for taking out singular high value targets.

Bomber Hunting: The two 40 mm cannons can be deadly against any aircraft they hit. Bombers particularly fit into the category. They are generally big, slow targets that are easy to hit with the otherwise inaccurate and difficult to aim 40 mms. Usually it only takes one or two hits and BOOM! The HE rounds in the air targets belt work particularly well, but for certain targets, the AP rounds are more suitable. Heavily armoured aircraft like the B-25 or the IL-2 can sometimes shrug off the HE rounds, due to their low penetration values, but the AP round can be deadly. For particularly large targets like the BV 238, you can even use rockets, which are sure to cause massive damage.

Despite its heavy handling and only two 7.7 mm machine guns, some more experienced players use the Hurricane as a fighter. If you can get the 40 mms on target, they are deadly. The two 7.7 mms can come in reasonably handy too if you're accurate with them, but they are not suitable for prolonged combat. There are a few ways to use the Hurricane in this way:

Boom & Zoom is the main tactic to use for this Hurricane. The turn rate of this aircraft cannot compete with most other nations, and it has very poor energy retention. The best thing to do in this aircraft is to climb at the start of the round and go bomber hunting, as it is extremely efficient at shooting down the slow, less manoeuvrable targets it will be pitted against at its battle rating. Take your time when taking a shot, tank calibre guns are not meant to be wing mounted and are very inaccurate as a result, so if a shot doesn't look good to you, do not fire. Boom and zoom is the tactic that should always be employed with this aircraft. Climb, find your target, dive, fire, then using the speed gained in the dive, climb away. Rinse and repeat. Under no circumstances should you attempt to turn fight with this aircraft. Almost any other plane will be able to out turn you. If you do find yourself with an aircraft on your 6, dive and gun the throttle. You should be able to out dive most aircraft. In a ground attack role, this aircraft can be used in much higher battle ratings, where the rockets / 40 mm's remain effective, even against heavy tanks.

If using the Hurricane Mk IV in higher rank matches, beware of enemy fighters. Almost anything will be able to catch you and easily destroy you. To avoid being obliterated by enemy aircraft, try to spawn only when you have air support or good SPAA coverage. Your twin 7.7 mm will not be enough to deter enemy fighters, but if you are a good shot, the twin 40 mm (with air targets belt) can take out even the most heavily armoured fighters.

The Hawker Hurricane Mk IV was the last major production modification of the Hurricane series. The main feature was a new wing design, which could mount eight RP-3 rockets or two 40 mm Vickers S guns for attacking ground targets. The Hurricane Mk IV may have been equipped with more powerful Merlin 24 or 27 engines, but it is disputed. The Mk IV Hurricane received an additional 350 lb (159 kg) of armor protection for the pilot, radiator, and fuel tanks. A dust filter was added for operation in desert environments.

The Hurricane Mk IV was used as a ground attack aircraft in the European theater until being replaced by the Hawker Typhoon in 1944. It was noted that the top speed of the Hurricane when armed with RP-3 rockets was reduced significantly, and the Hurricane had high losses against German anti-aircraft batteries. One example of this occurred on 20 December 1943, when No. 184 Squadron RAF attacked a German V-1 flying bomb launch site. The squadron of four aircraft was equipped with Hurricanes, and only 1 plane survived the flak long enough to attack the target, with the other three being shot down before they had the chance.