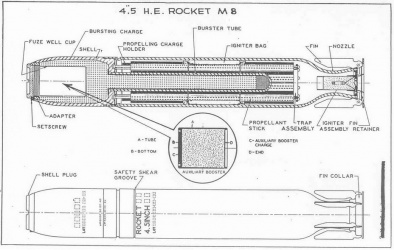 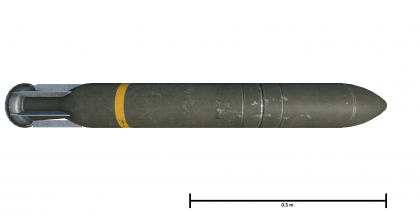 The M8 rocket (scale is approximate)

The M8 rocket requires a tube launcher to launch (as opposed to being installed directly to external hardpoints) and this is accomplished by mounting an M10 cluster launcher to the underside of the aircraft's wings or fuselage belly. The M10 is a cluster of three 10-foot tubes manufactured from plastic (M14s are made from steel and M15s are constructed of magnesium alloy) and are banded together in six places and are secured to the aircraft via two mounting straps, front and rear. The rear strap also bears the electrical connections which link up to the rockets once in the tubes as the firing links. The release and contact mechanisms are protected from flying links and fired casings ejected from the wing guns to prevent accidental damage or drop release of the M10 launcher. 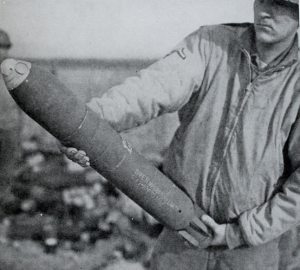 A soldier holding an M8 rocket prior to loading in a launch tube.

After slamming into a target a slight delay will set off the explosive mass of the missile, causing the TNT shell to detonate along with fragmenting the rocket body and motor. Damage is caused by both the high explosive and fragmentation.

The M8 rockets are typically mounted on an aircraft in groups of three (usually two launchers of three). The M8 rocket is typically best utilised against personnel, installations and light armoured vehicles due to the fantastic fragmentation of this rocket upon impact and explosion.