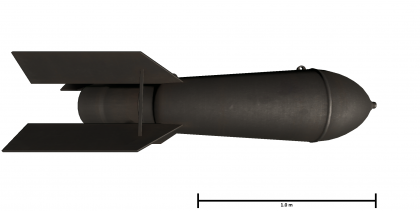 The TT-250 rocket (scale is approximate)

The TT-250 is a large-calibre high-explosive rocket that is used on the RBT-5 event vehicle.

The TT-250 is one of the most dangerous weapons in War Thunder with the ability to cause major damage or destroy almost any armoured vehicle that is hit by it. It is limited by only having two of them present on a BT-5 hull, as well as having very awkward aiming and flight characteristics. Although they are a rare sight, TT-250 can bring great rewards to those who are able to use it wisely and a swift end to those on the receiving end.

The rocket, or "tank torpedo," was developed in the early 1930s as a potential armament for armoured vehicles. It was selected to be placed on a BT-5 and the arrangement of having two placed into launchers on the turret was selected, creating the RBT-5. Tests were conducted from around 1933 to 1935 but the project was ultimately cancelled to the limited use of the vehicle. This would not be the last time that the Soviet Union attempted to create a "rocket tank," although it was certainly one of the earliest pursuits.

The TT-250 has the capability to destroy any tank in the game, even those that are large and very heavily armoured. The direct high explosive damage dealt on impact is enough to instantly destroy a Maus, so any other tank stands little chance of survival. There is a degree of splash damage, although it is generally only effective against small and lightly armoured vehicles. Any direct hit to a tank is very likely to destroy whatever it hits.

The TT-250 is largely unlike any other rocket in the game, and thus effectively has no direct analogues. However, there are other rockets that are used in a similar manner, only not to the same degree of effectiveness.

During the development of the BT-5 high speed tank, there were various other projects aimed at modifying and improving the BT-5 in different ways. Some were implementing underwater and swimming devices to the tank, switching out the engine for a diesel with 300 HP, and there was an idea to create a "rocket tank." Carried out under the direction of the Office of Motorization and Mechanization of Red Army (УММ РККА), these tests were often just single designs testing out a new concept and observing the successes and failures of each idea. Work on the BT-5 experiments began in October 1933 and an engineer was tasked with fitting a 250 kg "tank torpedo" (TT) to the BT-5. The main idea was to be an effective weapon against enemy heavy tanks and breaking through heavily fortified areas.[1]

The TT-250 was first tested from 1931 to 1932, where short range tests between 300 and 1,800 m were conducted at a scientific research test site in Leningrad and at a training ground near Kuzminki. Following the testing, it was decided to mount them onto a tank. By the end of 1933, the idea of having two of these mounted as an additional armament to the BT-5 was realized and the new name of RBT-5 was given to this design.[1] The rockets were placed into launching bins on either of the turret, with vertical guidance being performed by a geared mechanism from inside of the turret and horizontal guidance being provided by the rotation of the turret. Maximum elevation of the launcher was 48° which allowed targets to be engaged up to 1,500 m away with an electric firing mechanism. The rocket was 420 mm in diameter and 1805 mm in length and consisted of a 130 kg warhead with a secondary charge of 13.5 kg weight in the tail. Fuses from aerial bombs were used to detonate the rocket on impact or at a time delay, and the head of the rocket had an armoured cap to protect it.[2]

The project was ultimately cancelled due to the limited range and low chance to hit a target, along with the added vulnerability of the RBT-5. Work was performed on 100 kg and 300 kg variants although these were also eventually cancelled. Out of the failure of the TT-250 and the RBT-5 came the idea of mounting RS-132 rockets to the BT-5, but this too was only an experiment.[2]