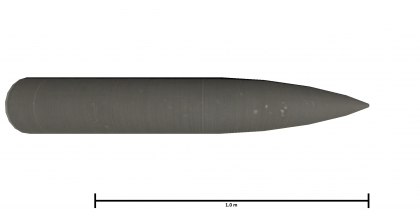 The S-1of rocket (scale is approximate)

The S-1of is a Soviet air-launched rocket with a diameter of 212 mm. It is a anti-infantry and soft-targets tube-launched high-explosive rocket.

The S-1of is a HE rocket type in war thunder with a peak velocity of 440 m/s. However, because the S-1of is only found on the MiG-15bis ISH in a mount pointed downwards, it requires particular special circumstances to be utilised effectively.

The S-1of is a HE rocket type with 9.3 kg of TNT and approximately 35 m fragment dispersion radius with 61 mm armour penetration.

Very similar to the S-21 in performance, but usage technique is drastically different due to its firing angle of approximately 25 degrees.

While intended for ground strikes, the best place to use this rocket is for destroying air targets due to the awkward firing angle. Currently only the MiG-15bis ISH has these rockets so the following Pros and Cons are in reference to this aircraft using them.

Example usage as an air defence weapon against bombers