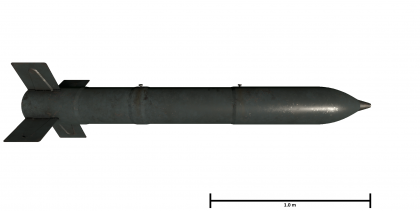 The S-24 rocket (scale is approximate)

The S-24 is a Soviet air-launched rocket with a diameter of 240 mm. It is a heavy unguided HE bomb with a rocket motor attached and basic aerodynamic fins and nose cone.

The S-24 is a HE rocket type with a peak velocity of 410 m/s and minimal launch angle variance. The S-24, alongside the smaller S-21 and S-1of rockets, are often called "Tiny Ivans" due to their similar usage in ground battles to the Tiny Tim.

The S-24 rocket has approximately a 71 m fragment dispersion radius.

The S-24 performs similar to the smaller S-21 and S-1of ground strike rockets, only with larger explosive factor.

The S-24 has a timed fuse so it may be used against aircraft and the strong explosive filler allows it to be used to knock out Ground Vehicles, pillboxes and even ships with 65 mm penetration and a TNT filler of 25.5 kg.

The S-24 was an unguided rocket intended for anti-infantry and other light target ground strikes with a ground proximity fuse which can be set between 3 and 33 metres with a forward direction biased shrapnel spray. Initially, it did not have a proximity fuse, however, this was added later as testing showed over 70% of the shrapnel was uselessly embedded into the ground in the vicinity where the rocket landed.