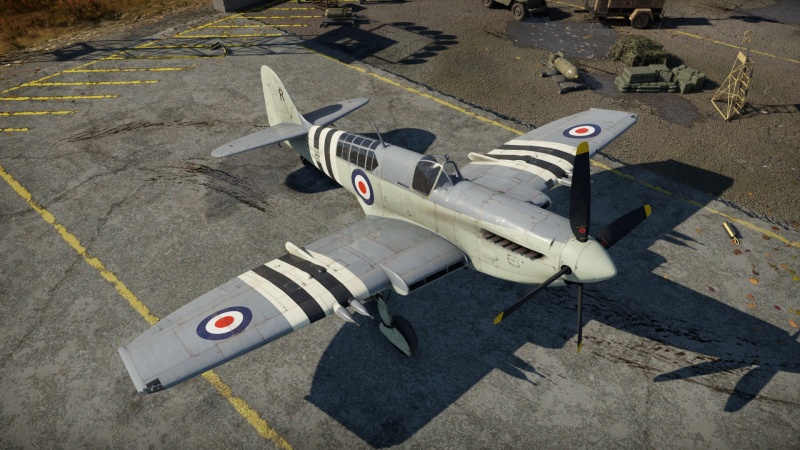 The Firefly FR Mk V is a rank III British strike aircraft with a battle rating of 4.0 (AB/RB/SB). It was introduced in Update 1.49 "Weapons of Victory".

The Firefly FR Mk V is armed with:

The Firefly FR Mk V can be outfitted with the following ordnance:

The Firefly FR Mk V is one of the least maneuverable aircrafts in its grade, especially before upgrades. The engine is severely limited by the aerodynamic drag, with the wings losing a lot of performance at lower speeds. The lack of turn-fighting capabilities makes engaging in a fight with the enemy ill-advised. In a straight line, the plane can somewhat retain its speed, but it can't outrun its contemporaries at the rank.

The four wing-mounted Hispano Mk Vs are as powerful as they are difficult to use. The guns are very inaccurate, causing shots at ranges of over 600 meters to be fairly ineffective versus small to medium targets. This is made up for by the extremely long burst duration of the cannons, with a very high fire rate. You should watch your trigger though, as while the ammo count is rather sizeable, you can chew through it very quickly.

Engaging planes is all in all made difficult. Surviving mostly relies on support from your teammates, or not letting the enemy get on your tail in the first place. If you find yourself in a head-on fight, you may be able to overpower the enemy, as long as you can keep the target in your sight. Overcompensating and letting the enemy fly into your line of fire will be the most important here.

The interceptor spawn of the plane lets it reach the enemy ground targets very quickly, where the plane really starts to shine. Only a very short burst is needed to destroy most of anything with no or little armour, meaning you can drain a lot of tickets of the enemy team very efficiently.

Although the plane can be surprisingly sound structurally, any damage to the radiators has the possibility of instantly draining all the water coolant, causing the engine to overheat and knocking it out of fight. If you need to engage in a fight, try to keep altitude so that you have enough potential energy to return to the airfield for repairs even if the engine dies. Any damage to the engine also causes a massive loss of power, even if the engine is spinning you can find yourself stalling.

The Fairey Firefly had entered service in 1943 and served successfully in the closing stages of the Second World War as a multi-role, carrierborne fighter/strike aircraft. In 1944 a Rolls-Royce Griffon 72 was fitted to the Firefly for testing; the resulting improvements led to the Griffon 74 powered Firefly Mk.IV which entered service in 1947. The Mk.IV replaced the earlier three bladed propeller with a four bladed unit fitted to the new engine, and moved the radiators from the chin position to underneath the wings. The wings were also clipped to increase the roll rate. The leading edge of the tail fin was also extended and two under wing fairings carried fuel and a radar scanner in port and starboard respectively.

The Firefly Mk.V built on the success of the previous variant with further modifications. For specialized roles, sub variants of the Firefly included a number of internal changes for the standard day fighter/reconnaissance variant, night fighter and anti-submarine aircraft. Power folding wings were also introduced during the life of the Mk.V which greatly assisted the efficiency of deck operations.

812 Naval Air Squadron was the first front line unit to re-equip with the Mk.V, at Eglinton in July 1948. When the Korean People's Army crossed the 38th Parallel in June 1950, Korea was plunged into war and the carrierborne aircraft of the Fleet Air Arm were in action within days of the outbreak of hostilities. HMS Triumph was the first British carrier in theatre, but the embarked 827 NAS were actually still operating Second World War vintage Firefly Mk.Is. It was the Mk.V which replaced it in theatre which proved to be the most prolific variant of the conflict, being operated by 810, 812, 817, 821 and 825 Naval Air Squadrons. The Firefly was regularly engaged in strikes against key infrastructure such as bridges, railways, harbour installations and industrial sites. Operating in a range of conditions including sub-zero temperatures and storms, the Fireflies served alongside Seafires and Sea Furies to maintain an impressive rate of operations, proving to be resilient to the elements and the rigours of continued deck operations in anger. In 1952 a record-breaking day of operations was achieved from HMS Ocean when Fireflies and Sea Furies flew 123 sorties in a single day. Fireflies of 825 NAS were also involved in ground attack sorties during the 1954 Malayan Emergency.

Post-war, the Firefly served as an export aircraft with Canada, Australia, Denmark, the Netherlands, Ethiopia, Thailand, Sweden and India. The venerable aircraft left the service of the Fleet Air Arm in 1956, after 13 years of operations.