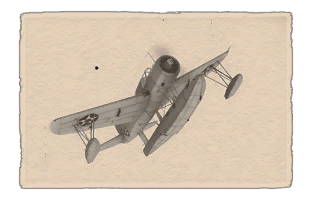 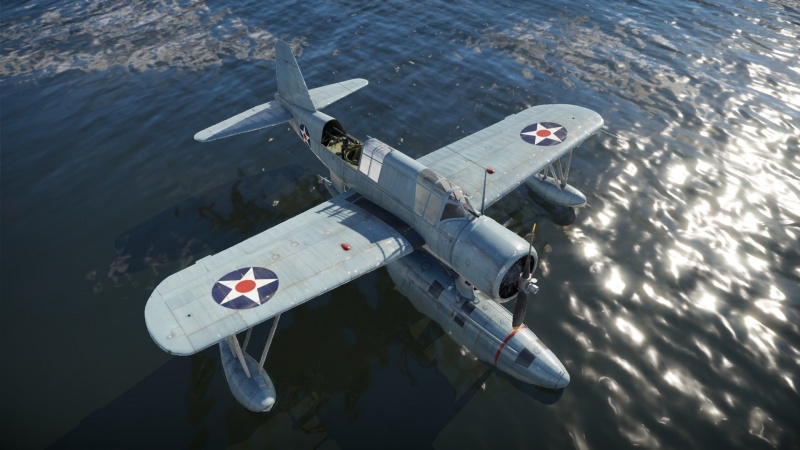 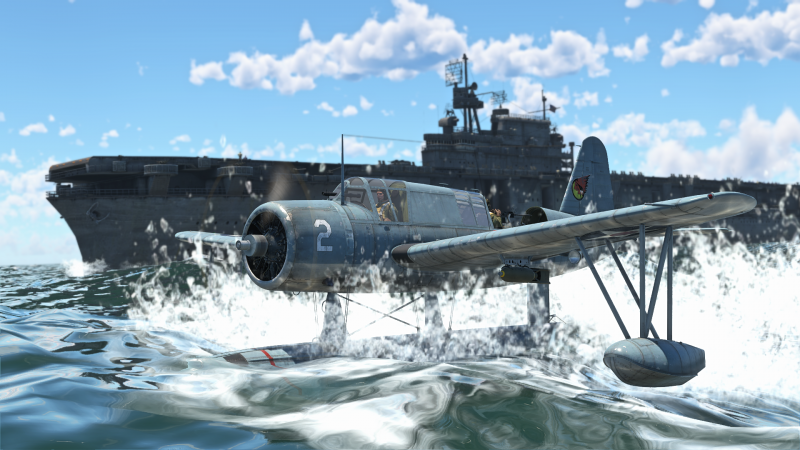 The OS2U-1 Kingfisher is a rank I American hydroplane bomber with a battle rating of 1.0 (AB/RB/SB). It has been in the game since the start of the Open Beta Test prior to Update 1.27. The OS2U-1 is the predecessor of the improved OS2U-3 Kingfisher. Beyond its position as a vehicle in the US aircraft tree, it can also be launched and flown from certain ships in naval battles as a reconnaissance aircraft.

The OS2U-1 can be outfitted with the following ordnance:

Kingfisher is classified as a bomber and as such it spawns at altitude. Primarily, it should be used in the ground attack role across all game modes. If possible, stay out of sight of the enemy and try to take indirect routes to desired targets. While the single 7.62 mm gun is capable of destroying artillery, AAA (stationary and on trucks), landing craft, and armoured cars, this is ill-advised if any enemy aircraft is nearby.

Since tanks and light pillboxes cannot be destroyed with such a small MG calibre, the player will have to resort to bombs. Cargo ships will require a single 100 lb hit on deck. It is not effective at downing planes, as even if the opponent has a level 1 pilot, it will take two direct hits to knock them out, even more if they have invested some crew points in vitality. As such, it is best to entirely avoid confrontations of any sort in the OS2U. If an opponent is approaching you from the rear, it is best to try to scare them off with the MG before they approach firing range.

Bombs will be the primary loadout in Ground realistic. A tactic is to wait for an enemy to step onto a capture point, move into position, bomb them, and fly away. Do not spend too much time on the battlefield, as the Kingfisher is vulnerable to any fire, especially the British and American SPAAs.

OS2U Kingfisher built by Vought-Sikorsky Aircraft Division was catapult-launched observation floatplane designed by Rex Beisel (a design engineer responsible for F4U Corsair). Kingfisher was assembled using a revolutionary spot welding construction which created a smooth fuselage that generated less drag. It also had a number of innovative features, such as deflector plate flaps and drooping ailerons used to create additional lift at low speeds which improved control of the plane.

OS2U-3 first flew on 17 May 1941. It was very similar to OS2U-1. The main difference from its predecessor was additional self-sealing fuel tanks in the wings and improved armour protection for the pilot. It had a 450 hp (336 kW) Pratt & Whitney R-985-AN2 engine (all Kingfishers were powered by different versions of this engine). It was armed with a 7.62 mm gun in the nose (hidden inside engine compartment) and a 7.62 mm gun in a dorsal turret on a flexible ring mount. Also, apart from 100 lb (45 kg) bombs, it was able to load 325 lb (147 kg) of depth charges. The OS2U-3 was the most produced variant with just over 1,000 units built. It was the only exported variant and it served in many countries from Uruguay to Australia including the Soviet Union aboard cruiser Murmansk (USS Milwaukee). Last of the Kingfishers were withdrawn from service on Cuba in 1959.

While some were deployed to land bases (OS2U-2 installed with wheels instead floats were mostly used for training) most of Kingfishers operated from U.S. Navy's heavy and light cruisers and battleships. The violent launch was done into the wind by catapult powered with a cannon shell. Landing required the ship to make a turn in order to create a patch of relatively calm sea surface where Kingfisher could land and then taxi to the "sled" used to pull it closer to the ship's crane which would hoist it back on deck.

In the early 1940s seaborne radar was a rarity and still primitive, the eyes and ears of a fleet of warships were limited at best. This is where the observation aircraft was imperative. A battleship would launch a Kingfisher seaplane and the aircraft could then patrol the surrounding seas for hundreds of miles for hours at a time. Depending on the threat, the Kingfisher might be looking for anything as huge as an enemy fleet or as small and deadly as a single enemy submarine. In the case of the latter, the Kingfisher had teeth of its own: even with its limited payload, Kingfishers assisted in the sinking of U-Boats U-576 and U-176. Simply finding a target or enemy fleet was of immense use to the bridge crew of a warship, but the Kingfisher could do more. Once an enemy fleet was identified it was almost inevitable that an engagement would take place – even in the 1940s, naval guns were well capable of firing shells in excess of 20 miles. The Kingfisher could fly over an enemy fleet and report directly back to the bridge crew of any warship within its own fleet, giving real-time feedback of the accuracy of shot and corrections to bring the tremendous firepower onto a target. Furthermore, the importance of naval gunfire did not stop with engaging other vessels: carrying some of the largest guns in the entire world on a mobile platform, battleships were the ultimate fire support during an amphibious assault. As US Marines fought their way from beachheads all across the Pacific theatre, the guns of the fleet were often there to eliminate concentrations of enemy troops and heavy defensive positions. Again, the Kingfisher was ideally placed to ensure this supporting fire was accurately and efficiently delivered.

Even though it was used in many different roles, as trainer, bomber, anti-submarine platform in the Atlantic, scout, naval gunfire spotter etc. the Kingfisher was most respectable for Search and Rescue missions where it was involved in saving downed airmen in the Pacific. On one occasion in 1942 over Pacific a B-17D became disoriented, ran out of fuel and ditched. After drifting for several weeks without food and water, the crew and passengers were rescued by a Kingfisher. With all the survivors on its wings, it could not take off and started taxing to the nearest island before being relieved by a torpedo boat. However, most notable rescues happened in 1944 over Guam when a Kingfisher of USS Indiana rescued two downed airmen despite being exposed to fire from several nearby Japanese artillery positions. The only confirmed kill scored with Kingfisher happened on 16 February 1945 at Iwo Jima where Lieutenant D.W. Gandy shot down a Zero fighter.