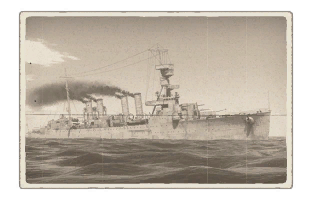 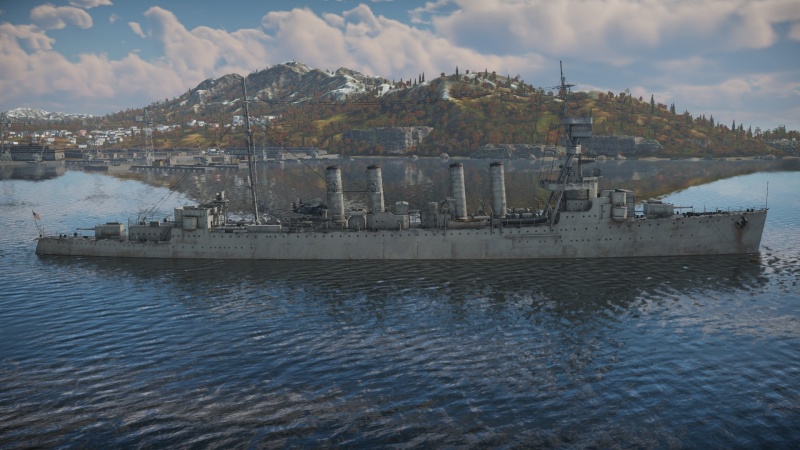 The anti-aircraft capabilities of the USS Trenton include:

The USS Trenton can be outfitted with the following torpedoes:

The Trenton is an interesting cruiser, and its gameplay requires a good understanding of the cruiser's strengths and weaknesses. The ship isn't a very beginner-friendly ship due to its low survivability (for a cruiser) and slow reload, but once mastered, it is a great way to learn the ropes of cruiser gameplay. The first thing to note with the Trenton is that its survivability is very mediocre. In fact, with low armour and just 458 crew members, the Trenton has marginally better survivability than many destroyers it has to face. Thus, it is extremely important to make use of available cover, to avoid being turned into a wreck by the many powerful cruisers that the Trenton faces regularly in battle. As well, the Trenton has a slow-reloading main gun battery with poor traverse rate - do not expect to be able to engage quickly, as the Trenton has a much slower traverse than the previous destroyers.

The Trenton is used best as a flanker, because of its low survivability. With this ship, it is critical that you make use of all cover available, as the Trenton will be destroyed extremely quickly when out in the open. At the start of every battle, look for positions where you can hide the large part of the vessel; if the map has no land cover (i.e. New Guinea or La Manche), seek the protection of teammates. The Trenton can do the most damage when it is in a position where it can engage enemy targets without a significant risk of being shot at. Do not brawl with the Trenton, especially against other cruisers! The ship's poor survivability will lead to a quick demise in any close-range brawl type engagements.

One way to increase survivability is to go head-on with the enemy - the Trenton has a strange main gun arrangement that prevents more than seven guns from firing on a broadside. However, when going bow-on, the Trenton can actually fire six guns - only one less than a full broadside! This helps increase the ship's survivability as you are harder to hit when not broadsided, without having to lose a significant portion of your firepower. Against aircraft, the Trenton's best defence is to stick with friendly destroyers or cruiser which have better anti-aircraft defence. The two 28 mm "Chicago Pianos" are dreadfully inadequate against enemy aircraft and will provide an extremely limited scope of protection.

In the early 1900s leading up to The Great War, conflicting views and opinions on cruiser design among the U.S. Navy's top brass led to not a single new vessel of this class being laid down. With the outbreak of hostilities in Europe in 1914 and the later involvement of American forces in the conflict, the U.S. Navy had every opportunity to gather the needed experience for creating a new cruiser design.

Thus, during WW1, numerous design propositions for new cruiser variants and subclasses were developed and assessed. In the end, two designs stood out from the rest; a light cruiser with a displacement of up to 8,000 tons and a heavier battlecruiser weighing up to 46,000 tons. The former of the two designs resulted in the creation of the Omaha-class light cruisers. Despite receiving the Congress' approval in 1916, the Omaha-class cruisers weren't put into production before more than two years worth of significant redesigning was done to the ship.