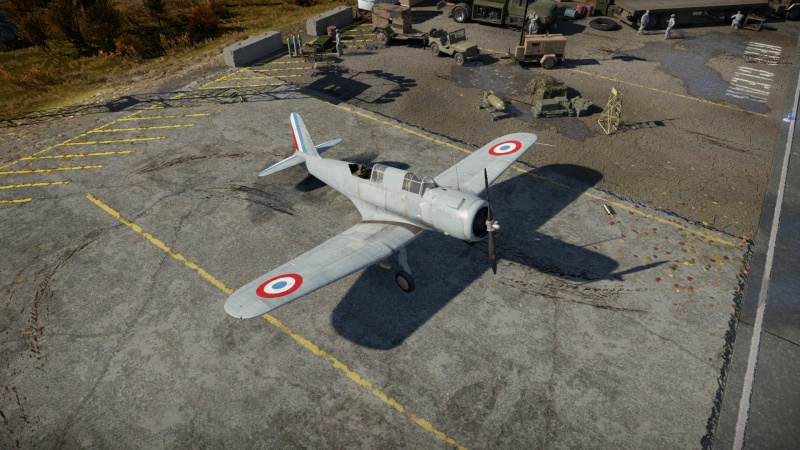 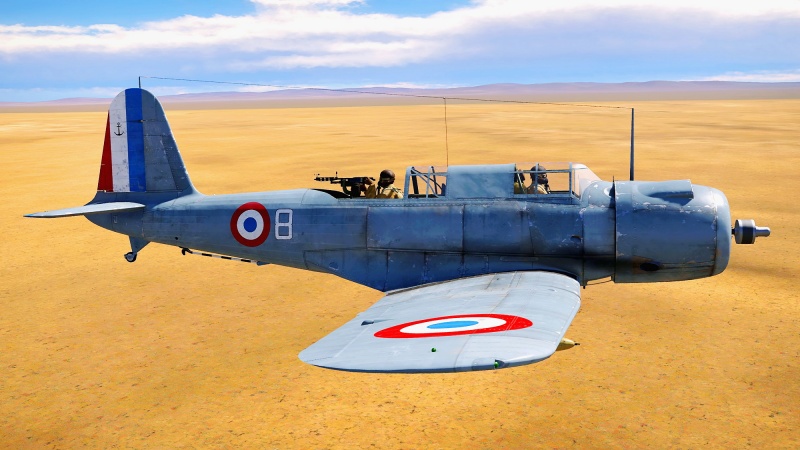 The SB2U-2 was developed in the early 1930s and was sold to the French as a V-156-F. This aircraft served on the French aircraft carrier Béarn, however at the outbreak of the war, the carrier was deemed too slow for service and both squadrons of V-156-F aircraft were transferred to land-based duty. The V-156-F was used continually until the French Armistice.

This aircraft is a fairly slow aircraft, but sturdy. Built as a dive-bomber, it excels at diving down above a target to release its bombs. The V-156-F is one of the only early aircraft in War Thunder which features dive brakes (key-bound to 'H' by default) to aid in slowing down during a dive, thereby helping prevent the ripping off of the wings in RB and SB. The V-156-F differs from its American siblings (SB2U-2/-3) in that it has additional air brakes mounted on the upper and lower surfaces of the wings which extend 90 degrees to the wing when utilized. Wing mounted machine guns allow for this aircraft to strafe softer ground or water targets while waiting for bombs to reload (AB). The rear-facing dorsal gunner helps to ward off enemy attackers, however it is not a game changer for this aircraft.

Similar to its American and British counterparts, the V-156-F suffers from rather abysmal flight characteristics. It has a mediocre top speed of ~300 km/h at sea level stock, and slightly higher once spaded. However, the aircraft's main performance problem is its lack of engine power. The poor engine power output results in a terrible climb rate and almost-nonexistent acceleration. This means that the plane is realistically limited to terrain-hugging bombing runs as the plane will take half the match to climb to bombing altitude. As well, the engine overheats quite quickly when applying WEP meaning that the maximum throttle setting should not be used too often.

The aircraft's manoeuvring characteristics are also lacking, but have a few quirks. The plane has a poor turn rate at low speeds (<250 km/h) but can turn very quickly when travelling at higher speeds - in fact, it may be able to out-turn some fighters when entering the turn at 300-350 km/h. However, it cannot continuously turn at that rate, as its poor energy retention results in it bleeding speed quite quickly. The plane's flight controls are quite responsive, but will suffer from significant buffeting and lock-up past 550 km/h.

The V-156-F can be outfitted with the following ordnance:

The V-156-F is a slow aircraft which leads it to having two options. The first is to hug the terrain. While flying to your target of choice (AAA sites, AA Vehicles or bases), fly along the terrain, utilize what hills and valleys there are to fly through. Time on target may be limited before the enemy gets there so line up your bombing run and drop bombs. This aircraft can manoeuvre fairly well, utilizing elevator and rudder controls and a nice turn time (upgraded) of 22 seconds (RB), you can quickly flip this aircraft around and return to ground attacking targets you just flew over.

The second option will be to gain altitude. Going too high will render your bombs ineffective. The idea here is to gain several thousand feet, fly towards your target of choice and then dive on it. During your dive, your aircraft will build up speed, to prevent too much speed build up and control stiffening, reduce your throttle and engage dive brakes (h). This will allow you a controlled descent and the ability to line up your target easier, the unfortunate downside is that now you are slowly moving in a straight line, an easy target for enemy fighters. Once you swoop on your target and release your bombs, engage full throttle and retract dive brakes.

Although this aircraft is slow, it can be utilized to attack fighters if in a pinch. The manoeuvrability of this aircraft along with its slow speed can aid in forcing an attacking enemy to overshoot or underestimate the capabilities of this aircraft.

The V-156-F had its origins in a French variant of the American Vought SB2U Vindicator carrier-based dive bomber. The aircraft was intended to operate as a naval dive bomber off of the French aircraft carrier Béarn. The aircraft underwent a series of major modifications before entering service with the French - the airbrakes were changed to include outerwing split brake flaps, the avionics were replaced with French versions, and the armament was changed to consist of French Mle 1923 machine guns. The aircraft also had its "bomb crutch" bomb displacement system removed due to security reasons, and was replaced by French Alkan bomb sets.

The French government ordered two batches of 20 aircraft for the Aéronavale, which were delivered by late 1939. The aircraft were shipped via Canada to avoid being embargoed due to the US Neutrality act. The first of these aircraft formed Escadrille AB1, the first squadron to operate from the aircraft carrier Béarn. When the old carrier was deemed too obsolete for active service, the aircraft were moved ashore and served as land-based bombers.

In November of 1939, the aircraft started making regular air patrols over the English Channel. Its first combat action occured in early 1940 when French V-156s were ordered to bomb a number of vital bridges in northern France. The aircraft managed to do significant damage despite the fact that the pilots hadn't been trained in ground attack; however, 5 aircraft were lost when Bf-109Es intercepted the bomber formation. The aircraft also assisted in the Dunkirk evacuations, and sank an Italian submarine. However, their success was rather short-lived, as the many of the aircraft were shot down; by the time of the French Armstice in June of 1940, only a few aircraft remained.