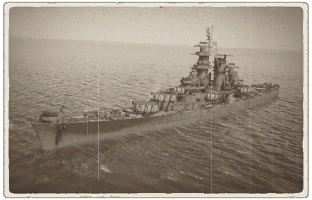 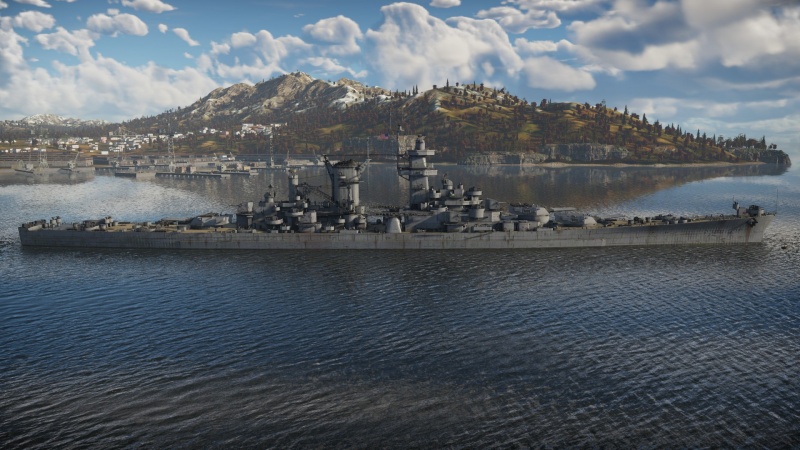 The Alaska-class, USS Alaska (CB-1), 1944 is a rank V American battlecruiser with a battle rating of 7.0 (AB/RB/SB). It was introduced in Update "Drone Age".

The Alaska-class were major warships envisioned as a counter to the rumours of super-/battlecruisers under construction by the Imperial Japanese Navy, and so the Alaska-class was designed to be able to eliminate any possible cruiser and the rumoured small battlecruisers in a gunfight whilst having the speed to evade all but the fastest of battleships. As it turned out, the speculated Japanese warships were never even built and the Alaska-class never saw surface action against other warships, only taking part in escort and shore bombardment missions.

People in favour of calling them battlecruisers argue that the origin of the design as a cruiser has no relevance on its combat capability, which far exceeds any conventional cruiser and is more in line with other capital ships. They argue that the large cruiser classification was invented purely for the Alaska-class and no other navy has used it because there is no need for it when the battlecruiser classification already exists, and that warships can often have misleading official classifications, such as the modern Japanese Izumo-class destroyers. They postulate that the theme of battlecruisers having contemporary battleship guns is just a trend, not a rule, as displayed by the in-game Kronshtadt, an extremely similar vessel to Alaska and yet everyone agrees that the Kronshtadt-class were battlecruisers.

Post war, and like the battlecruiser concept in general, they were viewed as obsolete due to being too combat ineffective compared to and against modern battleships while being seen as too resource and cost inefficient compared to cruisers. There was some thought given to converting them to missile ships but these plans fell through and, by the early 1960s, they were broken up for scrap. 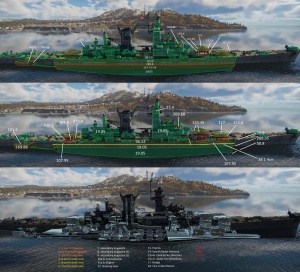 3 х Turret3 x 12-inch/50 Mark 8 cannon
Ammunition480 rounds
Vertical guidance-3° / 45°
Main article: 12-inch/50 Mark 8 (305 mm)
The main armament of the Alaska is composed of a total of 9x 305mm 50-calibre cannons, arranged in three triple turrets with two superfiring fore and one aft. The gun handling is not slow, but not especially fast for the size of the turrets. The maximum reload speed is quite competitive at 20 seconds, though most players of the ship won't have a top level crew and thus will have a somewhat slower reload.

The Alaska has access to two shell types for the main guns.

The armour-piercing shell is the main one you'll use for opposing capital ships and occasionally on cruisers that may have a lot of armour or are angled. The AP shell of the Alaska was designed as a so called 'super-heavy' shell, which means that it has a lot bit more mass than a normal AP shell. This means the shell has less muzzle velocity, intended to give the shells a sharper descent angle when coming down on an opposing vessel, a little like a mortar, with the hopes of going through deck armour, which tends to be relatively thin.

The problem with this is that the US didn't realise that the range needed to have the shells drop at a flat enough angle on the deck to effectively penetrate most deck armour was quite a bit further than you could physically aim with any real accuracy. Even ignoring that, warships in naval battles tend to always want to close the range anyway in order to be able to aim accurately and/or use torpedoes, which would rapidly diminish the possibility of penetrating deck armour. What this means is that you simply cannot use the shells for their intended purpose of hitting deck armour, meanwhile the lower muzzle velocity makes aiming your AP shells more difficult and shells hitting the side of an enemy vessel are at a sharper angle than they would otherwise have been, which makes it unnecessarily harder to penetrate enemy side armour. Not only that but, as is typical for US warships, the AP shell has a relatively poor bursting charge of less than 8kg. The only thing that saves the shell from being completely useless is the relatively high penetration statistics with it retaining a more than moderate level of penetration at range due to the heavy shells momentum.

The HE shell of the Alaska is a more normal naval shell and the 35kg of explosive power is fairly decent for its calibre. Although it's not too competitive compared to the real hard hitting HE shells at top tier naval, this shell will still enable you effectively dispatch lightly armoured vessels such as destroyers and small cruisers without difficulty, as well as being able to harass anything on the deck of opposing capital ships.

Located midships are two catapults with one OS2U-1 scout plane each which provide unique offensive and defensive abilities, expanding tactical options. Ship-launched scout planes fly just like regular tree units but lack munition choices and cockpit views. Alongside the typical abilities of strafing, dropping 2 x 100 lb bombs, and capping zones, the OS2U-1 and other scout planes have the added ability to lay down smoke cover (up to 3 times). Captains will be wise to remember to utilize the aircraft and consider when best to use it, for example to cap a point early or late in the match, to create a smoke screen to stymie enemy bombardment and repair, to attack enemy units directly, or perhaps something completely new! With two scout planes one can risk a cap attempt at the beginning of the match, saving the second for any opportunity that presents itself.

Alaska is a versatile warrior capable of achieving multiple objectives. However, its generally unwise to spawn Alaska as your first ship (unless you are in a tight squad) and here are the main reasons: First, you have to face the most intense early-game combat and may not spare focus to do multi-tasking. Second, Alaska's low damage output won't help you and your teammate win the early fight. Third, Alaska is tanky indeed but to absorb damage in this ship is the least optimal use and Arizona suits this role much better than her.

After securing the early game, you may spawn Alaska as your second ship and pursue for the mid-late game. Depending on the situation, you may chase down weakened opposing capital ships; sail straight towards one objective and secure the others with your floatplane; repel air raid and deny irregular motorboat tactics with your powerful autocannon arrays. Eventually, you will claim a victory in this ship.