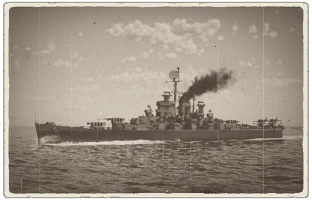 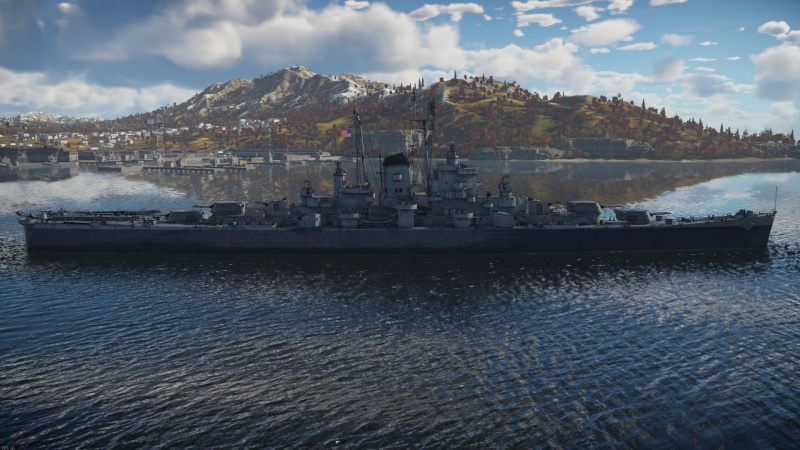 The Fargo-class light cruisers were the final class of light cruisers built for the US Navy in WW2. USS Fargo is the latest light cruiser in the American tree, both in launch date and refit, and is very similar to the preceding USS Cleveland, with similar armour, mobility and firepower. The major difference between the two classes is a simplified funnel and superstructure structure on the Fargo, providing better lines of fire for the secondary and anti-aircraft battery.

The Fargo class, as a later evolution of the Cleveland-class light cruiser, has a very similar armour layout to the earlier USS Cleveland. USS Fargo is well armoured for a light cruiser, with a 5-inch plate angled at 7° to increase effectiveness. This plate, though thin, covers the area from the waterline to the top of the machinery spaces and is resistant to 6-inch fire at typical engagement ranges, and is almost immune to 5-inch fire from nearly all ranges. Below the waterline this drops to a 3.25-inch plate, with fuel tanks behind to absorb any shells which manage to pierce the armour below the waterline.

The armoured deck covering the machinery spaces and citadel has a thickness of 2 inches, as well as the sides of the citadel below the waterline. The turrets are well armoured for a light cruiser, with a face of 6.5 inches angled at 27° making it effective against 6-inch and lower calibre guns, with the possibility of deflecting some 8-inch shells at long ranges. The sides and top of the turrets have 3 inches of armour, and the rear only 1.5 inches. It is recommended to keep the rear of the turrets hidden, as even the 40 mm Bofors can penetrate the rear at close ranges. The turret barbettes have 6 inches of armour, and these lead all the way down to the magazines.

The magazines are placed far down in the ship well below the waterline, above fuel tanks in the bow and between them in the stern. These are very unlikely to be hit by enemy shells in these positions, but captains should be vigilant in preventing a torpedo strike in these two areas, as any torpedo hit will easily be fatal to the ship, especially in the bow with no fuel tanks to cushion the blast on either side.

The USS Fargo makes a top speed of 32.4 kn once upgraded, the same as the earlier USS Cleveland. As with other American cruisers, this gives Fargo the capability to take objectives and crucial areas of the map that slower cruisers, and of course battleships, may not be capable of. It takes approximately 38 seconds to reach flank speed, and Fargo will halt from flank in roughly 1 minute. The rudder takes about 2 seconds to respond, and as Fargo uses a single rudder design, the turning circle is fairly wide. Captains are advised to avoid terrain where sharp turns are necessary, as USS Fargo may be unable to perform such manoeuvres without running aground. Speed will fall to 23 kn in a sustained turn; this will make Fargo a much easier target and captains are advised to avoid prolonged, aggressive manoeuvres as this will drain vital speed.

USS Fargo has 12 x 6-inch guns as her main battery, split into 4 x triple turrets, mounted 2 fore and 2 aft. The gun mounts have a horizontal targeting speed of 10° per second, which is very quick for a cruiser and better even than some destroyers. This gives Fargo quick reaction times against unexpected threats and allows her to perform well in close quarters engagements. The reload time is excellent at 6 seconds with an aced crew, like other American 6-inch armed ships like the preceding USS Cleveland. This fast reload rate allows Fargo to quickly send large quantities of shells downrange from her main battery.

The HE round Mk.34 HC serves as the stock round for the USS Fargo, and the high filler of 5.88 kg TNTeq will do appreciable damage, especially in the high quantities the fast fire rate and plentiful guns allow. This shell will easily dispatch destroyers and lightly-armoured light cruisers, but begins to have a more difficult time against late war light cruisers with improved armour and of course, heavy cruisers and battleships. Against capital ships the shell will be ineffective, but capable of destroying AA and secondary mounts and setting fire to the superstructure. The HE round Mk.34 HC (base fuse) and the HE-VT round Mk.34 HC-VT are the same shell but with different fuses, hence the names.

The Mk.34 HC (base fuse) has the fuse at the bottom of the shell instead of in the nose, which allows it to penetrate into the armour before exploding. This gives it a small amount of extra penetration with the same filler. The Mk.34 HC-VT has a proximity fuse, allowing it to detonate when close to enemy aircraft and serve as long range AA fire to supplement the AA battery. This is the primary HE round recommended for use, as it functions identically to the normal Mk.34 shell while being able to destroy aircraft, and the slight extra penetration of the base fuse shell is not typically helpful.

The final shell is the APCBC round Mk.35 AP, the primary shell for use against more heavily-armoured targets like the Prinz Eugen which are commonly seen. The shell has good penetration, but is slightly lacking in filler for its calibre. This is made up for with the heavy volumes of fire the quick reload rate allows, and captains can expect quick damage to internal components and crew, oftentimes leaving enemy captains with little or no time to retaliate if caught off guard. It is recommended to aim for magazines if possible due to the low quantities of filler in the shells, though it's not a major concern with the sufficient rate of fire.

USS Fargo's secondary battery consists of 12 x 5-inch/38 guns, mounted in 6 twin turrets. These are positioned with one each fore and aft of the superstructure, and 4 more positioned in wing-mounted pairs, port and starboard of the bridge and superstructure. This gives an 8 gun broadside for the secondary battery, with the full 12 being available only for enemy aircraft high above the ship. These guns will already be familiar to captains, as they make up the primary battery of most destroyers in the American bluewater fleet. The guns have excellent rate of fire and high traverse speeds, and as they are designed to be dual purpose, they work well against both air and surface targets.

The AAC Mk.34 serves as the stock shell, a basic HE shell with 3.22 kg TNTe. This will work well against vessels with little or no armour such as early destroyers or PT boats, but for high rank destroyers and cruisers, the SP Common is recommended. The SP Common shell works well against destroyers and light cruisers, being able to penetrate their armour at battle range and the 906.5 g TNTe will do appreciable damage upon penetration. The final shell is the Mk.31 AAVT shell, with the same filler as the HE shell but with a proximity fuse. This is the multipurpose shell of choice, as it is both excellent for destroying aircraft, with a 23 m trigger radius, and performs identically to the HE shell against lightly armoured targets. It is recommended for captains of USS Fargo to run a mixture of AAVT and SP Common shells to allow for rapid response to differing threats.