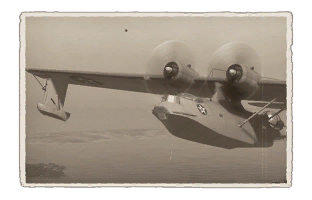 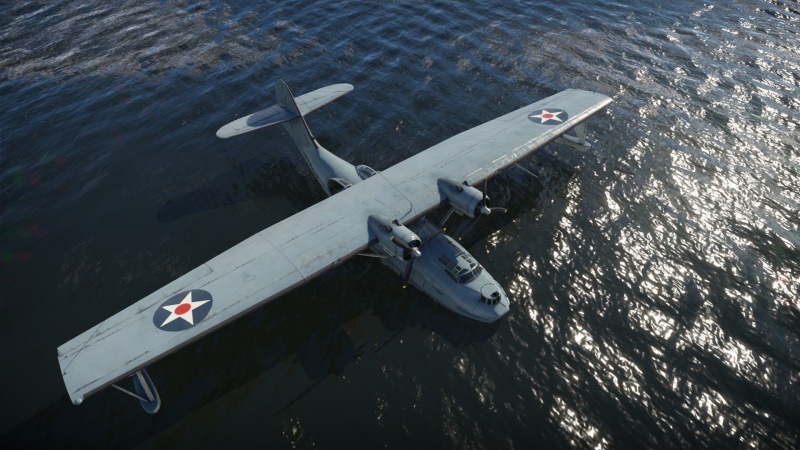 The plane is overall good but, when using it in air arcade or custom, it was easy to get shot down even with the AI gunners on the side protecting you. When bombing with it, you will get 16 100 lb (pounds) bombs. The first module unlock is the 100 lb bombs. Beyond that, you can research torpedoes weighing 2216 lbs and are very effective against long boats and ships in general. One torpedo is often enough to sink pretty much anything in the game save AI carriers which require two. Also there are two more unlockable bomb loadouts. In order to get the 1000 lb bomb, you need to get the improved torpedo, and once your done with that you can research it, with the 1000 lb bomb you can destroy 3 tanks at once, possibly even more if it lands in the center of a cluster of enemy tanks. You can also attach 500 lb bombs but they are only limited to four bombs, same with the 1000 lb bombs. The PBY-5 is easy to get shot down or burnt down because it is slow, and most fighter planes could take it down easily, so just stay at high altitude. Overall, it is hard to bomb without getting shot from AAA's or other planes but a fairly decent starter bomber.

The PBY-5 Catalina can be outfitted with the following ordnance:

The PBY-5 Catalina is defended by:

The plane is quite unmanageable, and its wings are very weak, being able to snap just by turning just a little too tight at higher speeds in a Realistic Battle. It's also a huge target. Its lack of landing gear means that extra caution should be taken when landing, as it must land on its belly to rearm in a Realistic Battle.

Although the PBY-5 Catalina is slow and clunky, it offers a heavy payload that is sure to be a game changer if used properly. One of the bomber's biggest cons is its lack of landing gear, although it can still belly land onto airstrips. It also has a very good defensive armament for its tier, which can occasionally be a saviour against an enemy fighter.

The armament on the PBY-5 Catalina is what makes up for its clunky movement. The plane is capable of carrying a heavy payload of bombs or torpedoes and has defensive gunners on all sides. The two side gunners have .50 cal machine guns, making it more than capable of destroying enemy aircraft that stay within their range.

Produced from the 1930's to the 1940's by Consolidated Aircraft, the PBY-5 was one of the most widely produced (a total of 3,282 were built) and used seaplanes of World War II. During its service lifetime, it was found and operated in every branch of the United States Armed Forces.

Before the start of the war many aviation critics and engineers considered the flying boat obsolete due to its slow speed, its max being 189, but despite this its two big selling points were its amazing range about 2,990 miles (4811.939 kilometres) and durability. Earlier versions of the Catalina were true flying boats and could only land on water. Pilots needing to ground their plane in emergencies could land on water and beach the aircraft. To prevent this unnecessary damage, Consolidated designed and first flew the PBY-5a in 1939 with a retractable landing gear mounted directly between the 2 support beams underneath the wings. With this new ability to land on land it allowed the Catalina to become ERS or Emergency Rescue Squadrons with the role of airlifting stranded bomber crews such as those from a downed B-29-A-BN.

After the war, peacetime Catalina's were converted to civilian use whether it be casual flying or emergency duties such as firefighting. It lives on in game the same as it did in battle, being very slow but carrying a great number of armaments which represents its many roles it played in World War II and at its Battle Rating able to take a great number of hits before finally getting shot down.