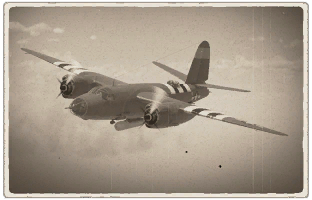 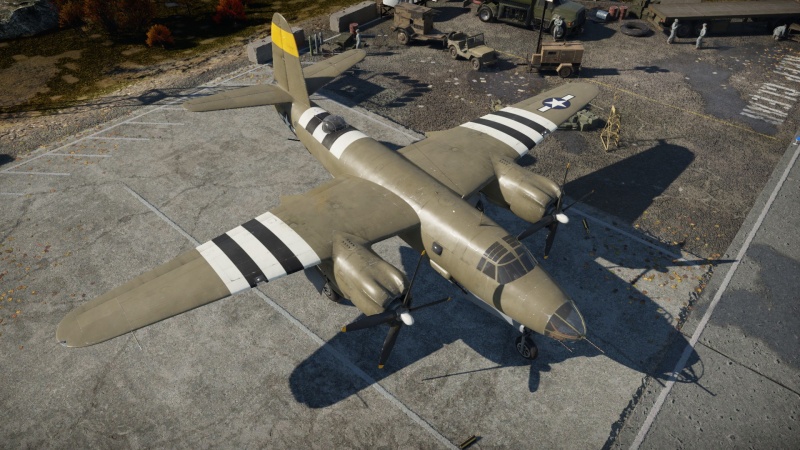 There is basically no protection from the front for the flight crew, so while your offensive battery of five forward-firing M2 Brownings might make head-on attacks tempting, your pilots are shockingly vulnerable from that angle.

The four large self-sealing fuel tanks in the wings are relatively easy targets for enemy fighters, and your engines are also an easy target. To make matters worse, the B-26 had a reputation for being very challenging to keep in the air with only one engine. While the Marauder is often able to absorb a considerable amount of punishment, it is unlikely you'll make it alive back to base. Use your speed to keep pursuing fighters on your tail, where your relatively well protected defensive gunners can discourage pursuit.

The B-26B can be outfitted with the following ordnance:

The Martin B-26 medium bomber was submitted by the Glenn L. Martin company in 1939 to the same USAAC specification (Circular Proposal 39-640) as the North American B-25 Mitchell, and both were accepted off the drawing board. Unsurprisingly, the two airplanes share much in common: twin-engined medium bombers, similar in size, with similar offensive and defensive armament. Both saw service in all major theaters of the war, with both U.S. and allied forces.

What sets the B-26 Marauder apart is that it was designed for speed; designed around two massively powerful Pratt & Whitney R-2800 radial engines, its maximum speed is a full 10% faster than its slightly smaller and lighter B-25 counterpart. However, this speed came at a cost. With high wing loading and demanding flight characteristics, the B-26 was noticeably harder to fly than the Mitchell. This pilot skill differential, combined with the pressures of wartime training, led to a track record of deadly crashes early in the plane’s history, gaining a reputation as a "widow maker".

Despite this unpromising start to its career, the B-26 Marauder racked up a solid combat record. Mostly deployed at medium altitude missions, it became known for accurate bombing, and by the end of the war, the U.S. 9th Air Force reported that the so-called "widow maker" recorded the lowest combat loss rate of any aircraft type.[1] One B-26, named "Flak Bait", survived over 200 missions and is on display at the Smithsonian Institution's Steven F. Udvar-Hazy Center.[2]

Although most of its combat flying was done in the European Theater of Operations, a notable early engagement in the Pacific was the sortie of four torpedo-equipped Marauders against the Japanese fleet during the Battle of Midway. None of the torpedoes hit, two of the planes were lost, and the other two returned so badly shot-up that they were written off. Over the fleet and pursued by Japanese A6M Zeroes, a B-26 named "Susie Q" actually overflew the length of the Akagi’s flight deck at very low level, strafing the deck crew with its machine guns. Susie Q landed, just barely, back at Midway with over 500 bullet holes.[3]

The in-game version represents the B-26B model after some modifications had been made, including lengthening the wings to improve (but not eliminate) the tricky handling characteristics. Most B-26 were built at the Glenn L. Martin plant in Baltimore, Maryland, but the essentially identical B-26C (found in the French tech tree) was built in Omaha, Nebraska. A total of 5,288 aircraft of all models were built between 1941 and 1945.[4]