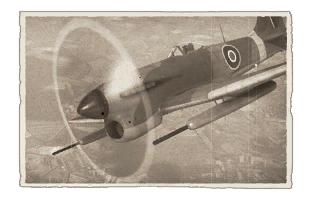 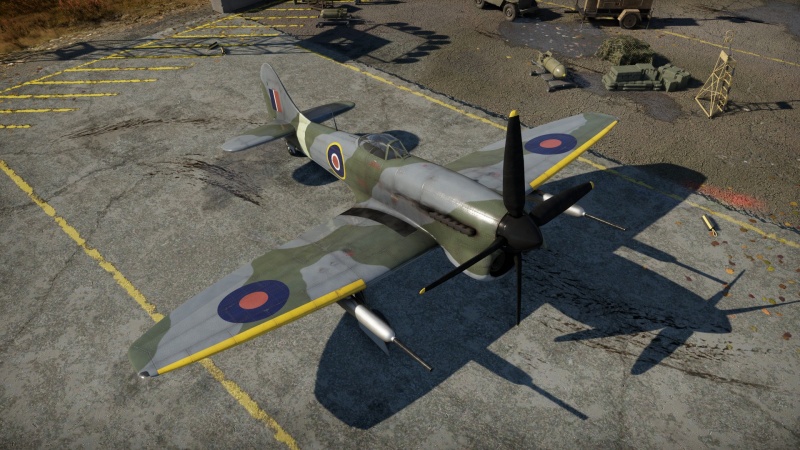 The Tempest Mk V (Vickers P) is armed with:

This plane with its 2 x 47 mm cannons on each side with only armour piercing ammo (by default) with no other armament is clearly made for the ground attack role. It's definitely not a fighter as the heavy cannons make it very hard to manoeuvre, but once fully modified it has the ability to be the most unstoppable plane in its role. The Tempest Vickers Mk V equipped with the Vickers 47 mm cannons is an absolute tank buster when used correctly. Engaging enemy planes should only be done when they are distracted, and make sure to keep your speed high so that you can disengage by running away.

The Tempest can easily take out any light, medium, and most heavy tanks when the attack is made from the correct angle. You can hit light tanks from any angle, medium tanks from side or rear and you want to take the heavies from the rear. Light pillboxes are also easily destroyed. In addition, the 76 rounds you get may not sound like a lot, but trust me you will find it more than enough more time than most.

The best defence of the Tempest Vickers P is its speed. Almost all of the planes it will face will not be able to match its level flight speed. However, stay alert for enemy planes, because if they come out of a dive, they will be able to catch up to you. If you spot an enemy plane in the distance, start running to friendly aircraft before the enemy gets too close. In a dive, the Tempest can easily reach speeds of close to 800 kph. In level flight, you will slowly reach about 620 kph using WEP, and 590 kph without it (note that these speeds are at sea level). The Tempest will lose a lot of energy in turns, so try to make smooth manoeuvres. Finally, your water and oil will start to overheat after prolonged use of WEP. Going to 100% power will cool your plane down again.

The Tempest Vickers P was a concept plane designed due to the lacking ability of the 40 mm armed hurricane IID in destroying Tiger 1 tanks in North Africa, The air staff put out an issue in 1942 for a 47 mm airborne anti-tank gun which would fire a 4 lb 9oz (2.07kg) solid AP shot at 2,650 fps (808 m/s) with a rate of fire no less than 60 rounds a minute.

Vickers was contracted to make the rounds, case piece was 326 mm long, the rim diameter at 59.7 mm with the body diameter at 52.3 mm, the shot was typical of most other British rounds of the time, solid AP shot with no HE filler, overall with the shot fitted the round was 474 mm long.

The gun itself was in contest by three firms of the time, Vickers, Rolls-Royce and the war office design department, the project was known as the "class P gun" as such the competing designs were known as PV (Vickers) PR (Rolls-Royce) PC (for the Chief superintendent of armament design in the war office).

Complete information about the three projects does not appear to have survived. The PR gun was designed with two different barrel lengths, a 70-calibre barrel (with which the muzzle velocity was calculated to be 2,675 fps or 815 m/s) which was about 4.3 m long overall, and a 52-calibre version. The gun was belt-fed and used a long-recoil design; the weapon recoiled 66 cm on firing, generating a peak recoil of just over 2,000 kg. The PC gun weighed 250-270 kg and recoiled only 30 cm, thereby generating a stronger peak recoil of 3,560 kg. This was magazine fed with two alternative designs; a 30-round flat box lying across the gun's body, and a 34-36 round drum wrapped around the rear of the gun. Overall length was 4.5-4.7 m respectively. No information is recorded about the PV gun.

The PV and PC guns were made but were not ready for firing until close to the end of the war. The PR gun was cancelled before completion during the war when Rolls-Royce was directed to cease work on guns. None of the Class P guns proceeded beyond the prototype stage. However a Tempest V was fitted with two of the Vickers guns in under-wing pods just after the war, but no records have been found concerning this installation.

The Hawker Tempest Mk.V equipped with Vickers P guns was an experimental ground attack and strike aircraft developed for the RAF. The concept involved taking the new Tempest Mk.V and adding the 47mm P gun in a long pod beneath each wing. The Vickers P gun was itself a development of the earlier 40mm Vickers S gun which had been used successfully by the Hawker Hurricane MkIID. However, the introduction of the Panzer VI Tiger tank into the North African theatre highlighted the limitations of the Vickers S gun, resulting in the need for a new, more potent anti-tank weapon. Three designs competed against each other, all in 47mm: Rolls-Royce, Vickers and the War Office Design Department. Rolls-Royce were directed to concentrate their efforts elsewhere leaving only two competing designs, neither of which was ready before the end of the Second World War. Very little information has survived regarding either design, although at least one photograph has been found showing the Vickers P gun fitted in a long pod beneath each wing of a Hawker Tempest V. What little test data has been discovered shows that the P gun had a muzzle energy well in excess of both the British 2 and 3 pounder guns and would have been a formidable weapon.