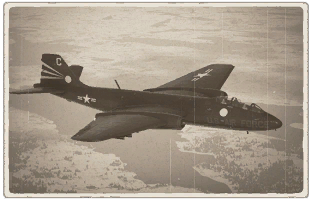 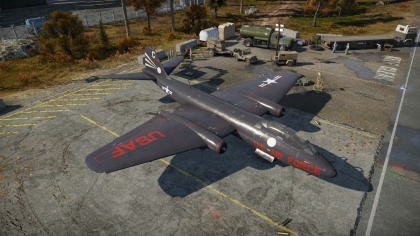 B-57A players will rejoice upon unlocking the B-57B, as it is an improvement in almost every way, with actual armament, better turn time, better payloads (including rockets), and a bearable max repair cost.

The B-57B can be outfitted with the following ordnance:

By comparison to its contemporary jet attack-bombers of other nations, the IL-28, Arado 234 C-3, Canberra B (I) Mk 6 and R2Y2 series, the B-57B can carry the largest payload thanks to its external stores, making this the ideal choice for players who prefer more aggressive and direct attack roles in the skies.

The Martin B-57B was a development of the licence-built version of the British Canberra B Mk 2, the B-57A. After its impressive performances at the Farnborough airshows in the early 1950s, the United States of America were keen to acquire the record setting jet bomber to fulfil the role of fast attacker similar to their current A-26 model. America had no suitable replacements for the Invader's position and experiences in Korea had proven the value of an Interdiction attacker.

As such, licence production of the Canberra was given by English Electric to Martin for the B-57A. Whilst the A model was essentially the same as the British variant, the B model had numerous improvements and changes over the A model that distinguishes it from the original Canberra design. Features such as a redesigned canopy that required 2 crew rather than 3, newer engines, improved wing strength coupled with pylons for large external stores, more effective airbrakes and the Martin's reduced drag rotary bomb bay from previous test aircraft were all included into the B model. As well as this, the B-57B also had offensive armament in the form of 8 Browning M3 machine guns with 4 in each wing, however, this was later updated to 4 x 20 mm M39 cannon.