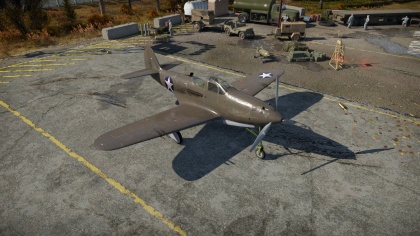 The P-39 Airacobra was a single-engine fighter used in the Pacific and Eastern fonts. The aircraft was produced 1940 – May 1944, and its first flight was 6 April 1938. The manufacturer of this aircraft was Bell Aircraft. As mentioned before in the intro this aircraft is great in low attitude combat making it useful in naval battles for escorting torpedo bombers. The original idea for the Airacobra was a defensive interceptor which would protect American shores for the axis powers. Destroying low flying torpedo and normal bombers was a wet dream for this aircraft has it could easily ripe the wings and tail. The plane originally was sent to Britain but has aircraft became more powerful and dogfights where happening higher and higher in the atmosphere and it was sent back to the states. The US then gave the P-39 Airacobra to the Aussies and was used to patrol the northern shores of Australia. The aircraft later was fitted with bombs and more cannons forcing it into a ground pounding role has it could now pen some tanks of the 1939-1942 era. Today P-39 Airacobra can be found in the Air force museum and others around the world.