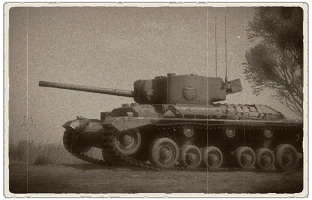 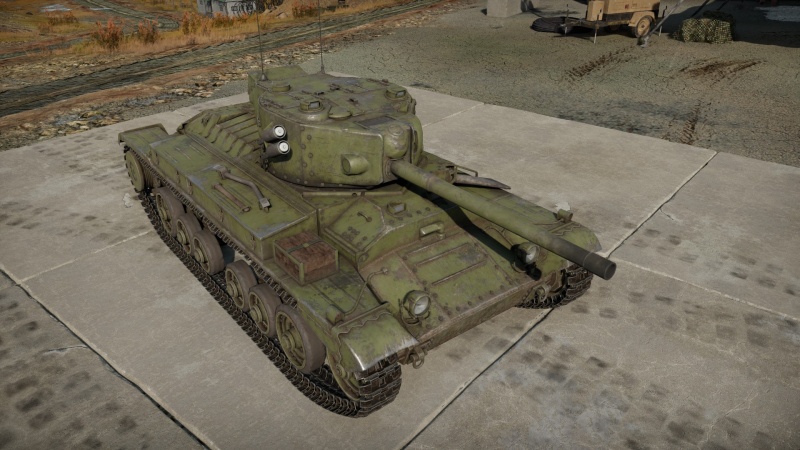 The armour on the MK-IX "Valentine" is quite mediocre head on, but slightly above par when angled. The maximum base armour thickness of the hull is 60 mm and is laid out flat on the designs, while the sloping portions are of thinner 30 mm armour plates. This gives an average thickness of ~60 mm of armour when facing the MK-IX "Valentine" flat from the front. However if angled, the armour has an effective thickness of 80mm, as such this is heavillty advised. The turret is more well protected than the hull, with its front armoured with 65 mm armour plates and sloped with its circular shape, but the cast construction of the gun mantlet can lead to some enemies attacking the gun breech to disable the Valentine's firepower, if they do not aim for the hull directly.

The mediocre armour construction means that there will be multiple types of enemies the MK-IX "Valentine" can encounter that can easily penetrate through the armour, especially if the opponent is firing at a close range and have a good knowledge on the MK-IX "Valentine"'s weak spots. These armour vulnerabilities adds up with the Valentine's fault of not being a particularly fast vehicle. This means any exposure from cover can be a long one that enemies can take the time to line up their next shot towards an armours weak point.

The Valentines biggest advantage when it comes to survival is its small size. Because of this, the majority of enemies will have difficulties hitting your weakspots and penning you at medium and long ranges. At close range this advantage is largelly nullified and the enemy can easilly shoot the exposed 30mm thick driver's hatches. even if you are angled.

The 57 mm 6pdr OQF Mk.III is a potent gun at it's BR. Although it lacks explosive filler, due to the high pen of most rounds and the quick reload (especially compared to other Russian tanks) you will be able to pen most enemies frontally. It is advised to bring more ammo than expected as you will take a few shots to completely destroy an enemy. Since the ammo is largely stored in the same place, the exact number of shells you bring doesnt matter.

One must use the Valentine wisely to not expose it too long in the open when traveling to the objective; make the most of any cover available, which will be easy due to it's small size. It is in these periods that the Valentine is most vulnerable to a concealed enemy a distance away taking a shot at the Valentine's armour straight at the front or from the sides. Angling the armour during movement through contested areas is a must as the flat surfaces present easy weak points for any frontal enemy to attack at, and the guns at this rank are more than likely to penetrate even at slightly angled armour plates. **Always angle**. Whether uptiered or downtiered, the main concerning enemy unit are tank destroyers, as their guns have a high chance of penetrating the Valentine's armour no matter how the vehicle is angled.

Once a position is taken however, the Valentine can plant itself securely at the location at suitable firing positions and make use of the fast-firing and potent 57 mm gun to take out any enemy assault units. The green paint on the Valentine can assist in concealment on foliage-rich environment for a good ambush position. Whether from behind cover or a hull-down position, the Valentine can end up victorious in an engagement if it hits with the first shot. However, due to the poor mobility, the Valentine's movement is restricted. This means it is important to make sure the enemy's ability to fire back and/or move is knocked out in the first shot so it is not required to retreat back into cover during the brief reloading period, then out again to fire, especially since that whole manouvre can take more time than simply reloading in place while exposing the tank to return fire. The poor mobility also means the Valentine needs to be aware of any flanking vehicles coming up, as the Valentine would not be able to react fast enough to the new threat.