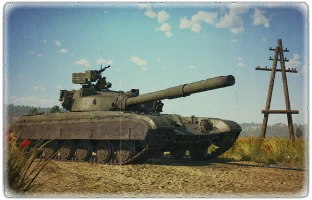 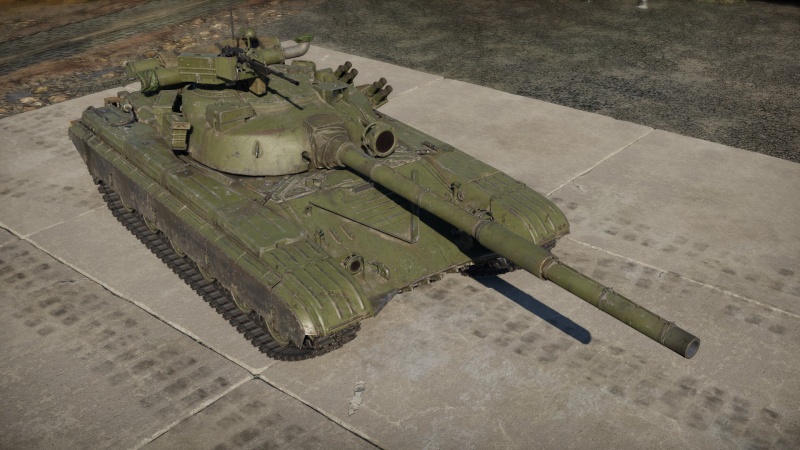 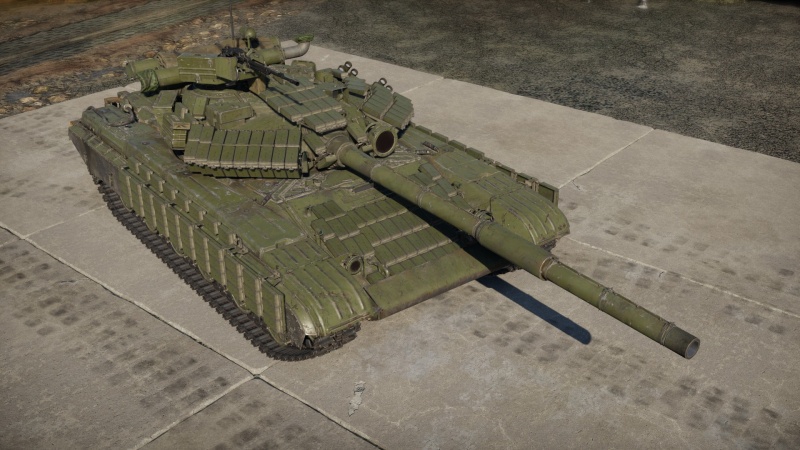 The T-64B is a fearsome opponent on the battlefield that improves on the infamy of its older brother, the T-64A. Its triple-layer composite armour is capable of shrugging off hits from most of the other top rank cannons, however its lacklustre engine power can prove a little underwhelming in the face of the turbine engines and hugely powerful turbo diesels the vehicles it competes against sport. The 125mm 2A46M-1 "Sprut" cannon comes with ammunition perfectly capable of perforating almost all forms of armour on the battlefield, regardless of operating range. The low profile of the T-64B allows it to avoid detection and utilize forms of cover that other tanks cannot hide behind. The T-64B can be differentiated from the T-64A by the lack of the side extrusion panels, however is visually extremely similar to the T-80B and it's often hard to differentiate, especially when the armour package is applied. The T-64B gains a pintle-mounted machine gun which can prove useful as a deterrent against CAS and some light vehicles.

With the "Kontakt-1" ERA upgrade, the tank's appearance drastically changes. The ERA is fitted in a "pike" or triangular prism shape. The hull is also different as its covered with ERA and thee distinctive triangle at the front is gone. There is also an extra armour plate on the lower plate.

125 mm 2A46M-1 cannon
Two-plane stabilizer
Reduces the swing of the gun in two planes while moving
Autoloader
Automatically feeds projectiles into the breech. The speed does not depend on the skills of the loader
Ammunition36 rounds
First-order28 rounds
Reload7.1 s
Vertical guidance-6° / 14°
Main article: 2A46M-1 (125 mm) 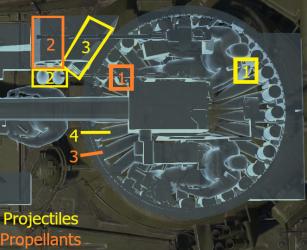 The T-64B performs optimally as a sniper or support tank, utilising the low profile and long-range weapon performance. While the armour of the T-64B was good for it's time, many later vehicles can fairly reliably penetrate the UFP, even through the composite armour. The gun performs well, with a good variety of ammunition, an autoloader for reliable reload times (even when a crew member is knocked, or putting out fires) and extremely high round velocity for long-range ease of use.

The T-64B can be used as a brawling tank but positioning is key - wherever possible, the LFP should not be exposed, and due to the abysmally low reverse speed, there's usually no escape from a sticky situation. Play carefully in close quarters environments, letting targets move into your gunsights rather than vice versa.

Keep in mind that the vehicle is relatively slow, so you'll often be one of the last into battle. This gives you an opportunity to exploit known intel - where your teammates have been shot/destroyed from, primarily - which can be used to position, ready for pushing enemy tanks.

One of the later upgrades available to the T-64B is the "additional protection" upgrade, which covers the frontal hull and turret with "Kontakt-1" ERA. This adds a huge amount of protection to the vehicle specifically against chemical rounds. While it's uncommon to see top rank MBTs use HEAT rounds, it can prove useful when facing IFVs/ATGM carriers, or in many cases, helicopters with ATGMs. The weight increase is often well worth the benefits of the BV upgrade.

Disable its gun: the gun mantlet is very weak against top tier shells so it will be destroyed. Even if a shell can penetrate the composite armour, make sure the T-64B can not hit you back as it will penetrate most vehicles it can face. The driver port does not contain composite armour. Rounds with 200 mm of penetration can penetrate effectively, almost guaranteeing a kill. However at long ranges this is a very small target so try and hit the T-64B's gun. The lower plate is a very big weak spot as there is no composite armour there. Any top tier shell will penetrate at close to medium range. However at long ranges the lower plate is a very small target so try and disable the T-64B's gun. Vehicles such as the Type-90 or Ariete C1 are capable of punching straight through the hull composite armour.

Fighting the T-64BV (T-64B with "Kontakt-1" ERA) is a different situation. With the ERA, protection against chemical is 850 mm and above meaning it can stop the HOT missile and DM12 HEAT-FS. If you have an auto-cannon fire at the ERA to destroy it. Once it is gone you the value will drop to 500 mm against chemical rounds. In some cases, a if a projectile with lots of explosive hits the breech or the ERA on turret, some shrapnel will deflect downwards into the ammunition, destroying the tank even though the projectile was stopped. However, the provides minimal protection against kinetic rounds.

The T-64B or Object 447 was an improvement to the currently existing T-64A and T-72A. The T-64B model was now fitted with a better laser range finder along with improved fire control systems. In addition, it had the 2A46M-1 cannon (aka the D-81TM gun) with a 2E26M stabilizer, 6ETs40 autoloader, 1A33 FCS (fire control system) comprising a ballistic calculator, and a sight with laser telemetry and cross-wind sensor. The ATGMs were eight 9M112 "Kobra" (radio-guided, NATO "AT-8 Songster"). The turret armour had a new design consisting of ceramic balls designed to absorb or reduce chemical munitions. However the T-64B still had the unreliable and complicated 5TDF engine. Designers added a more powerful engine which led to the T-72B and T-80 series.

Although there is no hard evidence, some sources saw the T-64B saw action in Afghanistan in the 1980s. This could have been for testing but there are no official records. Russia had 4,000 T-64Bs, but 2,000 were put out of service in 2000 and used for scrap. The T-64B and BV-1 model is currently used by The Democratic Republic of Congo. 50 were purchased from Ukraine in 2014. The T-64B saw heavy action in the 2014 Ukraine Civil War and Invasion of Crimea. 17 T-64B were confirmed destroyed, including the "Bulat" model. Ukraine is now upgrading there there fleet of T-64B to a more modernized version called the T-64BM "Bulat"