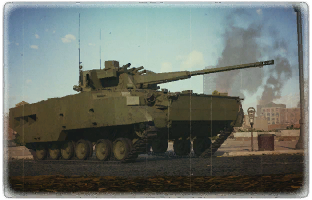 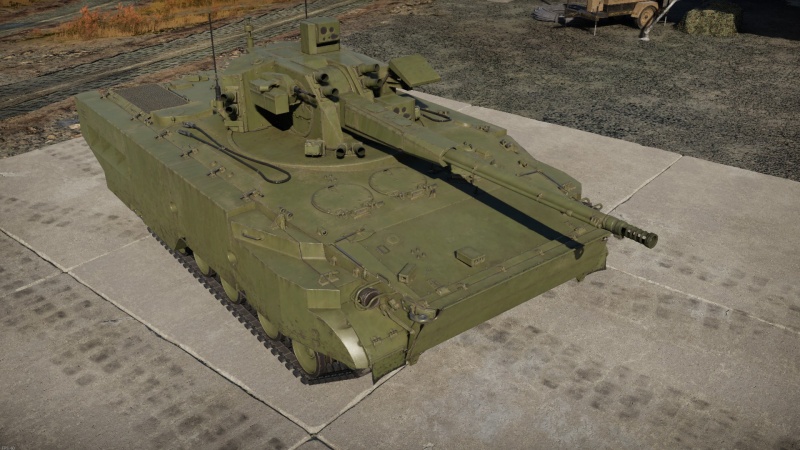 The 2S38 is a premium rank VI Soviet light tank with a battle rating of 9.7 (AB/RB/SB). It was introduced in Update "Fire and Ice".

Built on the BMP-3 platform, the 2S38 was an attempt to transform the platform into a self-propelled anti-aircraft gun with a 57 mm autocannon and a tracking system capable of fighting low-flying aircraft. In the game, the rapid-firing 57 mm autocannon allows the 2S38 to engage a wide range of enemies from tanks to fighter jets while maintaining the same profile and mobility of the original BMP-3.

The 2S38 armour is essentially non-existent for the rank it is in. While the front array may be resistant to some autocannons from a long-distance, it isn't really reliable.

The rearranged modules within the 2S38 does improve the vehicle's overall survivability compared to the BMP-3 however. Firstly, the ammunition is a lot smaller and harder to hit, and they are all stored in the center so can be harder to hit if not precisely targetted. There are more empty space within the 2S38 as well, increasing the chances of a shot penetrating the armour, but not causing any critical damages to the components.

The crew are all arranged in the front, three in a row. This improves crew survivability in hull-down position as there is no crew in the turret anymore. This also marginally improves survivability to shots from the front, as there is a small chance a shot from the front does not knock out two or all the crew members in one shot. Given both the gunner and commander can fire the main gun, enemies would need to knock out both of them at the same time to disable the 2S38's armaments.

Overall, the 2S38 is favored comparatively to the BMP-3 in terms of being able to survive the first shot while also retaining the ability to fire back at the offending opponent.

The 2S38 drives like the BMP-3. Namely, it is fast and accelerates well even in cross-country terrain. Travelling on long-distance maps will not be an issue for the 2S38. The only significant difference is that the 2S38 weights about 2.8 t more than the BMP-3, and so the small weight difference may affect the fine acceleration and forward momentum, but not by much.

57 mm 2A90 cannon
Two-plane stabilizer
Reduces the swing of the gun in two planes while moving
Autoloader
Automatically feeds projectiles into the breech. The speed does not depend on the skills of the loader
Ammunition148 rounds
First-order20 rounds
Reload0.5 s
Vertical guidance-5° / 75°
Main article: 2A90 (57 mm)

The 57 mm 2A90 is a dual-purpose autocannon and can allow players to use it in both an anti-tank and anti-aircraft gun. While its top penetration for the anti-tank role is not ideal, with a point-blank penetration of 225 mm with the 3UBM22 APFSDS rounds, the rapid fire nature of the 57 mm gun means that quick follow-up shot from the first successful penetration can cripple, if not destroy, the enemy tank.

If firing at a tank's side armour, firing the BR-281 APCBC round with explosive filler can be considered to absolutely devastate the enemy interior with fewer shots. It would trade maximum penetration of the round, so it is up to player preference on which ammunition to useif aiming at tank side armour. 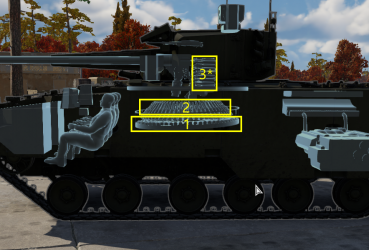 The 2S38 is played like a standard light tank: use your mobility and speed to flank enemies, and your gun is powerful enough to penetrate most tank's side and back armour. The gun has a very short reload time, at an astounding 0.5 s. The 2S38 has proximity-fused HE shells, allowing it to fire at helicopters and other aircraft to some effect.

In the mid 2010s, the Central Scientific Research Institute Burevestnik in Nizhny Novgorod, Russia, developed an artillery turret with a 57mm cannon, designed for ships and armored vehicles. A little later, the module was upgraded for installation on the 2S38 platform (a modified version of the BMP-3 AFV chassis). The first prototype was demonstrated to the public in 2018, in 2020 2S38s took part in the Victory Day parade on Red Square in Moscow. At the moment, the vehicle is being commissioned for service with the Russian army.