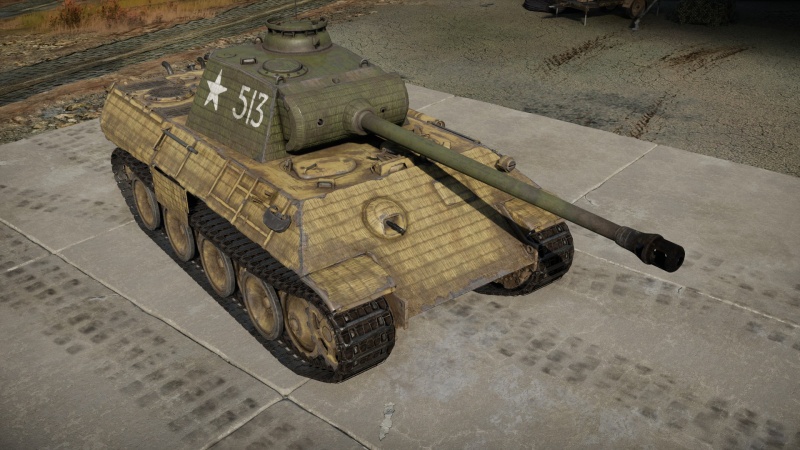 The ▂T-V (also seen as "Panther" in-game) is a premium gift rank III Soviet medium tank with a battle rating of 6.0 (AB) and 5.7 (RB/SB). It was available as a prize during the 2015 Thunder League eSports tournament, first as a giveaway prize for watching the Twitch stream, but then every Dog-Tag owner for the tournament earned one when the tournament prize pool reached its $50,000 goal. Though it has the external looks and automotive performance of a Panther Ausf. A, it does not have access to APCR, unlike its German counterpart. As a premium Panther tank in-game, it is a deadly opponent in the battlefield.

Like early Panthers, the T-V features a broad, sloped upper glacis, and the curved gun mantlet. 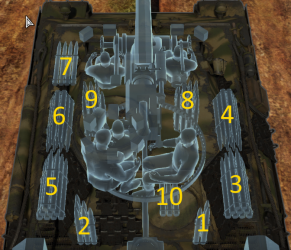 The T-V is a Soviet captured Panther A. It offers good speed and handling, along with a amazing 75 mm KwK42 cannon. The cannon is able to knock out any tank with a single shot, as it is one of the best guns in the game. One of its best shells is the PzGr 39/42, as this round offers 28.9 grams of explosive filler. Make use of the KwK 42's high muzzle velocity and potent penetration values to engage enemy from a distance in order to minimize the likelihood they hit the T-V's frontal weak points. When in combat, do not expose your sides or the sides and rear of your turret, as an enemy round will easily be able to penetrate your tank.

The T-V has a good reload of up to 7.8 seconds. The T-V lacks any anti-aircraft protection, as it does not offer any roof mounted machine guns that can help deter enemy attackers.

In order to stay alive, use the terrain and objects on the map to hide and keep your presence reduced. This will allow for the enemy rounds to bounce off, mitigating the chances of a penetration. If an enemy round does indeed penetrate the front, either the driver and transmission will be knocked out, or the ammunition in the front storage bins will be destroyed and possibly ammo racking the tank.

The types of equipment the Soviet captured were guns, clothing, material, and armoured vehicles. Some of the tanks the Soviets captured were Panzer IIIs, StuG IIIs, Panzer IVs, Panthers, and even the Tiger I and II heavy tanks. The Soviets employed some of the captured tanks in their own combat ranks, such as the Panzer IIIs as the T-III, and even the Panthers under the designation T-V (or T-5).[1]

The Soviets usage of the Panthers in their ranks is actually quite rare due to a few reasons, the Panthers were difficult to maintain and with a lack of logistics from the Soviet industry, there would be a shortage in spare parts, ammunition, and fuel. Several commanders of the 4th Tank Army had a low opinion of employing enemy tanks, due to these reasons. They suggested that if necessary, they should make use of the Panzer IVs (T-4) instead for the same role. Nevertheless, the 4th Tank Army ended up using the Panther tank in their own ranks, the only recorded usage of Panthers in a Soviet tank unit.

The Panthers were given to most notably the 62nd Guards Heavy Tank Regiment and the 51st Independent Motorcycle Regiment. The units were only given intact Panthers which were to be used until they broke down, at which point the Panthers would be abandoned and the unit refitted with better, more reliable tanks. The units using the Panthers were very aware of the Panther's defects, especially its weak final drive which is the tanks most common mechanical issue. Despite that, one incident reported that a Panther unit was able to travel 600 km through unfavorable terrain and battle before breaking down with an engine fire (with Panther's final drive's life expectancy only being 150 km). The units did not suffer fuel deficiency due to their usage of other gasoline-run Lend-Lease vehicles, giving them more gasoline than a typical Soviet tank unit. The unit also solved their spare parts issue, by simply scavenging a second, worn-down Panther for parts to fix a more intact one.[1] There was an attempt to ease the ammo issue by adapting the turret to hold the 85 mm D-5 gun on the Soviet's T-34-85, but this did not go through, possibly due to the inevitable end of the war.[2]

In the battlefield, the Panthers were repainted with very prominent paint jobs and Soviet emblems to avoid being targeted by friendly units with more common Soviet tanks such as the T-34. The Panthers were used by the Soviets all the way, up to early 1945. After which the remaining Panthers are either stored away at collection points or sent to the scrap yard. Romania received 13 Panther tanks from the Soviet Union in May 1946 which served until 1950.

Other members of the Panther tank family