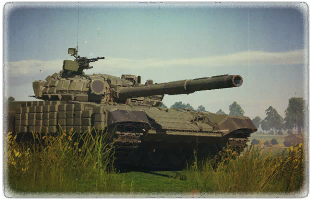 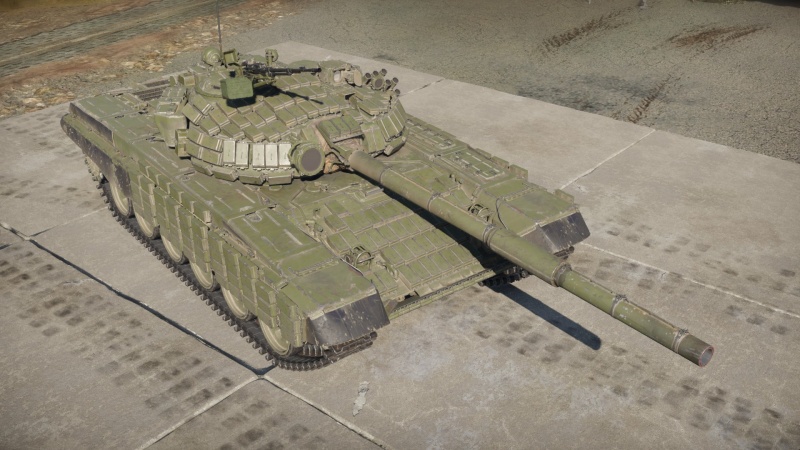 The T-72B is an up-armoured and up-gunned version of the T-72A, although this still does not protect the "weak spots" that most Soviet tanks have (weak lower front plate, driver optics etc.). The T-72B has more armour on the upper plate of the hull, that provides around 500 mm to 900 mm of effective armour protection.

The T-72B is a slow and sluggish tank which has poor acceleration and handling. It has really poor reverse speed as well as hull traverse. However, it has a powerful engine which makes it capable of pulling and pushing enemy tanks as well as moving through rough terrain with ease. It does not have enough horsepower to climb over steep elevations. Speed-wise, it has a decent top speed (~60-70 km/h) which it can reach under specific situations.

The T-72B is armed with the same 125 mm cannon found in the T-80B, with its 3BM42 "Mango" round proving competitive against other Rank VII offerings. As with previous Russian MBTs, the main gun is auto-loaded, so the loss of a crew member does not affect the loading times and the 7.1-second loading speed is competitive when compared to the 120 mm guns on the Leopard 2A5 and M1A2 Abrams. One notable perk of the auto-loader mechanism is that the gun will be reloaded even if the gunner is knocked out, if you're fighting a fire, or repairing. It does however also come with the drawbacks of a reload time that cannot be improved, the large ammo carousel concentric with the turret, and the chance of a single penetrating shot detonating the ammo racks. Another thing to note, since update 1.97 if the tank's battery runs out of power, the auto loader will not function and the cannon will need to be manually loaded, which is a much slower process.

As with the T-80B and T-64B, the T-72B can launch missiles out of its gun. Unlike the previous two vehicles though, it gets the upgraded 9M119 which has 700 mm of penetration compared to the previous ATGM's 650 mm penetration. These ATGM's can prove useful for shooting over hills to hit a hiding enemy or to engage helicopters or low-flying aircraft. 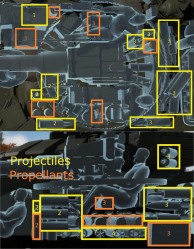 The T-72B has access to a coaxial PKT 7.76 mm machine gun and a 12.7 mm NSVT anti-aircraft machine gun, which is mounted above the commander's hatch. The PKT is rarely useful in top tier matches, but the NSVT can be quite useful. The NSVT has 29 mm of penetration, allowing it to damage some light vehicles like IFVs and enemy SPAA. Additionally it is useful to engage enemy helicopters when they come close. Machine guns can also be used to try and shoot down enemy ATGMs, but this is unreliable. They can also be used to shoot the ground in front of the tank for a quick smoke screen of sorts, confusing the enemy and blocking their view for a clean shot.

The T-72B playstyle is near identical to the T-64B (and subsequent Soviet MBTs). One of the key differences between the two vehicles is the T-72B's stronger armour. Thanks to the laser rangefinder, the T-72B is able to be a hulldown sniper as the high muzzle velocity of the dart and access to ATGM make it easier. However, it should be noted it has no access to thermals or a high magnifying zoom (8x only).

The T-72 was one of the most famous and widely produced Soviet main battle tanks of the Cold War era. Originating as a modification of the T-64, the T-72 retained its predecessor's composite armour, 125 mm smoothbore cannon, and compact dimensions, all modern features for the time. But it was intended to be easier to produce and maintain than the complex and unreliable T-64. Instead of the T-64's opposed piston engine, which promised high power in a compact package but turned out to be a mechanical nightmare, the T-72 used a more traditional V-46 engine with larger dimensions. The engine compartment and suspension were redesigned to suit the new engine. The original T-64 "MZ" autoloader was replaced with the "AZ" autoloader, which stored ammunition in two horizontal trays. The T-72 began to equip standard tank divisions and motorized units while elite units retained the T-64. The combat capabilities of the initial T-72 were very close despite its origin as a somewhat simplified T-64, as the heavier weight was compensated for by the greater engine power. The T-64 tended to have more advanced optics and fire control systems over its service life, and the later T-80 had much superior mobility, but the simple cost effectiveness and reliability of the T-72 made it an excellent tank for widespread deployment and export. It remains in service worldwide in many different variants and has arguably been a more successful design than its ostensibly higher-tech relatives.

The T-72B variant first appeared in 1985. At this time, the preceding T-72A had shown its age. The newest NATO tanks had guns and ammunition capable of penetrating early Soviet composite armour and the T-72A's fire control system was lacking. The T-64B, introduced several years earlier, had improved armour and a new fire control system capable of supporting gun-launched ATGMs like the 9M112 "Kobra". The T-72B set out to meet these standards.

As part of the improvements, the protection was improved dramatically. The turret was constructed with high hardness steel and improved "Super Dolly Parton" composite armour that bulged the turret cheeks even further. The increased volume necessitated cuts underneath the turret cheeks/sides to allow the driver to open his hatch if the turret was rotated. The composite armour used polymer and steel NERA layers much like the Leopard 2 and M1 Abrams instead of the "Kvartz" ceramic filler used on earlier T-72As. This provided improved chemical protection on par with these two NATO MBTs and also easier serviceability: the NERA plates could be accessed and replaced in the field if damaged, whereas the sintered quartz blocks were cast with the turret in the factory and could not be repaired. Kinetic protection was increased to a reported figure of 550 mm RHA equivalent.

The hull composite armour was switched to a new 60-10-10-20-20-50 configuration: a 60 mm front plate, four high hardness plates of 10 mm and 20 mm thickness, and a 50 mm back plate. While this is technically spaced armour instead of composite armour, it offered significant improvements in kinetic protection over the older textolite composition. In fact, comparative testing of the T-72B's glacis armour and the T-80BV's configuration showed that it was immune to even overpressure shots using 3BM32 "Vant" depleted uranium APFSDS, which penetrated the T-80BV using standard charges. Chemical protection was also improved and the T-72B's upper glacis was capable of resisting HEAT-FS rounds, man-portable ATGMs, and older full-size ATGMs.

The armour upgrades played a large role in increasing the T-72B's weight to about 43 tons at combat weight compared to the T-72A's 41 tons. To cope with this, a V-84 engine producing 840 horsepower was installed. It was a close derivative of the V-46 and in theory should have been very easy to retrofit to existing T-72s. However, its increased power and heat generation required modifications to the T-72B design. An engineer recalled that the V-84 somehow developed less power than the V-46 when installed in the T-72A.

The T-72B received a new 1A40-1 sighting complex with a lead calculator, improved laser rangefinder, and support for 9M119 "Svir" gun-launched ATGMs through an improved night sight. The gunner could lase a moving target while looking down the sight and the system would calculate and display how many mils to lead by in a secondary eyepiece. From the gunner's view, the calculation result would be superimposed on the sight view. This made it easier for the tank to engage moving targets, which previously was unassisted on early T-72A models, but the system was not precise enough for reliable long distance shooting and lagged behind the M60A3's fire control system in ease of use.

Other minor changes included modifications to the autoloader to accommodate the Svir ATGMs and an improved 2E42-2 "Zhasmin" stabilizer system with an electric drive instead of hydraulics. The vehicle represented in War Thunder is equipped with Kontakt-1 explosive reactive armour, which became standard for T-72Bs out of the factory. The turret ERA was no longer mounted on brackets as on the T-64B or T-72AV, instead being placed directly on the turret surface. This more haphazard arrangement increased the coverage of the ERA but slightly decreased effectiveness due to suboptimal sloping towards incoming fire. Still, a T-72B with Kontakt-1 was virtually immune to single-charge chemical munitions. Later production variants were capable of equipping improved Kontakt-5 ERA, which in turn made them resistant to even the best NATO APFSDS rounds at the time.

The T-72B successfully addressed the immediate problems facing the T-72A. The protection now matched or exceeded the new NATO MBTs that were capable of dispatching the previous model and the fire control upgrades provided a welcome increase in offensive capabilities. This was achieved without sacrificing ease of production and the T-72B was widely produced and exported like prior models. No improvements were made to its mobility, which was now exceeded by the Abrams and Leopard 2, and the fire control system was still inferior to Western tanks. Still, it provided a solid foundation for modernizations like the T-72B3 and will likely stay in service for the next few decades. The famous T-90 had its beginnings as an upgraded "T-72BU" as well.

The T-72B did not see any combat with the Soviet Union. The succeeding Russian Federation has used the T-72B in Chechenya, Georgia, and elsewhere. Other customers and current users of the T-72B include Armenia, Azerbaijan, Belarus, Laos, Morocco, and Syria.

By the middle of the 1980s, there was an objective need to upgrade the main battle tank of the Soviet Union - T-72 to modern battle performance values. The fact is that the vehicle seriously lacked firepower and modern fire control systems and its protection which wasn't bad at the time of conception, became obsolete due to the emergence of new powerful weapons. The big tank modernization program implied a comprehensive improvement of the T-72 in all its key characteristics.

In the early 80s, the guided weapon system under the name "Svir" was developed for the Soviet tanks with the ability to guide the missile via beam and launching it through the gun barrel. At the same time there was also work on development of the first generation of the "Contact-1" explosive reactive armour. Both of these novelties were in demand for the modernization of the T-72. The vehicle received a new combined hull armour pack for the upper frontal part which increases in size and its composition has been redistributed toward more steel. Also a new custom turret with larger dimensions has been installed, featuring new armour filler packs.

Due to an increased weight, the tank required a new engine which allowed it to maintain the good running characteristics of the base model. The upgraded version received the designation T-72B and was adopted in December 1984. This modification became the basis for a large number of versions and upgrades which made the T-72 the most mass produced 2nd generation MBT in the world. As an upgraded version this tank continues to serve in the Russian army and many other countries.