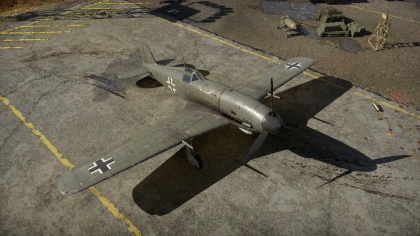 Thanks to the powerful DB 603 and general aerodynamic improvements from the previous G.55, the G.56 will be a competitive aircraft in almost any role you put it in. Low-altitude, medium-altitude, high-altitude, energy fighting, Boom-&-Zoom or (in some cases) turn-fighting, the Super Centauro can do it all! However, your ideal flying style should be as a more reserved medium to high altitude energy fighter, as this is the area the aircraft excels the most in. One should always keep their speed up, a minimum of 370 km/h (230 mph), as this allows you to whip your nose around with alarming speed and bug out of unfavourable scenarios. It is important to note that the G.56 can very quickly bleed velocity in high-speed horizontal turns, and you may find yourself struggling to regain it.

One does not have to worry about the ammunition of the aircraft, as you are given an absurd 800 rounds total (300 in the nose-mounted gun plus 500 in the two wing-mounted guns) and have access to the universally feared minengeschoß round that will destroy anything in a few well-placed hits

Beneath the sleek and eye-pleasing design of the Super Centauro lies a monster of a plane if piloted well. The aircraft's main strength is not its armament, speed, manoeuvrability or climb rate (which are great in their own rights), but how easily it can set up an attack on an enemy. Your primary method of battle should be energy fighting at a middle or high altitude so you can keep up your potential energy while also making the most out of the aircraft's engine. You can dictate the flow of the battle by staying around 5,000 - 6,000 meters due to the ability to choose your fights easily; you can dive in and shred your targets, then be gone before anyone knows what happened. If an enemy tries to intercept you, pay attention to the aircraft they're flying and adjust accordingly, then engage on your terms. If they are approaching from below, pull up into a stall climb or vertical spiral to make them waste their energy then pounce while they're recovering, and if they are approaching from above, attempt to get them to overshoot and follow through.

The weakest flying style the G.56 can be put into is in a low-altitude combat scenario, where it can't abuse its excellent supercharged engine and doesn't have the altitude to dive so it can escape. It is a generally safe idea to avoid these scenarios and climb to get your advantages back and you won't be torn to shreds by the hordes of enemies that will flock to your location due to seeing you as easy prey.

The G.56 is also adept at dealing with bombers thanks to its excellent performance and powerful armament layout that can easily tear through the large bodies of strategic bombers. When engaging a bomber, it is best to either approach from the front to get a pilot snipe or approach from below and aim for the wings or engines, as it can't get very far without these. "Oh, it has weak guns, I can tail it." If these words enter your mind, throw them out immediately. Never tail any bomber, no matter how "weak" its defensive armament maybe, as this mindset can lead to some embarrassing deaths regardless of the skill of the pilot in question.