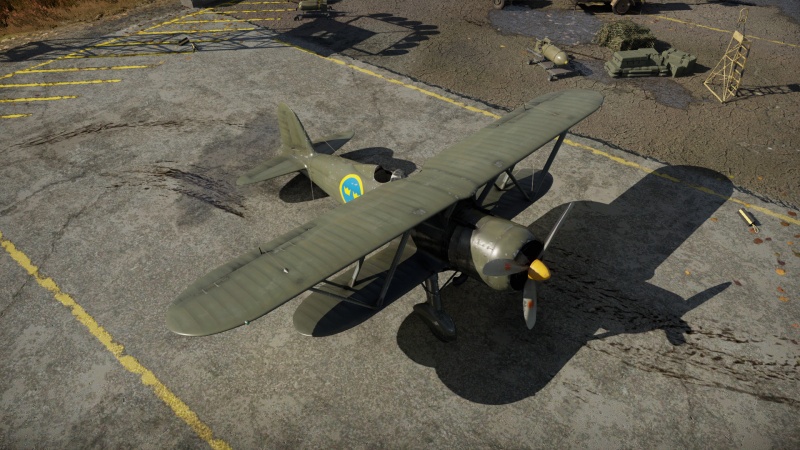 The J11 is a rank one Swedish fighter with 2 x 12.7 mm Akan m/40 machine guns, which are devastating when they hit an enemy biplane but they have a slow rate of fire. The plane has a high top speed which can outrun most biplanes at its rank, when fully upgraded.

The J11 plays identical to the Italian counterpart, capable of high speeds without sacrificing the agility a biplane offers. The engine is almost twice as powerful compared to the J6B found before it, and the strong framework allows for even higher speeds, allowing the J11 to chase down opponents in battle. Most importantly, however, is that the J11 offers greater climb and energy retention, allowing for a bit more boom & zoom compared to other biplanes. The J11 turns a bit worse than other biplanes, which is logical considering the powerful engine and heavy steel structure it features. This makes extended dogfights against other biplanes difficult, but should be avoidable by most J11 players if speed is kept at an all-time high.

One large downside to this J11 is the firepower. The Akan. m/40 are identical to the Italian guns found on the CR.42. Although the calibre is 12.7 mm, the Italian guns are quite lacklustre in performance due to the ammunition used. This requires the J11 to put a lot of gun-time down compared to planes such as the J8A, which is incredibly potent at dealing with biplanes. The guns are still have some tricks up their sleeve, especially when it comes to wing, and engine damage. The .50 cal ammunition can spread damage effectively, allowing for high wing-root damage, and the higher penetration and calibre size allows for additional damage to engine components, which are crucial at this BR.

The J11, also known as the Fiat C.R.42, is an Italian-made fighter that was bought and maintained by the Swedish Air force "Svenska Flygvapnet" in the late 1930's. As World War 2 broke out, the Swedish air force felt the necessity to increase its air defence and yet due to the ban on exporting weapons and war machines during the war the Air force was relying on older and less capable fighters. When Italy showed interest in selling the Fiat C.R.42 the Air force placed an order of 120 planes and named the aircraft "J11". While the plane was mainly used as a fighter, it could also serve as a scout/recon vehicle. During the war the J11 was already outdated and could not withstand the superior German fighters and it was made with poor quality forcing most of the aircraft to become scrap metal. Today, few stand unharmed or restored and are located in aircraft museums around Sweden.